SAN FRANCISCO (KPIX 5) – San Francisco police are being accused of brutality in a case that involved a bicyclist at the Valencia Gardens public housing complex in the city’s Mission Dolores neighborhood on Friday afternoon.
D’Paris Charles “DJ” Williams, 20, was arrested after apparently riding his bicycle on the sidewalk around 3:40 p.m. Friday at the complex near Rosa Parks Lane and Maxwell Court.
The home video begins with DJ Williams face down on the sidewalk as officers and a crowd of onlookers circles. Williams can be heard crying out in pain.
When word spread in the neighboring apartment complex, residents rushed out to help Williams. That’s when things went from bad to worse. The arrest spurred an altercation between other people at the complex and prompted three more arrests, police said.

However, a friend of Williams, local photographer Travis Jensen, talked to people at the complex and said their stories, as well as a cellphone video taken at the scene and posted on YouTube, show that the incident was a case of police brutality.
“Clearly something not right is happening here,” Jensen said.
He said Williams was simply riding his bike on the sidewalk up to his residence in the complex when he was approached by undercover officers who said something about riding on the sidewalk, then grabbed him from behind and beat him for no apparent reason.
Jensen said witnesses at the scene said Williams suffered a broken jaw and other injuries when he was attacked by police.
He said when others joined in, it was out of concern for Williams.
“People don’t get that upset for no reason. They were upset because they were seeing DJ getting beaten,” Jensen said. 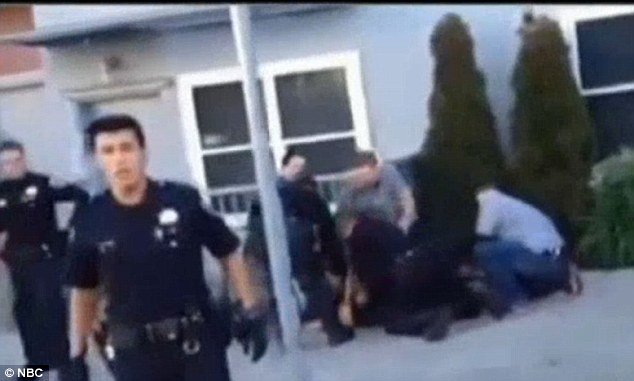 ‘Brutality’: People filmed the arrests on their phones and it has sparked claims of police brutality


Police spokesman Officer Gordon Shyy said the incident started when Williams tried to flee into a residence after plainclothes officers tried to stop him for a vehicle code violation.
He then allegedly resisted the officers, who used “reasonable force” and arrested him, Shyy said.
“They attempted to detain him. However he became combative and resisted arrest,” said officer Shyy.
A hostile crowd then gathered around the officers, two of whom suffered injuries in the scrum. One person tried to hit an officer with a cane while another bit an officer, according to Shyy.
A total of four people, including Williams, were arrested, Shyy said. Williams and another person were arrested for felonies, one was arrested for a misdemeanor and the fourth was cited and released.
Williams was booked into custody on suspicion of assault and battery on an officer, felony resisting arrest, a traffic code violation and an outstanding local warrant, Shyy said. 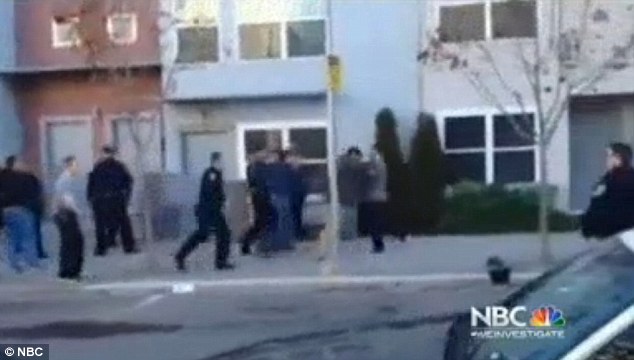 Altercation: Several people can be heard shouting and screaming in the video


The video showed the 21-year-old handcuffed and sent to jail with his earbuds still hanging from his neck, his face a bloody mess.
It was not clear if Williams ever heard demands from police.
Williams is expected to be released from jail late Monday night. His family told KPIX 5 they plan to file a complaint against the department and hold a rally in the Mission District around 5 p.m. on Tuesday.

Gandhi was racist against blacks