updated 2:50 PM EST, Wed December 5, 2012
Editor’s note: This story contains language that some readers may consider offensive.
(CNN) — A fourth man has pleaded guilty to a federal hate crime in the death of a black man who was beaten by a gang of young whites, then run over by a pickup truck driven by one of them in Mississippi in 2011.
In a separate but related case, another Mississippi man admitted he was part of a group of whites who carried out other racial attacks against African-Americans around the same time.
William Kirk Montgomery, 23, from Puckett, Mississippi, pleaded guilty Tuesday to federal hate-crime charges in the death of James Craig Anderson, who was murdered on June 26, 2011, in Jackson, Mississippi, the prosecutor says. Jonathan Gaskamp, 20, admitted to two federal hate crime charges in other attacks carried out on other African-Americans in or around Jackson.
James Craig Anderson, 47, died after he was beaten and run over by a truck driven by Deryl Dedmon, who was part of a group of seven whites, mostly teenagers, from largely white Rankin County who decided to “go f**k with some n*****s” after a night of partying and drinking, law enforcement officials have said, quoting some of the suspects in the case.
Life sentence in Mississippi hate crime case
Montgomery was one of the ones who left that party in search of a victim. Anderson, a worker at a local auto plant, was outside a Jackson hotel when he was confronted by the group. 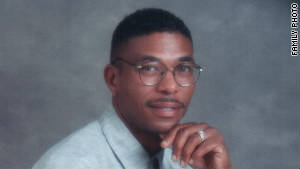 Auto plant worker James Craig Anderson was run over and killed by a group of white teens last year.

Anderson’s death became national news after CNN obtained and aired videotape capturing the gruesome murder as it happened.
The death of the black man, and the shocking videotape showing the murder, prompted several large marches and prayer vigils in Jackson, a city of about 537,000 people.
On the videotape, two vehicles carrying the group of whites pull into the parking lot and stop where Anderson is standing, although he is just off camera and not visible. The young men can then be seen going back and forth between their cars and Anderson. Witnesses told authorities this is when Anderson’s beating took place, as the whites yelled racial epithets, including “white power.”
On the videotape, Anderson first comes into view in the lower right corner of the screen, after he was beaten, according to police. He staggers into the headlights of the green F-250 truck, his white shirt easily visible. The truck backs up, then suddenly surges forward. As the truck nears the defenseless man, its headlights glow brightly on his shirt before he suddenly disappears underneath it.
Three of the other whites who were there that night pleaded guilty to federal hate crimes earlier this year. Dedmon, John Aaron Rice and Dylan Butler, all now around age 20, each admitted to conspiracy and violating the 2009 federal hate-crimes law. They face sentences of up to life in prison and $250,000 in fines, federal prosecutors said. Dedmon also pleaded guilty to state murder and hate-crime charges in a state court and was sentenced to life in prison.
Murder suspect carried ‘backpack of hatred’
Gaskamp was at a party with the others when they discussed going out to hunt and hurt blacks on the night Anderson was killed, authorities said, but he was not present when the group came upon Anderson. However, he was present at other attacks at other times, prosecutors now say.
CNN had reported previously that the attack on Anderson was only one of a number of racial attacks carried out by the gang of young whites and others who were with them at various times, based on witness accounts and sources close to the investigation. Prosecutors have long told CNN that the additional attacks might bring more arrests or charges.

Various groupings of the young men would, at various times, hunt out and target blacks, or others who appeared homeless or drunk, prosecutors said. These people were likely targeted, authorities said, because the group members believed they would be less likely to report attacks to police or to fight back.
In these other attacks, according to prosecutors Tuesday, the group of white young men, sometimes along with young women, on numerous occasions drove from Rankin County, which is mostly white, over to Jackson, which is mostly black, specifically with the intent of assaulting blacks. Group members would often boast about what they had done later, prosecutors said.

In late 2011 CNN filmed an interview with one former member of the gang who had changed his ways and felt bad about their behavior. That former member told CNN on camera that the group of whites would “go out hunting” for blacks to hurt on weekends. But until Gaskamp’s plea Tuesday, no details of such attacks had been made public, or had even been substantiated.
In one of the other incidents the gang carried out, prosecutors say, Gaskamp and other white teens drove to Jackson to find an African-American to assault, and Gaskamp brought with him a .40-caliber handgun. The group hurled beer bottles at numerous black pedestrians they ran across. Then, after seeing one black man who appeared to be drunk, a group of white teens set upon him, according to prosecutors.
In that incident, prosecutors say, Dedmon, Rice and Gaskamp were among the ones who punched and kicked the man repeatedly on his face and all around his body, “until the man begged for his life.”
After the group left the man beaten and wounded on the street, Gaskamp wanted to go back “so that he could use the gun he had brought with him to shoot the African-American man they just assaulted,” according to court papers. But the group did not go back that night.
“These teens laughed and boasted about what they had done,” said Robert Shuler Smith, the district attorney for Jackson and the main prosecutor in the case.
And in court, federal prosecutor Sheldon Beer said, “Members of the group thought it was funny that the man pleaded for his life.”
Gaskamp could be sentenced to up to five years in prison for one count and 10 years for the other, Smith said. Montgomery faces up to five years for one count and up to life in prison for the other.
Prosecutors tell CNN there may be other arrests or charges.
“This case is not over,” Smith said. “This is still ongoing. We would like to pursue justice fully for the Anderson family. We want the Anderson family to be pleased at the end of this case that justice was done.”