ATLANTA — Buried in storage at a sprawling antebellum Georgia plantation is a film clip that has baseball enthusiasts buzzing.

At first glance, it looks ordinary. The grainy, out-of-focus black-and-white footage shows black men playing baseball in a grassy field for 26 seconds. Nobody hits a ball or runs toward a base.

But University of Georgia archivists say the film is remarkable for its age: If shot between 1917 and 1919, as they believe, it is the oldest known film of African-American baseball players.

“It’s truly a great find,” said Raymond Doswell, a curator at the Negro Leagues Baseball Museum in Kansas City, Mo. “We haven’t seen any black baseball footage from that era.”

The National Baseball Hall of Fame and Museum in Cooperstown, N.Y., has analyzed the film but not determined whether it is the oldest of its kind, said Craig Muder, a spokesman. 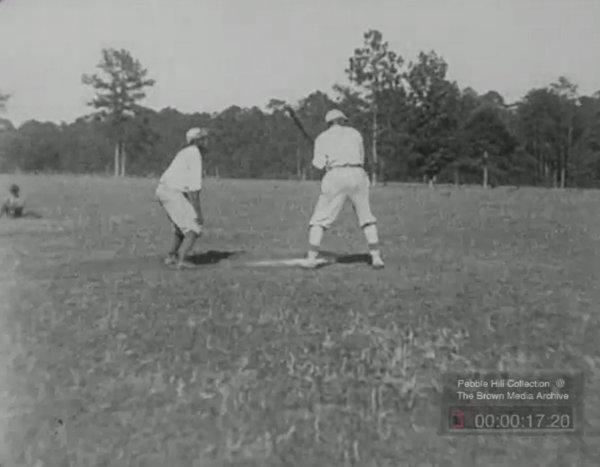 A film of black ballplayers, possibly around 1917, was found at the Pebble Hill Plantation in Thomasville, Ga., and given to the University of Georgia.

“Unfortunately our archivists do not have a point where they can say, ‘This is the first or this is among the first,’ ” Mr. Muder said. But historians there are continuing to analyze the film.

Blacks played baseball as early as the mid-19th century, historians say. They joined college teams with white players by the 1880s in the Midwest.

But no film had been found from before the creation of the Negro Leagues in 1920. The earliest came from a 1921 movie, “As the World Rolls On,” which has footage of an all-black Kansas team in the background.

The Georgia footage was donated to the university last year with 140 other reels by thePebble Hill Plantation, a 3,000-acre farm in Thomasville. For decades, they sat in boxes in a dusty room of the plantation’s main house.

Margaret A. Compton, an archivist at the university, said the baseball clip caught her eye as she scanned the hours of footage. Most home movies are of birthday parties or babies playing, she said. A baseball game at a Southern plantation featuring black players was different. “The first time I saw it, I thought, ‘Oh my God, this is really something special,’ ” she said.

With Barbara Cohenour, the manager of the plantation’s museum, she began piecing together clues about film clip’s age. Plantation records show that the property’s owner, Howard Melville Hanna, received the camera as a Christmas gift in 1915. The players’ uniforms closely resemble those in photographs taken at the plantation around 1917. An emblem in the final frames suggests the film stock was bought around that time.

The players were plantation employees, Ms. Cohenour said. Initials on the uniforms show that Pebble Hill was playing the neighboring Chinquapin Plantation. The games were recreational, not spectator sports, she said.

“We don’t know the players’ names,” Ms. Compton said. “But they might have been the horse trainers or the butlers or the chauffeurs — any jobs available at the plantations.”

Ms. Compton hopes other baseball experts will offer opinions and analysis. Mr. Doswell, of the Negro Leagues Baseball Museum, said he had never even heard of plantation workers playing one another in baseball.

Ms. Compton said she would be pleased if more footage was discovered. “I’m hoping someone says, ‘Hey, Grandma had one of those weird cameras, and our footage is even older.’ ”