Baboons can distinguish between written words and gibberish – and other apes can do multiplication and even make plans for the future.

The number of ape and monkey cognition studies has doubled in recent years, often with better technology and neuroscience paving the way to unusual discoveries.

Scientists think that many abilities – such as working out what others are thinking – are not exclusive to human beings.

‘It’s not a question of whether they think – it’s how they think,’ says Duke University scientist Brian Hare. 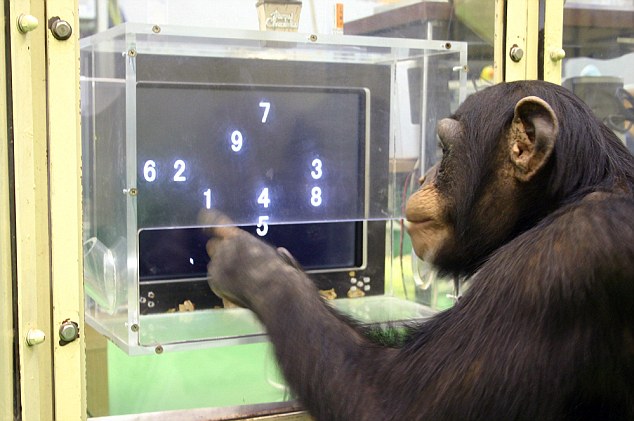 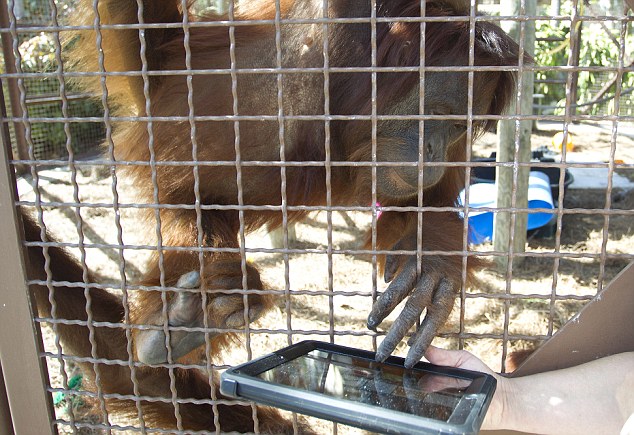 An orangutan presses symbols to communicate at Jungle Island in Miami. Experts who work with primates have been using sign language and other methods to communicate with apes for years

This month scientists mapping the DNA of the bonobo ape found that, like the chimp, bonobos are only 1.3 percent different from humans.

Says Josep Call, director of the primate research center at the Max Planck Institute in Germany: ‘Every year we discover things that we thought they could not do.’

Call says one of his recent more surprising studies showed that apes can set goals and follow through with them.

Orangutans and bonobos in a zoo were offered eight possible tools – two of which would help them get at some food.

At times when they chose the proper tool, researchers moved the apes to a different area before they could get the food, and then kept them waiting as much as 14 hours.

In nearly every case, when the apes realized they were being moved, they took their tool with them so they could use it to get food the next day, remembering that even after sleeping. 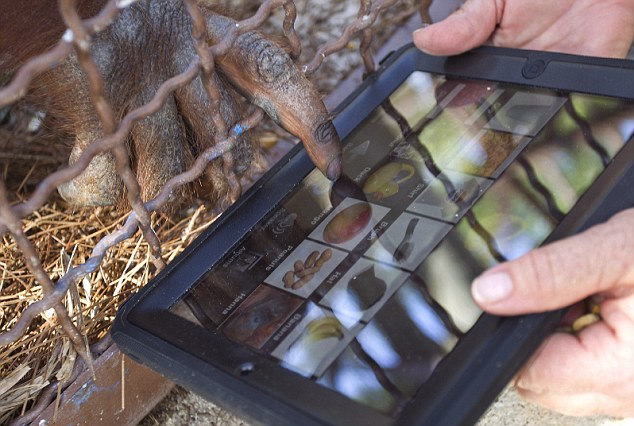 After being told a word, an orangutan points to that object on an iPad computer tablet at Jungle Island zoo in Miami

The goal and series of tasks didn’t leave the apes’ minds.

Call says this is similar to a person packing luggage a day before a trip: ‘For humans it’s such a central ability, it’s so important.’

For a few years, scientists have watched chimpanzees in zoos collect and store rocks as weapons for later use. In May, a study found they even add deception to the mix. They created haystacks to conceal their stash of stones from opponents, just like nations do with bombs.

Hare points to studies where competing chimpanzees enter an arena where one bit of food is hidden from view for only one chimp. The chimp that can see the hidden food, quickly learns that his foe can’t see it and uses that to his advantage, displaying the ability to perceive another ape’s situation. That’s a trait humans develop as toddlers, but something we thought other animals never got, Hare said.

And then there is the amazing monkey memory. 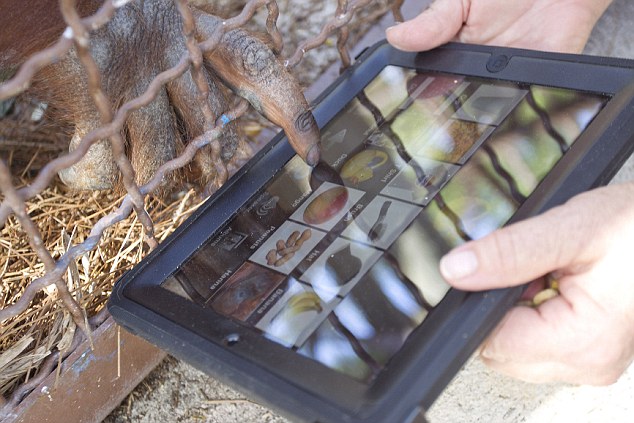 After being told a word, an orangutan points to that object on an iPad at Jungle Island in Miami 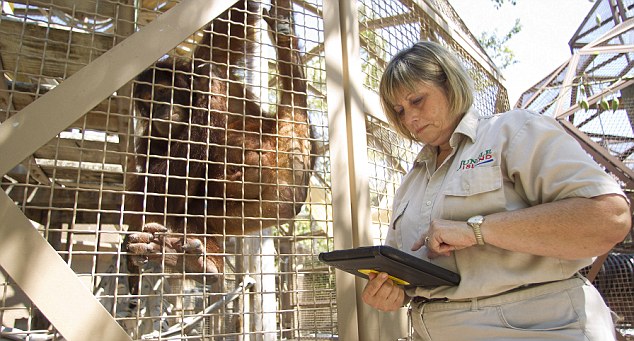 Jacobs says orangutans are extremely intelligent but limited by their physical inability to talk. Jacobs and other trainers at Jungle Island have developed strong relationships with the orangutans and hope to have them eventually use the iPads to communicate with other people

At the National Zoo in Washington, humans who try to match their recall skills with an orangutan’s are humbled. Zoo associate director Don Moore says: ‘I’ve got a Ph.D., for God’s sake, you would think I could out-think an orang and I can’t.’

In French research, at least two baboons kept memorizing so many pictures – several thousand – that after three years researchers ran out of time before the baboons reached their limit. Researcher Joel Fagot at the French National Center for Scientific Research figured they could memorize at least 10,000 and probably more.

And a chimp in Japan named Ayumu who sees strings of numbers flash on a screen for a split-second regularly beats humans at accurately duplicating the lineup. He’s a YouTube sensation, along with orangutans in a Miami zoo that use iPads.

The trend in research is to identify some new thinking skill that chimps can do, revealing that certain abilities are ‘not uniquely human,’ said Emory University primatologist Frans de Waal. Then the scientists find that same ability in other primates further removed from humans genetically. Then they see it in dogs and elephants.

‘Capacities that we think in humans are very special and complex are probably not so special and not so complex,’ de Waal said. ‘This research in animals elevates the animals, but it also brings down the humans…. If monkeys can do it and maybe dogs and other animals, maybe it’s not as complex as you think.’

At Duke, professor Elizabeth Brannon shows videos of monkeys that appear to be doing a ‘fuzzy representation’ of multiplication by following the number of dots that go into a box on a computer screen and choosing the right answer to come out of the box.

This is after they’ve already done addition and subtraction.

This spring in France, researchers showed that six baboons could distinguish between fake and real four-letter words – BRRU vs KITE, for example. And they chose to do these computer-based exercises of their own free will, either for fun or a snack.

One reason scientists are learning more about animal intellect is computers, including touch screens. In some cases, scientists are setting up banks of computers available to primates 24-7. In the French word recognition experiment, Fagot found he got more and better data when it was the baboons’ choice to work.

‘The apes in our case seem to be working better when they have that control, that choice to perform,’ he said.

In the French study, the baboons can recognize that the letters KITE make a word because through trial and error they learn which letters tend to go together in what order. But the baboons don’t have a clue of what KITE means. It’s that gap that’s key. ‘The boundaries are not as sharp as people think, but there are certain things you can’t overcome and language is one of them,’ said Columbia University animal cognition researcher Herbert Terrace.

And that leads to another difference, Ross said. Because apes lack language skills, they learn by watching and mimicking. Humans teach with language and explanation, which is faster and better, Ross said.

How free water in Britain could help hydrate Africa