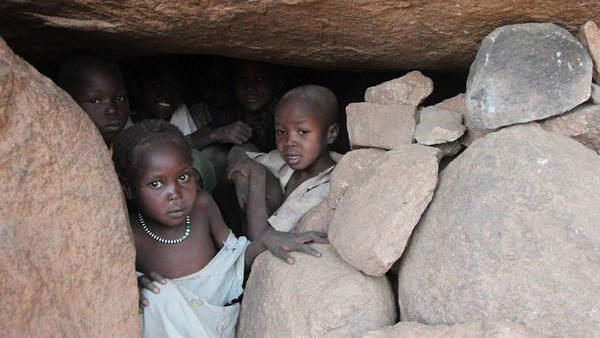 Besieged in Sudan’s Nuba Mountains: The Op-Ed columnist Nicholas D. Kristof witnesses a growing humanitarian crisis in Sudan, where starving families in the Nuba Mountains are hiding in caves to escape bombing by Sudanese warplanes.

IN THE NUBA MOUNTAINS, Sudan

We heard the whine of a bomber overhead, and the families I was interviewing suddenly scrambled to their feet.

Like starving people everywhere, they had seemed listless, their bodies conserving every ounce of energy to stay alive. “We’ve had nothing to eat but leaves from trees,” one young mother, Samira Zaka, told me. Her malnourished son was gnawing on a piece of wood.

Then the Antonov bomber buzzed above us, and she and her children rose from their torpor. They rushed into caves, and we all cowered deep in the rocks as the plane passed overhead. The Antonov went on to drop a bomb to the south; more on that in a moment.

This is a mass atrocity that has attracted little attention: a government starving its people, massacring them, raping them, and bombing them — all in hopes of crushing a rebel movement. Sudan has barred aid workers and journalists from the area, the Nuba Mountains of South Kordofan, in a largely successful effort to conceal savagery that has echoes of Darfur.

Like many others, I’ve denounced President Bashar al-Assad of Syria for his murderous repression, but the more than 7,000 estimated by human rights groups to have been killed under Assad is within the margin of error of estimates of the numbers of people killed by President Omar Hassan al-Bashir of Sudan.

I slipped into Sudan and the Nuba Mountains without a visa, via a rutted dirt track from South Sudan. My vehicle was covered with mud to make it less visible to bombers, which appeared overhead every couple of hours.

In any case, the Antonov bombers are so inaccurate that if they are actually aiming at you, you’re probably safe. The crews roll bombs out the cargo door, so that strikes have little military value but strike terror and keep people from farming. That’s one of the reasons starvation is stalking the land.

Tens of thousands of Nuba have been living in caves since June when the government began going house to house, killing families with rebel ties and driving out international aid groups.

On one rocky outcropping near the town of Tabanya, I spoke to villagers clustered outside what looked like the hole of an animal burrow. They told me that 16 people lived inside.

Nearby, Fatna Balal lives with her five children in an even tinier crevice in the rocks, one that even an animal might scorn. When I arrived, she was cooking her sorghum seeds that had been intended for the next planting. When they finished eating the seed, she said, her family would starve.

“In three months, if there is no food, they will die,” she said of her children.

Outside yet another cave, a frail, 12-year-old girl named Amani Abukarang said that she had eaten nothing at all that day — and it was early evening. “I’m always hungry,” she said.

The Sudanese armed forces are trying to seal off the last lifeline into the Nuba Mountains, the rutted dirt track from South Sudan that I took, to keep supplies from the rebels. The Sudanese Army periodically attacks it, or plants land mines to discourage traffic, but, so far, the rebels have always been able to reopen it.

In the village of Dar, I saw a burned-out government tank that the rebels said they had destroyed with a rocket-propelled grenade during one Sudanese push to take the road. The rebels, who are widely believed to get help from South Sudan, seemed well armed and confident.

“We will fight the Omar Bashir regime until we die,” said Brig. Gen. Nimeri Morat of the rebel army, the Sudan People’s Liberation Movement-North, surrounded by soldiers and trucks bristling with mounted machine guns. “Then our children will fight.”

I mentioned the Antonov that dropped its bombs as I was interviewing families in the caves. That evening, I saw the casualties from the bombing. Four women had been injured, the worst with a shrapnel wound that sliced open her chest and exposed her lungs.

Rebels laid her in the back of a pickup for a six-hour drive over rutted roads to an American surgeon, Dr. Tom Catena, who has worked heroically for months to save lives here. It seemed unlikely that the woman would survive. As the pickup jolted off, she uttered a piercing scream that continues to reverberate in my mind.

When a government devours its own people, there are no easy solutions. But in Sudan, as we decide how to confront growing starvation in the Nuba Mountains, we have some options that I’ll explore in my next column. The question is whether we have the political will, and I hope that the Nuba people’s courage and suffering will help rouse the international conscience.