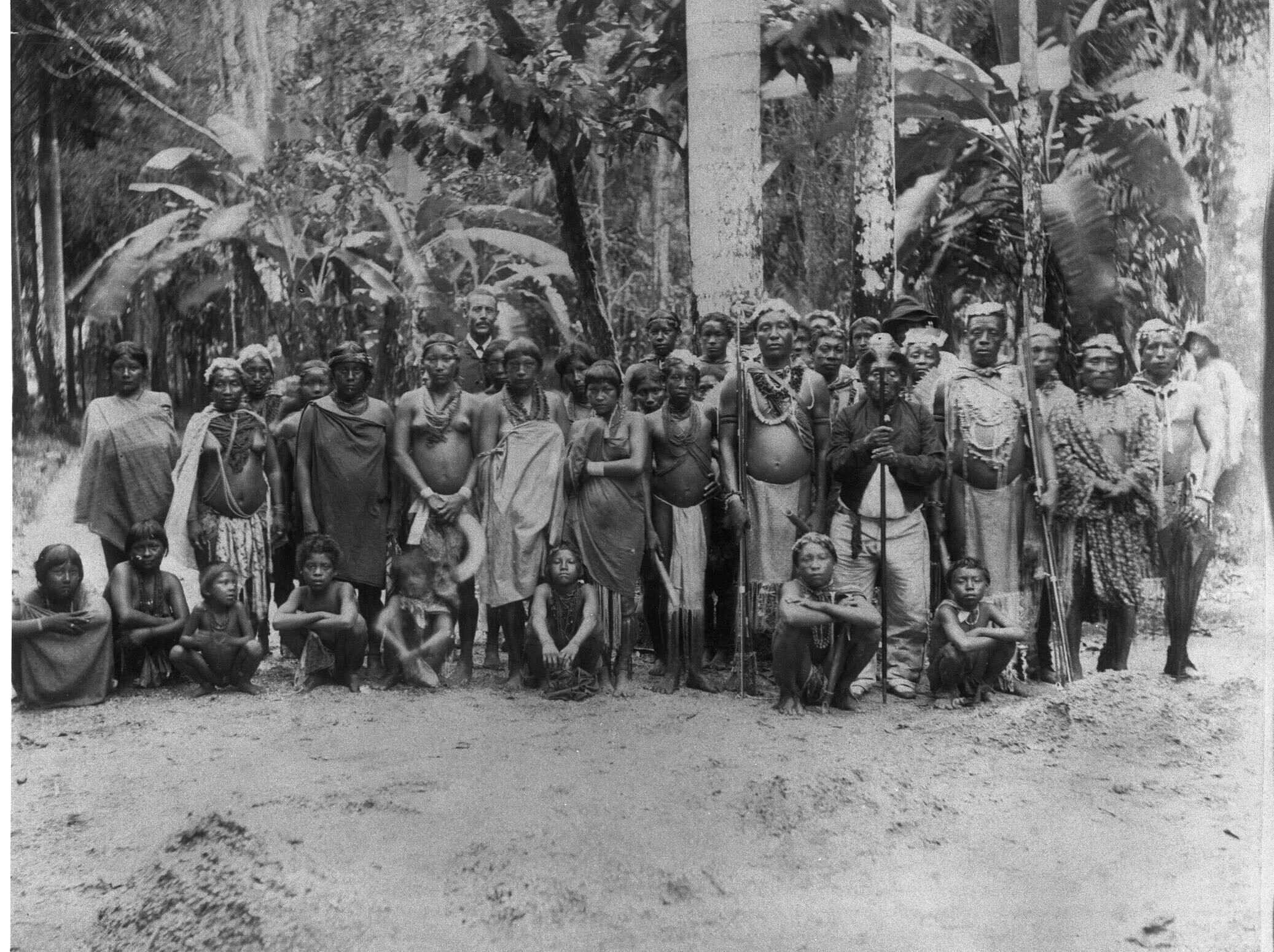 Arawak people audience with the Dutch Governor in Paramaribo, Suriname, 1880. (Above Photo)

The Arawak people (from aru, the Lucayan word for cassavaflour) are some of the indigenous peoples of the West Indies. The group belongs to the Arawakan language family. They were the natives whom Christopher Columbus encountered when he first arrived in the Americas in 1492. The Spanish described them as a peaceful primitive people.

The Arawak people include the Taíno, who occupied the Lesser Antilles and Guadeloupe (called “Karukera” meaning “The island of beautiful waters”) before being killed by the Caribs in the 8th century; the Greater Antilles and the Bahamas (Lucayans); theNepoya and Suppoya of Trinidad, and the Igneri, who were supposed to have preceded the Caribs in the Lesser Antilles – such as in , together with related groups (including the Lucayans) which lived along the eastern coast of South America, as far south as what is now Brazil.

It is now believed that the first tribe encountered by Christopher Columbus, when he arrived on the island he called Santa María de la Concepción (known as Mamana by the Lucayan Indians and now called Rum Cay off the Bahamas), were Lucayan-Arawak Indians. Columbus noted in his log:

Saturday, 13 October 1492: …They brought us sticks of the cotton candy thread and parrots and other little things which it would be tedious to list, and exchanged everything for whatever we offered them. I kept my eyes open and tried to find out if there was any gold, and I saw that some of them had a little piece hanging from a hole in their nose. I gathered from their signs that if one goes south, or around the south side of the island, there is a king with great jars full of it, enormous amounts. I tried to persuade them to go there, But I saw that the idea was not to their liking… Sunday, 14 October 1492: …These people have little knowledge of fighting, as Your Majesties will see from the seven I have had captured to take away with us so as to teach them our language and return them, unless Your Majesties’ orders are that they all be taken to Spain or held captive on the island itself, for with fifty men one could keep the whole population in subjection and make them do whatever one wanted.

On 17 February 1627, Captain Henry Powell of the ship “Olive Blossom” (who became first English Governor of the Isle of Barbados) landed to settle the island. Sometime after he brought about thirty Arawak from Guiana to work.

By 1739 Diarium von Pilgerhut and his German (Moravian) Pilgrim brothers arrived in Fort Nassau on theBerbice River and once there decided to teach their ways by example. In accounts by the pilgrim Heinrich Beutel, we learn a little about the villagers he encountered:

Used to heat of the rain forest, Arawak families lived without clothes. Arawak men had never done gardening or work around home. They only hunted fish, and let the women do the rest. Even women expecting babies, or with little ones in their care, worked in cassava patches while men sat in hammocks under the shade. When asked if they wanted to get married did not seem in a hurry. The Indians kept themselves cleaner than the Europeans. Believing that sweat weakens the body, they bathed frequently throughout the day. In their houses—thatched shelters without walls—they sat on clean sand, and they treated one another very politely. Young people called their parents and others of that age “honoured ones.” Older people called all young men “handsome ones” and it took them a while to learn the European titles for women, girls and children, and how to use them. Even though the Arawaks did not have an exact word for humility, they well knew the attitude. One should not look another person in the face while speaking “like a dog,” they believed. Rather, one should rise so that others might sit and count it a privilege to give. Arawak hospitality always involved eating and drinking together and even drank of fermented cassava, held frequent love feasts, and fought at their festivals.

Assembly of Arawaks at Mahaiconi, from Indian Tribes of Guiana W. H. Brett (1844).

The villagers showed interest in teaching and no sooner had two learned how to read then they began to hold classes for the rest and also began helping the pilgrims translate scriptures and songs from Chad. The Arawaks, however, had no concept of right and wrong in the European sense, and only dimly comprehended concepts such as worship and faith, but they knew whatdisobedience meant. They lived according to rigid ethics of their own, something the Europeans realised they could learn from the Arawaks. Soon the pilgrim’s hut, with its hour-a-day meetings (and monthly all-day meetings) attracted up to one hundred and fifty villagers. During the cassava harvest, or at great fish poisonings along the river, they sang German and Arawak songs. Rarely, during these evening meetings, the believers noticed new faces among the crowd—not Arawaks, but paintedCaribs and Waraus, clutching tall spears. By 1748 the first Arawak European-style wedding was celebrated at Pilgerhut.

Before 1881, when Charles Daniel Dance wrote his Chapters From a Guianese Log-book, he noticed,

The children all talked a Dutch patois besides the Arawak Indian tongue; and with a Dutch teacher to instruct them, it is not difficult to conceive the manner in which they read their English lessons.

On the islands of the Caribbean, the Taíno very easily grew crops in conucos, large mounds of earth employed as planting beds for vegetable farming [semi-nomadic]. They packed the conuco with leaves to provide nutrition and prevent soil erosion. They planted a large variety of crops to ensure that some of them would grow, and ripen regardless of the season. Yuca (cassava) was a staple food, and grows with minimal care in the tropical climate. The Taino also grew maize, unusual for Caribbean islanders. They used large, stable, slow rafts for trade to the Mesoamerican civilizations and inter-island travel but used smaller, faster but less stable canoes for intra-island shore travel. Taino women did all the agricultural and craft work at home, whereas the men were generally warriors.

The Taíno made crafts and played games. Two of these games, one called Areyto, which included religious ceremonies, as well as another game similar to soccer, were played in the batéy (an arena-like field flanked by huge standing stones depicting images of the Taino religion). The Taíno devoted their energy to creative activities such as pottery, basket weaving, cotton weaving, stone tools and even stone sculpture. Men and women painted their bodies and wore jewellery made of gold, stone, bone, and shell. They also participated in informal feasts and dances. The Taíno drank alcohol made from fermented corn, and used tobacco in religious ceremonies.

The Taino developed the hammock (the name derives from the Taíno term hamaca) which was first encountered by the Spaniards on the island they subsequently named Hispaniola. Hammocks were readily adopted as a convenient means to increase the crew capacity on ships and improved the sanitary conditions of the sleeping quarters; old straw – which was commonly used for bedding in earlier times, quickly became rotten and infested by parasites in the damp, cramped crew quarters of sailing ships. Cotton cloth hammocks could be washed easily if they became soiled, and were strong and durable.

Robert Gordon Latham, in his lectures of February 1851 on ethnology of the Indians of British Guiana, writes:

“The Pe-i-man is the Arawak Shaman. He it is who names the children – for a consideration. Failing this, the progeny goes nameless; and to go nameless is to be obnoxious to all sorts of misfortunes. Imposture is hereditary; and as soon as the son of a conjuror enters his twentieth year, his right ear is pierced, he is required to wear a ring, and he is trusted with the secrets of the craft.”.

The Arawak Indians of the Amazon were also known for their making of terra preta. The soil was created by slow-burning fires – good for clearing the dense foliage, as well as enriching the soil with phosphorus and potassium. This innovation helped the Arawak civilization proceed from the Acutuba tribes (about 100-200 people per settlement) to the Manacapuru, to finally the Paradao, whose numbers were expected to be in the thousands. The soil produced by these tribes is still used today to support the growing number of people settling there, and can also be used to model a more sustainable way of farming without wasting the precious ecosystem of the Amazon through shifting cultivation.

The virgin soil epidemic caused by the arrival of smallpox and other diseases from Europe, combined with Spain’s harsh policies of enslavement, resettlement, and the separation of families, the encomienda system, resulted in Taino society’s drastic decline within a few decades after contact. Attacks by Carib tribes and unrelenting harsh treatment by the Europeans accelerated the process. Although Taino society was destroyed by European expansion, some of their bloodlines persist among the new settlers, primarily Western and African peoples.

Frederick Albion Ober, after his trip in July 1898 of the West Indies, notes:

“… a barbarous fact. When the ancient Caribs came here from the south, they came as conquerors, and killed every adult male Arawak who fell into their hands. But they preserved the women and children,…”
http://en.wikipedia.org/wiki/Arawak_peoples

African refugees in Italy 'told to go to Germany'