While the women hunt, the men look after the babies – even letting them suck their nipples. Joanna Moorhead asks anthropologist Barry Hewlett why the Aka are such unusual parents

It’s a question that has united Aristotle, Darwin and my three-year-old in puzzlement: what exactly are male nipples for ? This week, the charity Fathers Direct came up with an answer, courtesy of some research it unearthed about a nomadic tribe of African hunter-gatherers. The answer, it seems, is the one my three-year-old (and Darwin, to be fair) suspected all along: male nipples are there as a stand-in for when mum isn’t around and there’s a squawking bambino in dire need of something to suck.
And, when you think about it, why ever not? Surely a male nipple, deficient though it is in terms of sustenance, gives a more pleasant sucking sensation than, say, a dummy.
That’s certainly how it seemed to Professor Barry Hewlett, an American anthropologist who was the first person to spot male breastfeeding among the Aka Pygmy people of central Africa (total population around 20,000) after he decided to live alongside them in order to study their way of life more closely. By the time he noticed that babies were sometimes being suckled by their fathers, it wasn’t as stunning a revelation, however, as it might have been had he spotted it going on in the breastfeeding room at Mothercare in Manchester. 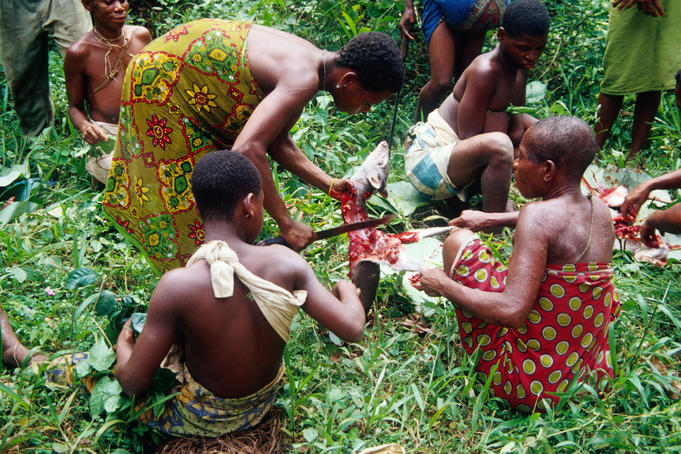 Because by then Hewlett had realised that, when it comes to gender egalitarian parenting, the Aka – who call themselves the people of the forest – beat anyone else he’d ever studied hands down. According to the data he began collecting more than two decades ago, Aka fathers are within reach of their infants 47% of the time – that’s apparently more than fathers in any other cultural group on the planet, which is why Fathers Direct has decided to dub the Aka “the best dads in the world”.
What’s fascinating about the Aka is that male and female roles are virtually interchangeable. While the women hunt, the men mind the children; while the men cook, the women decide where to set up the next camp. And vice versa: and it’s in this vice versa, says Hewlett, that the really important message lies. “There is a sexual division of labour in the Aka community – women, for example, are the primary caregivers,” he says. “But, and this is crucial, there’s a level of flexibility that’s virtually unknown in our society. Aka fathers will slip into roles usually occupied by mothers without a second thought and without, more importantly, any loss of status – there’s no stigma involved in the different jobs.”

One especially riveting facet of Aka life is that women are not only just as likely as their men to hunt, but are even sometimes more proficient as hunters. Hitherto, it has usually been assumed that, because of women’s role as gestators and carers of the young, hunting was historically a universally male preserve: but in one study Hewlett found a woman who hunted through the eighth month of her pregnancy and was back at work with her nets and her spears just a month after giving birth. Other mothers went hunting with their newborns strapped to their sides, despite the fact that their prey, the duiker (a type of antelope), can be a dangerous beast.
If it all sounds like a feminist paradise there is, alas, a sting in the tale: Hewlett found that, while tasks and decision-making were largely shared activities, there is an Aka glass ceiling. Top jobs in the tribe invariably go to men: the kombeti (leader), the tuma (elephant hunter) and the nganga (top healer) in the community he has studied are all male. But that doesn’t detract, he says, from their important contribution as co-carers in the parenting sphere: and nor, either, does it reduce the impact of the message he believes the Aka people have for western couples struggling to find a balance between the demands of employment, home-making, self- fulfilment and raising kids.
“The point about the Aka,” says Hewlett, “is that the active role the fathers have is simply one facet of their entire approach to life, and it’s that approach as much as anything that we can learn from. One thing that’s crucial in the raising of the young is the importance placed on physical closeness: at around three months, a baby is in almost constant physical contact with either one of her parents or with another person. There’s no such thing as a cot in an Aka camp because it’s unheard of for a couple to ever leave their baby lying unattended – babies are held all the time.” Aka fathers, apparently, aren’t averse even to heading down to their equivalent of the pub with a child attached to their chest (or even their nipple); the Aka tipple, palm wine, is often enjoyed by a group of men with their infants in their arms.
It’s all a far cry from the west and, says Hewlett, the first thing fathers here could think about is the lack of time and physical contact they often have with their young kids. “There’s a big sense in our society that dads can’t always be around and that you have to give up a lot of time with your child but that you can put that right by having quality time with them instead,” he says. “But after living with the Aka, I’ve begun to doubt the wisdom of that line. It seems to me that what fathers need is a lot more time with their children, and they need to hold them close a lot more than they do at the moment. There are lots of positive contributions fathers can make to bringing up their children, but we shouldn’t underestimate the importance of touch and cuddles.”
This is one of the most important lessons the Aka brought to Hewlett’s own experience of parenting, he says: he’s a father of seven kids, aged between 13 and 22, and he has moulded his life and career so he’s been able to be around a lot as they were growing up. He says that his studies of the Aka have also made him a more trusting and sharing father (two qualities the Aka have in abundance, apparently).
Another lesson the Aka have for us – and this is for all of us, mothers as well as fathers – is about how precious children are, and how lucky we are to have them in our lives. If it sounds a bit schmaltzy well, that’s exactly why we need to hear it: the fact is, says Hewlett, that we’ve strayed into believing that our kids are a burden rather than a blessing and that’s something the Aka never do. “To the Aka, your children are the very value of your life. The idea of a child as a burden would be incomprehensible there … children are the energy, the life force of the community.” A saying from another tribe he’s studied, the Fulani, sums the sentiment up: they say that you’re lucky if you’ve got someone who will shit on you.
But back to that male breastfeeding: Jack O’Sullivan of Fathers Direct says he was invited on chat show after chat show on Monday in the wake of the report going public, and faced a mixture of horror, consternation and support. “Some fathers phoned in to say they’d let their child suck their nipples – often it had just happened when the baby was lying on their chest in bed,” he says. But some people were disgusted: the words “child abuse” came up more than once, which points up interesting cultural differences when you think that, to Aka folk, much of the way we raise our kids would count as child abuse to them (babies being left to sleep alone in a different room from their parents, for example).
For O’Sullivan, what is sad is that the negativity to the Aka revelation points up the continuing awkwardness around intimacy between fathers and their infants: while mother-child intimacy is very public, and celebrated, father-child intimacy is still shied away from and worried over, despite an increasing body of evidence showing that, given the chance, fathers can be every bit as respondent to their infants as mothers in terms of reading their signals and communicating with them. In a nutshell, says O’Sullivan, men are scared of intimacy with babies and small children – and it could be that looking anew at that fear, with reference to the Aka experience, could be a useful and liberating male experience.