A Swansea City fan has been arrested over allegations of racial abuse towards a Norwich player at the Liberty Stadium, the club has confirmed.

Norwich manager Chris Hughton said a racial gesture had been made towards defender Sebastien Bassong during Saturday’s Premier League match.
Police confirmed a 23-year-old Swansea man had been arrested on suspicion of a racially aggravated public order offence.
Swansea City lost the match 4-3.
The incident allegedly happened after Robert Snodgrass scored the visitors’ fourth goal in the 77th minute.
Cameroon international Bassong indicated to referee Howard Webb that he had been the victim of a racist gesture as he celebrated the goal with his teammates.
Webb referred the complaint to the fourth official and a male fan was then arrested.
“There was an incident after Norwich’s fourth goal. Sebastien Bassong made the referee aware there was a racist gesture towards him from a Swansea City fan,” said a Swansea spokesperson. 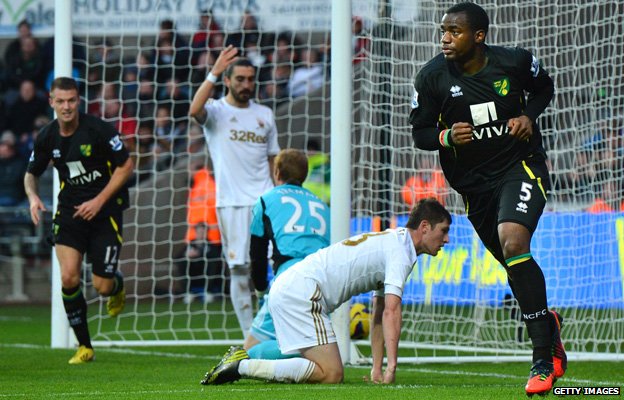 “Within 10 minutes of the report, the stewards had got hold of the TV footage, replayed it, identified the alleged person in question and within that period, he was arrested for a racially aggravated public order offence.
“The matter is with the police, but from the club’s point of view, we abhor racism and we have worked hard over the years to make this a family club.
“We will look into it and a further statement will follow in due course.”
Speaking to reporters after the game, Norwich manager Chris Hughton said: “What I’ve been made aware of is that there was a gesture made towards Bassong.
“I have spoken to Seb and I know what the situation is, but Swansea dealt with it in the correct manner. It’s now in the hands of the authorities.”
Swansea manager Michael Laudrup said he had been unaware of the incident.
“I was concentrating on the game so I don’t know anything,” he said.
“I don’t know anything about it but it’s a thing we don’t want in a game, not here and not anywhere.”
A police spokesperson said: “South Wales Police can confirm that a 23 year old Swansea man was arrested during the Swansea v Norwich game at the Liberty Stadium today for a racially aggravated public order offence.
“He remains in police custody.”