The Trustees of the British Museum

A bird’s-eye view of London etched by Wenceslaus Hollar in 1647.

LONDON — The portrait of Elizabethan England brilliantly painted through art and literature by Jonathan Bate and Dora Thornton at the British Museum is the most innovative undertaking in the museum arena yet seen in the 21st century.

Highlighting the living culture of the realm with paintings and artifacts, Mr. Bate, a Shakespeare scholar, and Ms. Thornton, curator of Renaissance collections at the British Museum, provide the real-life backdrop to Shakespeare’s plays in the exhibition, titled “Shakespeare: Staging the World.” Thanks to collaboration with the Royal Shakespeare Company, passages read out by actors can also be heard.

The main setting for the action is London, although the exhibition catalog the authors underline the importance that Shakespeare, born in Stratford-upon-Avon, attached to his home county, Warwickshire.

From the outset, a bird’s-eye view of the city, etched by Wenceslaus Hollar in 1647 and printed in Amsterdam, gives an idea of what London looked like before it was wiped out by the 1666 fire. The old St. Paul’s Cathedral, which was destroyed in the catastrophe, rises in the distance above a sea of densely packed houses. The London Bridge that so impressed visitors, lined with buildings leaving a passage through the middle, is also there. Michael van Meer, a traveler from Hamburg, drew it in pen and ink heightened with wash in a “Friendship Album.” 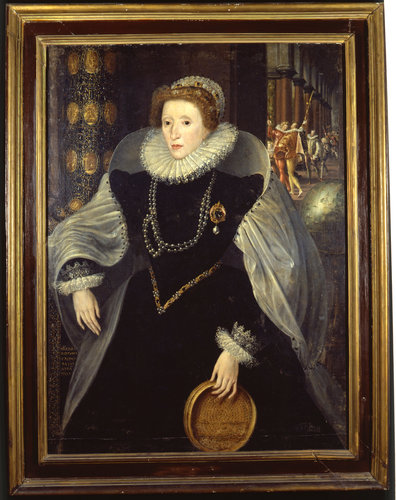 A portrait of Queen Elizabeth I with a sieve, dated 1583 and attributed to Quentin Metsys the Younger.

What leaps to the eye is the overwhelming predominance of foreign contributions to the visual arts that adorned palatial residences.

Marcus Gheerhaerts the Younger made an impressive portrait of Queen Elizabeth I, painted around 1592, when Shakespeare was beginning to catch the attention of the English court. The painter’s father, Marcus Gheerhaerts the Elder, had fled his native Bruges to escape persecution inflicted upon Protestants by the Spanish occupiers in Flanders.

Another striking portrait of the queen, dated 1583, dreamily clutching a sieve, is also the work of a Flemish artist, probably Quentin Matsys the Younger.

The miniaturist favored by the establishment was Isaac Oliver, who was born in France. This accounts for the French flavor of the likeness of the aristocratic poet and philosopher Edward Herbert, while the landscape in which he is reclining betrays Flemish influence. 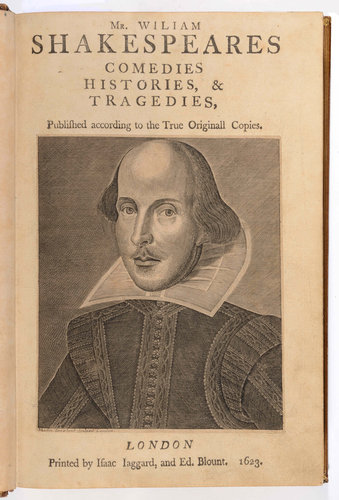 An engraving of William Shakespeare by Martin Droeshout.

Foreigners took the lead in all the fine arts. This included armor, one of the most original forms of Renaissance sculpture, even though it is rarely characterized as such by art historians.

Henry Wriothesley, third earl of Southampton, wore a suit of armor ascribed to France. Southampton had himself portrayed wearing the collar of the armor. The cuirass is laid on the floor, and the plumed helmet is set on a table draped in gold-brocaded velvet, like some precious work of art.

The portrait is typical of what the authors of the exhibition book call “a militarized society in which Shakespeare was a war poet.” Fighting raged in the Netherlands during the 1580s, war with Spain went on through the 1590s, and Ireland was putting up strong resistance against English domination.

Violence erupted within English society, as well. “‘Romeo and Juliet’ is Shakespeare’s tragedy of Elizabethan knife crime,” the authors say in their book. Actors and playwrights, among others, were often involved in street fights. Ben Jonson, Shakespeare’s friend and rival, killed a man in one of those rough encounters. Christopher Marlowe, then a famous playwright, was stabbed in a London scuffle.

At times, collective violence exploded, fanned by xenophobic hysteria. On May Day 1617, a mob of about 1,000 youngsters, mostly poor laborers and apprentices, gathered near St. Paul’s and rampaged through the districts where foreign communities lived and worked. They ransacked small businesses, demanding the deportation of foreigners.

The worst violence was inspired by religious fanaticism. Public executions, preceded by outbursts of wildly sadistic torture, were watched by crowds as a form of entertainment. A drawing in pen and brown ink by Claes Visscher, which shows the execution of eight of the Gunpowder Plotters on Jan. 30 and 31, 1606, gives a graphic idea of the atrocities. Shakespeare writes about torture and public executions as a spectacle. The rack on which the bodies of prisoners were distended to obtain confessions is mentioned in “The Merchant of Venice” and “King Lear.”

The portrait that Mr. Bate and Ms. Thornton paint of English society in the age of Shakespeare presents some enduring features. The desire to be seen at events? Consider what Thomas Platter, a Swiss tourist from Basel who visited Shakespeare’s theater, The Globe, in 1599, had to say about admission prices. The traveler notes in conclusion that if a spectator “desires to sit in the most comfortable seats, which are cushioned, where he not only sees everything well, but can also be seen,” the rate is triple that of standing room.

The pub culture? “There are a great many inns, taverns and beer gardens scattered about the city,” the Swiss tourist noted. “What is particularly curious is that the women, as the men, in fact more often than they, will frequent the taverns and ale-houses for enjoyment.”

Blood sports involving cruelty to animals were widespread. Bear baiting was advertised on posters as were plays. The skull of a brown bear was excavated from the site of Shakespeare’s theater in 1989. The teeth had been ground down to prevent the female bear from damaging too seriously the mastiffs used to taunt her. These fighting bears were given names and some were famous. Sackerson, kept at “The Paris Garden,” is mentioned in “The Merry Wives of Windsor.”

Then as now, prostitution was a concern. “Great swarms of these women haunt the town in the taverns and playhouses,” Platter warned.

Pickpockets and con men were another problem. A highly regarded astrologer and physician, Simon Forman, attended a performance of “A Winter’s Tale” at the Globe in 1611. Commenting on the trickster Autolycus, Forman advises, “Beware of trusting feigned beggars or fawning fellouse.”

A blatant parallel to the present is the English attitude to foreigners from the Muslim world. Princely envoys, such as those sent by the sultan of Morocco, were received in great pomp. The sultan was bent on recovering Andalusia, lost in 1492 to the Spanish, resulting in the expulsion of Muslims and Jews. The sultan sent an ambassador to the English court with a party of 16 men to explore the possibility of joint military action against Spain. The party landed at Dover in August 1600 and was granted an audience at Nonsuch Palace. Talks were held in Spanish through an interpreter, named Lewis Lewkenor. Presumably of Spanish Jewish descent, he would have been a native speaker of the 15th-century Castilian language retained by the Jewish exiles in Arab lands.

During the six months that the Moroccans spent in London, the ambassador had himself portrayed by an anonymous artist, who did his best to paint an image of “The Noble Moor.”

The Moroccan stands in North African white garb. He has a fancy sword with a would-be exotic hilt, improbably attached to his side in the European fashion — but with nothing to hold it in place. An inscription in Roman capitals comically identifies the sitter in Latin.

The reception given to sub-Saharan Africans who reached London as victims of the slave trade was not so welcoming. Three proclamations ordering their deportation as illegal immigrants were issued between 1596 and 1601. The 1601 proclamation notes “the great number of Negroes and Blackamoors” that had “crepte into this realm” as aliens kicked out of Spain.

Commenting on the significance of the Moor Othello portrayed by Shakespeare, the authors of the exhibition book write that Venice had been chosen as “a setting for plays that explore very English anxieties about shifting racial and religious identity and allegiance.” Who said that history does not repeat itself?

This stunning portrayal of Shakespearean England, the first of its kind, has laid the foundations for a new artistic and literary genre. It may inspire imitations but it will not easily be surpassed.