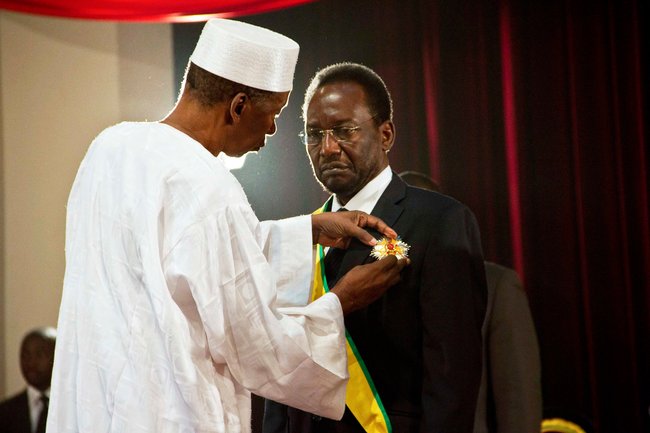 Dioncounda Traore, right, was sworn in as Mali’s interim president in the capital, Bamako, on Thursday.

BAMAKO, Mali — Twenty-two days after a military coup ended more than two decades of democratic rule in Mali, the leader of the country’s National Assembly was sworn in as interim president on Thursday.

The official, Dioncounda Traoré, a 70-year-old labor union activist who had been jailed in Mali’s earlier struggle against dictatorship, will lead a temporary government that aims to organize new elections within 40 days and guide the country back to constitutional rule.

But he must also face the challenge of reuniting a country torn in two. During the chaos of the coup, Tuareg militiamen in the north staged an opportunistic uprising, seizing strategic towns and declaring an independent nation.

“Mali has never experienced such difficult times,” Mr. Traoré said in remarks after he was sworn in. “Its very existence as a nation is at stake.”

He called upon the Tuareg rebels to leave the areas they occupy immediately or face “total and relentless war.” Ecowas, the West African trade bloc that pressured the coup leaders to relinquish power by closing borders with Mali and freezing the nation’s funds in the regional bank, has also been drawing up plans to help oust the rebellion in the north.

The coup was a serious setback for democracy in Africa. The country was little more than a month away from holding elections to replace its president, Amadou Toumani Touré, who had adhered to the nation’s Constitution by agreeing to step down after his second term in office.

Then, in a surprise derailment of the democratic process, a group of junior officers deposed him, contending that he had been too weak in confronting the uprising in the north. In the ensuing confusion, however, the northern rebels rapidly advanced, taking control of Timbuktu and declaring their own country, Azawad.

The leader of the junta, an American-trained army captain, was reduced to begging for foreign help to defeat the rebels. He also faced fuel shortages because of the sanctions. Late last Friday, the junta agreed to step down in return for amnesty.

The speedy, diplomatic resolution of the coup stood in stark contrast to the case of Ivory Coast, where months of international condemnation and sanctions failed to dislodge the nation’s strongman, Laurent Gbagbo, after he lost an election.

In that case, it took an onslaught by rival forces and airstrikes by the United Nationsand France before Mr. Gbagbo surrendered last year. But here in Mali, the crisis was resolved very shortly after sanctions were imposed.

Still, the situation in northern Mali continues to be grave. The United Nations commissioner for human rights, Navi Pillay, said Thursday that steps must be taken to protect civilians there.

“Reports from the north of the country suggest that civilians have been killed, robbed, raped and forced to flee,” Ms. Pillay said. “It is difficult at this point to be sure of the scale of the human rights violations taking place, but in addition to preying on individuals, a variety of different rebel groups have been accused of looting private and public property, including hospitals and health care facilities.”