January 15, 2013, 7:42 pm
By JADA SMITH
Science and religion went hand-in-hand on Tuesday as leaders from both worlds gathered in front of the White House to protest what they cast as government inaction on climate change. 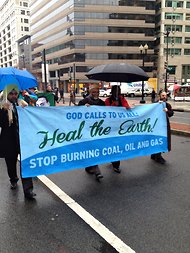 Jada SmithDemonstrators headed toward Lafayette Square, across from the White House, on Tuesday in Washington to press for action on climate change.

“This gathering today is to affirm that God has gifted us in many ways, one of which is a good mind to figure out how things are going,” said Bob Coleman, the chief programming minister of the Riverside Church in New York City. “It’s not so much an embrace of science, but an acknowledgement that science is a part of us, it’s a part of our own living every day.”
With record-breaking global temperatures in 2012, severe droughts and several storms and hurricanes on the East Coast, some members of the American clergy are saying that human decisions that contribute to the extreme weather associated with climate change can no longer be left in the hands of politicians.
Promoting an awareness of climate change and the role of humans as stewards of the earth has become a popular theme among progressive religious congregations. Even the climate skeptics in their ranks, some said, are starting to realize that something strange is going on.
A “pray-in” at New York Avenue Presbyterian Church and a subsequent march to the White House, which was blocked by bleachers as workers swarmed about setting up for the inaugural parade, was timed for the Rev. Dr. Martin Luther King Jr.’s birthday. The civil rights leader’s face was on banners, and his name was evoked repeatedly throughout the event.
Some participants described environmental activism as an extension of the work that King did to advance civil rights and economic justice, especially given the correlation between poverty and pollution.
“It is the poor of our world now who are suffering now from global warming — in Asia, Africa and South America, ” said Johari Abdul-Malik, the imam of a mosque in Falls Church, Va. “We have to go beyond personal recycling and reducing and reusing of plastic and paper — and the recycling of the same old politicians and policies.”
From the devastation wrought by Hurricane Katrina in the Lower Ninth Ward of New Orleans to a proposal to lay the proposed Keystone XL pipeline through some American Indian communities, some religious leaders have begun to see the issue of weather extremes, fossil fuel emissions and threats to habitats as a moral one.
After prayers and religious readings from Jewish, Muslim, Christian, Buddhist, Hindu and Sikh leaders and a few American Indian chants, the names and ages of the victims of Hurricane Sandy were read aloud, with the crowd responding “present” to acknowledge “the spiritual presence of the deceased.”
For the Rev. Lennox Yearwood Jr., the president of the civil and human rights group Hip Hop Caucus — one of the organizations behind the popular 2004 “Vote or Die” campaign — the protest and pray-in were an opportunity to highlight the increasing involvement of minority institutions in the environmental movement.
“People say, well, it’s just a bunch of Birkenstock-wearing, environmentalist, tree-hugging rich white folk, but that’s really not the case,” Mr. Yearwood said.  “A lot of times there are other things going on in the communities, such as gun violence in Chicago, which makes it hard to focus on this issue. But now we’re seeing church involvement – the black churches – and urban communities getting more engaged. There really is a transition going on in the communities and young people asking what we can do to change our environment.”
The next step, he says, is to bring even more groups into the fold.
“Dr. King, clearly he was about fighting against injustice, but he recognized that we cannot fight injustice as a segregated progressive movement,” Mr. Yearwood said. “We could not do this movement siloed.”
“In other words, this movement cannot be just all white, or the gun violence movement in the ‘hood just all black, or the immigration issue just all brown,” he said. King “would say that we need to come together because this is our planet, and if we lose this, then all the other issues won’t matter.”