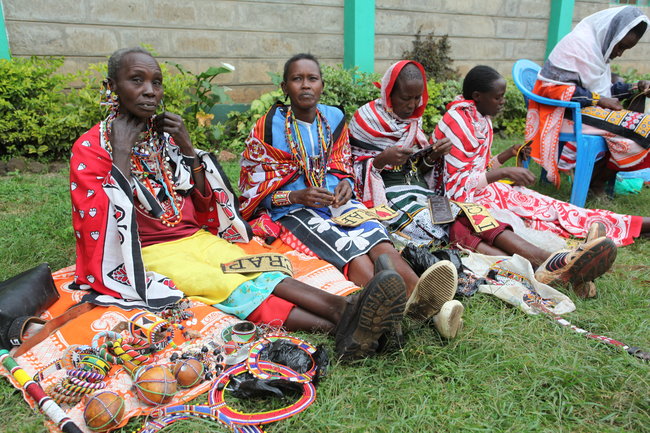 GILGIL, KENYA — It was a song of welcome from women turning cast-off men’s shirts into handbag linings. The words rang like a hymn across the Ngong hills, echoing through the scrubby town, as small children clung to their mothers and joined in the chorus.

Among the bursts of laughter were two words that seemed unlikely to have come out of a local community in Africa: “Stella!” “Vivienne!”

The poorest of the poor — Masai women escaping polygamous menfolk or artisans from Nairobi’s chaotic slums — are making handbags for Western designers to sell to the wealthy. And that provides food for thought as yet another round of international fashion shows begins this week in New York.

Stella McCartney, Vivienne Westwood, Ilaria Venturini Fendi and the Australian Sass & Bide are just four fashion companies engaged in making products in a way that irrigates arid lives. They may also be reflecting a new vision of luxury that involves human hands, respect for the environment and decency in employment.

At the heart of the African fashion collectives is Simone Cipriani, an Italian from his country’s leather industry who has made it a mission for the United Nations to develop an Ethical Fashion Initiative at the International Trade Center in Geneva. (The I.T.C. is a joint body of the United Nations and the World Trade Organization.)

“I am passionate, I am Italian, I roar like a lion,”said Mr. Cipriani as he sorted out a business problem on his cell phone, while driving up the Great Rift Valley pass with its galloping zebras and grazing rhinos. 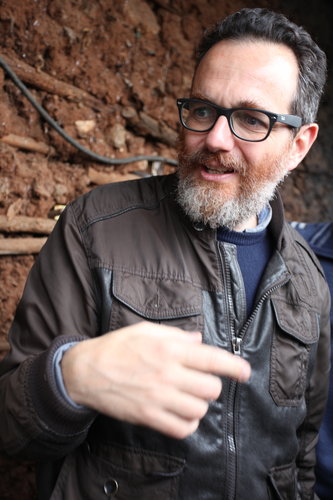 Simone Cipriani, who runs the Ethical  Fashion Initiative, spends much of his  time  working with marginalized artisans.

The essence of the I.T.C. work is summed up in a single phrase: “Not Charity. Just Work.”

Mr. Cipriani first saw the potential of Africa as a fashion provider in Ethiopia 15 years ago, when his enthusiasm persuaded the Geneva-based organization to finance a business that connected marginalized communities with the fashion chain.

“We created a business model — a system to organize employment and therefore give dignity to people,” Mr. Cipriani said. “Another kind of fashion is possible, bringing social and environmental sensibility.”

At the I.T.C. hub for fashion design and its creation, set in the GoDown arty area in Nairobi, the fruit of the work is in the designer purses, including sustainable bags made for Ms. Fendi’s Carmina Campus line. The illustrious Italian company with her family name has even sent a video from its bag experts explaining how to develop technique to a luxury level.

“It’s great to think that my fashion background is benefiting these people who have the possibility to become future, self-sustained micro-entrepreneurs, which is one of the program’s goals,” Ms. Fendi said. Having worked independently in Cameroon five years ago, she joined up with the I.T.C. in 2009, and now goes to Kenya at least once a season.

Mr. Cipriani examines bags made with discarded army blankets and mosquito nets and then hugs everyone in sight. That includes Jane Mary Kabura Cheg, who is in charge of the 70 people working at the hub, stitching the shapes, pressing flat worn shirts and decorating the bags; and the British designer/organizer Jeremy Brown. He not only serves as liaison for the fashion companies but also creates lower-priced pieces for mass retailers.

Working to fair labor standards, the Kenyan artisans are paid the equivalent of $5 to $11 a day, depending on the skills. An ethical fashion tote on the Westwood Web site costs £100, or $160.

Mr. Cipriani has a dream: that Hermès will one day use the hub’s 100 per cent natural leather tanned by tree bark. Meanwhile, he is proud to have engaged high fashion names, such as Vivienne Westwood. The British designer posed for pictures in the Kibera slum, where the gilded orbs that are her company logo are fashioned from metal scraps and recycled brass.

That was a life-changer for Steven Adawo Kine, a determined and energetic welder. With money made by melting metal on a basic forge in a slum hovel, he has become a registered jeweler, selling metal and bone accessories from a cabin on the outskirts of Kibera.

“The economy of the slums is in a large part recycling,” Ms. Westwood said. “Everything is re-used or made into something else, like toys carved out of flip-flop shoe soles or jewelry from animal bones.

“My bags remind me of my time in Nairobi,” she continued, recalling “a kaleidoscope of materials and surfaces” and of drawing inspiration from the lush gardens of the wealthy, from columns of people walking to work along dusty roads, kids’ school uniforms from the British colonial era, fertile landscapes and an elephant plodding beneath puffy clouds.

Masai women, in their intensely colored and decorated robes, work in the hub, using embroidery skills on the 7,000 Westwood bags produced annually.

Lisa Barratt, who is overall project manager of the Kenyan I.T.C. operation, described the impact of the orders from the Ethical Fashion Initiative as “lasting and empowering.” Since there is traditionally no value placed in their own communities on women’s skills, learned from childhood, when the work brings in money it helps whole families out of poverty. Ms Barratt says that I.T.C. impact assessment shows that one person’s income supports at least 6 to 7 family members, often enabling children to have a first opportunity of education.

Since the Stella McCartney brand has always been based on strong values — for example, no animal has ever been slaughtered for her bags or shoes — the designer has been drawn to the cooperative.

“Working with human hands has always been the goal in our house,” says Ms. McCartney, who dreams of bringing her four children to Kenya to see the wildlife.

“No matter where the touch is from, I cherish the thought that people are in contact with our product and that soul and love are in each quality piece,” the designer said. “To have the work in Kenya is important — not only to support women and give them a much-needed income, but also to encourage this line of industry for small communities.”

Ms. McCartney described the experience as “a two-way street — everyone feels valid.” She also praised the support from her parent luxury company PPR where she is involved in its Foundation for Women’s Dignity and Rights.

New to the bag makers are the Australian designers Sarah-Jane Clarke (Sass) and Heidi Middleton (Bide), who are able to entice Southern Hemisphere customers through the Western winter.

“The social responsibility element is the strongest attraction to this project,” Ms. Middleton said. “I have always believed it is essential that compassion, generosity of spirit and business should mix. It is what we have built our business on and what I directly correlate with our success. It seems so obvious: by giving tactically, emotionally, financially or spiritually, the receiver benefits, the giver feels happier, lighter, more positive and the whole process initiates a butterfly effect of goodness.”

Behind the I.T.C. project lies a question: To go for quality or quantity?

Mr. Cipriani says that building highly developed skills is valuable and lasting. Yet he is also aware that numbers count. At a collective in Dagoretti, in Nairobi’s western suburbs, women are crocheting ink-blue purses destined for a low-price, fast-fashion store. And the executive is courting big retailers like Macy’s in New York and Top Shop in London.

By creating goods that the international world is prepared to buy — not just “pity purchasing” for tourists — Mr. Cipriani might just reach his goal of “fair and responsible” growth for bigger brands and a wider audience.

A previous version of this article misspelled the name of the welder who forged orbs for Vivienne Westwood. He is Steven Adawo Kine, not Steven Adao.