Calendars for the coming ballet season have now been announced across much of America. As usual story ballets abound. But what stories do they tell? Narrative ballet remains a heritage park: an Old World never-never land. How many of us would actually like to inhabit those onstage worlds? Which choreographers are telling stories for our time?

As we anticipate the coming months, it’s useful to ask these questions, especially as they relate to issues of racial, ethnic and national stereotyping in story ballet. The ranks of ballet companies contain dancers of varied backgrounds; race-blind casting and interracial partnerships have been widespread for decades. Yet clichéd and sometimes offensive views of race remain alive and well across the art form. Several of the old ballets and a few of the new ones give us national and racial stereotypes that would be unshowable in a play or a movie. And yet they draw audiences. 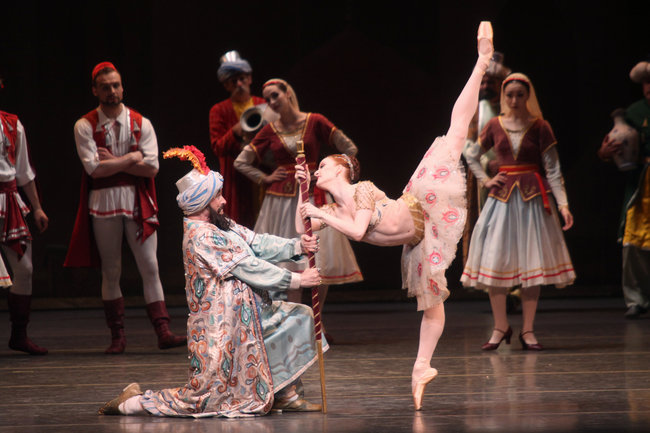 This year the Bolshoi Ballet transmitted live broadcasts of two 19th-century ballets featuring caricature-type depictions of people from the Middle East: “Raymonda” and “Le Corsaire.” The title heroine of “Raymonda” has two suitors; the unsuccessful one is Abderakhman, a Saracen. It’s likely that in the 1898 original  (recently reconstructed for La Scala Ballet in Milan) this character was conceived as dangerously seductive — the composer, Alexander Glazunov, gave him wonderfully sensuous music — only proving villainous later when he is rejected. But the Bolshoi’s production, changing the scenario, presents him primarily as a villain (the heroine first meets him in her nightmare) and strongly implies that of course he’s a villain because he’s a Saracen.

To make matters (much) worse, he’s accompanied in Act II by a retinue of Arab followers whose skins are all painted brown and whose version of ethnic dancing makes them entirely silly. The Bolshoi’s production of “Le Corsaire,” staged by Alexei Ratmansky, features something equally insensitive: a cartoon-comedy depiction of Turkish Muslims at prayer.

How much more enlightened are we in the West? American Ballet Theater ended its spring New York season with its “Corsaire,” in which no dancers paint their skin and in which the ballet is almost entirely a romp; the only things it treats seriously are spectacle and virtuosity.

All current “Corsaire” productions are foolish. Byron’s tragic narrative got buried long ago under multiple layers of showy accretions and trite, formulaic music. This does not, however, excuse the way that most of this staging’s Turkish characters are played as twits. They have silly walks; they’re played for comedy because they’re Turks. True, scarcely any role here is played seriously. This production, nonetheless, certainly proposes that those who wear turbans and slippers are automatically the biggest fools.

Watching this, you feel that ballet must be the one place in the world bypassed the whole period in world affairs since Sept. 11. Where but in the nowhere realm of ballet ever after is ethnicity still equated with villainy? What art other than ballet proposes (as does “La Bayadère”) that Indian dancing girls become white ballerinas when they go to heaven? Who outside ballet thinks today that it’s remotely acceptable to mock Muslims at prayer?

Escapism is part of ballet: O.K. But what these story ballets now offer is not escape any longer — it’s insultingly frivolous. Despite decades in which dancers of African, Asian and other backgrounds have shown they too can excel in ballet, these productions casually imply that it actually remains a white art form in which dancers of color may come and go as guests. Ballet is larger than any one race; but not so in these stagings.

How far should we tread in the uneasy quagmire of political correctness? You can spend a lot of time arguing about whether the Chinese or Arabian dances in “The Nutcracker” are racially offensive. I’ve seen “Nutcracker” productions where some of the national dances were replaced by others to more ethnographically correct music; these only prove that you unbalance “The Nutcracker” when you inject it with elements of non-Tchaikovskian music.

Tchaikovsky never intended his Chinese and Arabian music to be ethnographically correct, but they aren’t example of cultural imperialism: their extraordinary color and energy are far from condescending, and they make the world of “The Nutcracker” larger. Sure, there’s an element of stereotype involved, but exuberantly so (like the Gershwins’ “Stiff Upper Lip” about the English). Tchaikovsky even applied that stereotype to his native land; “Nutcracker” also has a Russian dance. They’re all irresistible. In a racially pluralist society I hope we can all live with a little ethnographical incorrectness.

But when is a little still too much? This year’s most divisive new story ballet has been Mr. Ratmansky’s “Firebird” for American Ballet Theater. Like his 2010 “Nutcracker” it shows his incomplete but partly marvelous gift for telling new stories or making old ones new. Its problems, though, include its happy ending.

Twelve difficult, quirky, conflicted green maidens find themselves transformed into uniform pretty platinum-blond brides. I’m among those who feel they’re diminished by the change. What bothered me at the premiere, however, was the dismaying way their oddity had been ironed out into conventional femininity. What bothered others, however, was their Aryan-ideal racial look.

I think this is simply an unfortunate error on the part of Mr. Ratmansky’s costume designer, Galina Solovyeva. Still, ballet just now doesn’t need mistakes like those blond wigs; and the interesting peculiarities of this “Firebird” are outweighed by its dismaying fondness for conformism.

There are few signs that the coming year will change the scene in these respects. A very few of the stories are new to ballet. (The Washington Ballet, for example, will stage the premiere of “The Sun Also Rises.”) Mainly, though, the coming season looks like a reshuffling of the same limited pack of narrative cards: “Cinderella,” “Le Corsaire,” “Don Quixote,” “Giselle,” “Nutcracker,” “Onegin,” “Romeo,” “Sleeping Beauty,” “Swan Lake.” At least six companies across America will dance at least five different versions of the three-act “Cinderella” — including those by Mr. Ratmansky and Christopher Wheeldon. But who will make a form of ballet fiction that reflects the ethnic mix of the world outside ballet?

“La Bayadère” appears to be resting for a year. The news comes, though, that Ballet Theater will revive “Le Corsaire” next spring in a new production. Both these ballets will remain problematic in any version. Their music is at best undistinguished, and large parts of their received choreography are formulaic, added or altered in the 20th century.

There is a slim kernel of Byronic romance in “Corsaire” and a large core of classical transcendence in “Bayadère” that are worth saving. The real future of ballet, however, depends not on these awkward old works but on new ones. And the general audience loves stories. It’s time it was given narratives  that showed pride in the larger world that bustles outside the ballet studio.