By BEN RATLIFF
Published: March 24, 2013
Bebo Valdés, a pianist, arranger and composer who was a musical lightning rod in Havana during the evolution of the mambo and, after a long fallow period, a million-selling success during the last two decades of his life, died on Friday in Stockholm, his primary residence since 1963. He was 94.

The cause was pneumonia, said his record producer Nat Chediak.

During the postwar and pre-Castro boom years for tourism and popular dance-band music inCuba, Mr. Valdés — 6 foot 4 (his nickname was El Caballón, or “The Big Horse”) and possessed of protean energy — was often the right man in the right place. His conservatory learning, his love of jazz and his curiosity about the extensions of African and European roots through Cuban music since the late 19th century, as well as his focus and discipline, put him in great demand. 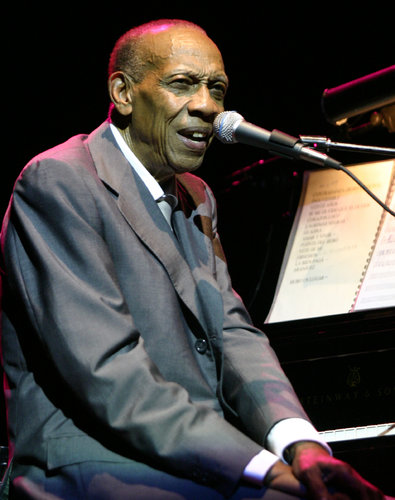 Rahav Segev for The New York Times——The pianist and arranger Bebo Valdés in New York in 2004.

But at the root of Mr. Valdés’s success was his pianism, which was influenced by Baroque fugues, Art Tatum and the left-hand rhythms in Ernesto Lecuona’s Euro-Antillean danzas and built on rhythmic principles he learned while playing for dancers alongside some of the great Cuban singers of his era, including Beny Moré, Pio Leyva and Orlando Cascarita Guerra.

The son of a cigar-factory worker and grandson of a slave, Ramón Emilio Dionisio Valdés Amaro was born on Oct. 9, 1918, in Quivicán, south of Havana. He studied classical music at the Conservatorio Municipal in Havana and, after finishing his studies in 1943, spent four years as pianist and arranger for the Cuban radio station Mil Diez, which mostly presented live music. From 1948 to 1957 he was the house pianist at the Tropicana Club in Havana, Cuba’s most glamorous casino, where he worked not just with Cuban artists but also with American stars like Woody Herman and Nat King Cole. (Mr. Valdés worked with Cole on “Cole Español,” the Spanish-language album Cole recorded, made mostly in Havana in 1958.)

In addition to writing arrangements for many hit records by Cuban singers, Mr. Valdés took part in the first descarga (jam session) recording made in Cuba, in 1952. That year he introduced the batá, the two-headed drum used in Santería religious ceremonies, into a popular dance-music context. In 1959 he founded his own orchestra, Sabor de Cuba with his son Chucho, then a teenager, sometimes on piano.

Leery of the Castro regime, Mr. Valdés left Cuba in October 1960, along with the singer Rolando La Serie, and moved first to Mexico and then to Spain, working as a pianist and arranger in both television and recording studios.

In 1963 he stopped in Sweden on a tour with the Lecuona Cuban Boys. There he met the 18-year-old Rose Marie Pehrson; they married and remained together until her death last year. In recent years they had lived in Benalmádena, Spain. Their sons Rickart and Raymond survive.

In addition to Rickart, Raymond and Chucho Valdés — a founder of the Cuban jazz group Irakere and a virtuosic ambassador for Cuban music worldwide — Mr. Valdés’s survivors include two other sons, Raúl and Ramón; two daughters, Miriam and Mayra; and several grandchildren.

Mr. Valdés never returned to Cuba. He played piano in Stockholm hotel lounges for more than three decades. In 1994, the Cuban jazz saxophonist Paquito D’Rivera invited him to a recording session in Germany; the result was a showcase of Mr. Valdés’s old compositions, “Bebo Rides Again.” He later took part in “Calle 54,” Fernando Trueba’s 2000 documentary about Latin jazz, in which he reunited with Chucho for only the second time in four decades.

On the albums of his final period, largely produced by Mr. Chediak and Mr. Trueba, he performed a wide range of music: 19th-century Cuban songs, mambo, bolero and Afro-Cuban jazz. “Lagrimas Negras,” a 2003 collaboration with the flamenco singer Diego El Cigala, became a hit in Europe and sold more than a million copies worldwide.