Researchers have discovered an ancient 6,500-year-old human tooth which could provide evidence of the earliest form of human dentistry.

And while 21st century dentists boast all manner of modern technology for dealing with aches and pains, the ancient find indicates that the first ever dentists treated toothache with beeswax.

Experts in Italy who studied the 6,500-year-old piece of human jaw and tooth, found more than 100 years ago in Slovenia, believe the beeswax was applied around the time of the person’s death, but cannot confirm whether it was shortly before or after.

The first filling: A 6,500 year old tooth with a beeswax filling (within the yellow dotted line).

However, if it was before death, they said that it was likely intended to reduce pain and sensitivity from a vertical crack in the enamel and dentin layers of the tooth.

Dr Claudio TUniz from the Abdus Salam International Centre for Theoretical Physics, who led the research, said: ‘It is probably also due to its use in non-alimentary activities, possibly such as weaving, generally performed by Neolithic females.’

Evidence of prehistoric dentistry is sparse, so the new specimen, found near Trieste in modern today Slovenia, may help provide insight into early dental practices.

Dr Federico Bernardini added: ‘This finding is perhaps the most ancient evidence of pre-historic dentistry in Europe and the earliest known direct example of therapeutic-palliative dental filling so far.’

The find was reported in the journal PLOS ONE. 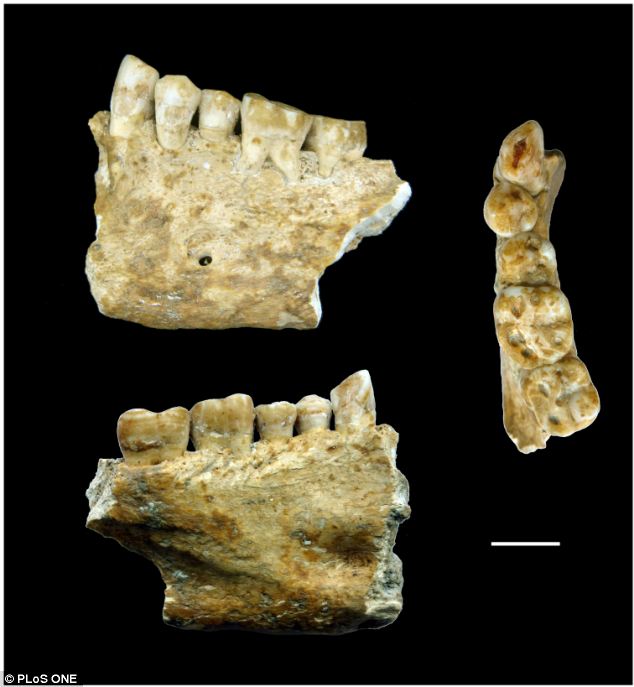 The Lonche jaw from a karstic cave of southern Slovenia, which researchers were stunned to find contained a beeswax filling.

The researchers also believe they may know the patient’s dental history.

‘If the filling was done when the person was still alive, the intervention was likely aimed to relieve tooth sensitivity derived from either exposed dentine and/or the pain resulting from chewing on a cracked tooth: this would provide the earliest known direct evidence of therapeutic-palliative dental filling,’ they wrote.

The damaged tooth showing the fractures through the dental tissues The main vertical fracture (in blue) and the sub-horizontal ones (in red) are shown in lingual (A), distal (B) and occlusal view (C). 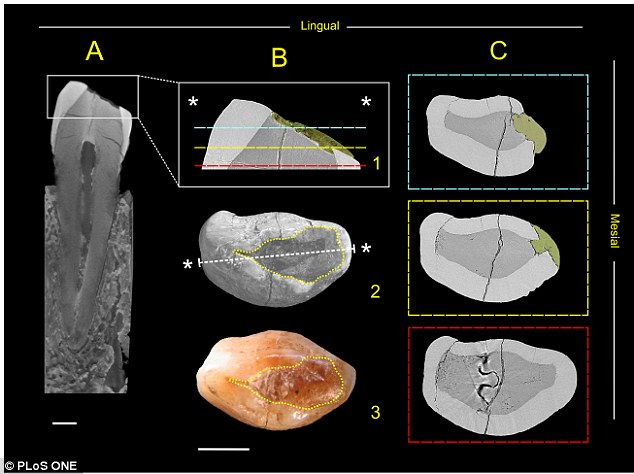 The researchers used a range of scanning techniques to see inside the tooth and reveal the beeswax filling.