Few subjects appear to provoke from readers as much debate, and anger, as race does. Since Philadelphia Magazine published its article “Being White in Philly: Whites, race, class, and the things that never get said” in late February, it has drawn a public rebuke by the city’s mayor, the threat of a boycott by the local African-American Chamber of Commerce and at least two forums where the magazine’s editor and the article’s writer answered angry questions. 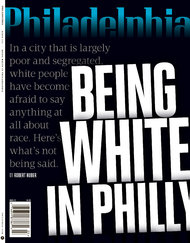 “I absolutely stand by the journalism in the story,” Tom McGrath, the editor of Philadelphia Magazine, said.

Controversy clearly can be good for business. The magazine, whose circulation has declined nearly 10 percent in the last five years, according to the Alliance for Audited Media, had a minor boom in sales from the issue. Tom McGrath, the editor, said the article generated 1.4 million page views, a milestone for the site. The article has over 6,000 comments online, and Mr. McGrath said several vendors told the magazine that they sold out of the issue and wanted more copies.
But the issue’s notoriety may have a downside. The Philadelphia Inquirer columnist Karen Heller criticized the article’s author, Robert Huber, for providing anonymity to all of his interview subjects and painting a portrait of a city devoid of any voices other than white residents.
Mr. Huber did not include any interviews with African-Americans, and all 10 white Philadelphia residents in the article were quoted by first name or by a changed name. The article also shed light on how little diversity there is at the magazine, which has one full-time African-American employee.
Adrienne Simpson, an event planner at Philadelphia Magazine, wrote in The Philadelphia Inquirer: “The all-white staff of a city magazine, a city whose black population makes up 44 percent of its residents, is ill-equipped to spearhead any kind of enlightened discussion about race. Why? Because its hiring practices have made it abundantly clear that black people and their opinions have no place in its discussions. And I don’t just mean discussions about race.”
Shalimar Blakely, executive director of the African-American Chamber of Commerce of Pennsylvania, New Jersey and Delaware, said she hoped that the controversy might persuade Philadelphia Magazine to consider creating a more diverse work environment. While she was hopeful that the magazine would make changes on its own, she stressed that the business community would resort to more serious measures.
“Whether or not it will turn into a boycott, I don’t know,” Ms. Blakely said. “I’m open to whatever steps it takes to make the magazine more diverse.”
Mr. McGrath, the editor, said: “I absolutely stand by the journalism in the story,” but he added that he was open to increasing diversity in the magazine’s workplace.
“It’s an issue I’ve committed to taking a look at,” he said, “in terms of the way we go forward, in how we handle the sensitive issues about race.”

Boy, 9, charged with murder after he 'beat 14-month-old baby to death' in room they were sleeping in