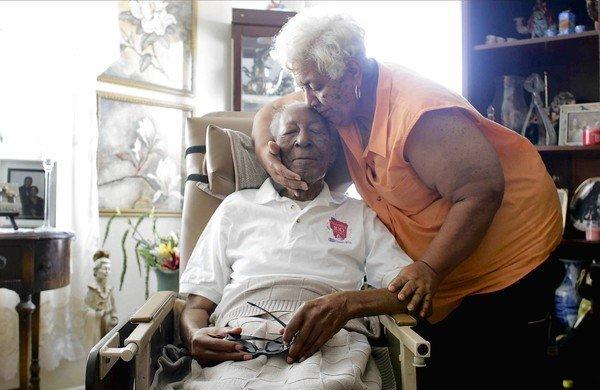 Ben Isaacs gets a hug from daughter Dolores White in 2010. “I just kind of liked traveling around and seeing the country, and helping people,” he said of his job as a Pullman porter. Isaacs has died at age 107. (Gina Ferazzi / Los Angeles Times)

For more than three decades, Ben Isaacs worked as a Pullman porter, one of the uniformed railway men who served first-class passengers traveling in luxurious sleeping cars — a much-coveted job for African Americans between the 1870s and late 1960s.

Isaacs, a charismatic centenarian who was believed to be the oldest surviving Pullman porter, died of kidney failure Wednesday at his home in Victorville, according to his brother, Andrew Isaacs. He was 107.

Andrew Isaacs said his brother, who in his later years went blind, was hospitalized on Aug. 10 and released a couple of days later.

“His kidneys shut down,” said Isaacs, 89, who lives in Sacramento. “In three weeks he would have been 108.”

Born Sept. 8, 1904, in Kansas City, Kan., Ben Isaacs was one of five children of Breckenridge “B.R.” Isaacs, a butcher, and Cora, a school teacher and beautician. Andrew Isaacs said his brother graduated from the local Sumner High School, which educated black children.

Straight out of high school in the early 1920s, Isaacs landed a job with the Atchison, Topeka and Santa Fe Railway. He labored “in the shop where they worked on steam engines,” Andrew Isaacs recalled.

While working for the Santa Fe, Ben Isaacs fell ill with pneumonia. His employer sent him to a hospital in Albuquerque, and he remained in New Mexico for a couple of years before relocating to San Diego and then to Los Angeles in 1929, Andrew Isaacs said.

By then, Ben Isaacs had married a girl from his hometown, in what would be the first of at least four marriages in his lifetime, his brother said.

In Los Angeles, Isaacs found work as a chauffeur. But his life-changing plum assignment came in April 1936 when he began working as a Pullman porter, according to the Chicago-based Newberry Library, which keeps data on Pullman employees.

The Pullman Palace Car Co. was founded by George Pullman in 1867 and was most famous for developing the railroad sleeping car. The company primarily hired African Americans, many of whom were elevated to middle-class status by their jobs.

In a 2010 interview with The Times, Isaacs fondly recalled his days on the trains. Though challenging — at times he would service up to 50 berths — the job opened up Isaacs’ world.

“I just kind of liked traveling around and seeing the country, and helping people,” he said.

Andrew Isaacs said that passion for adventure stuck with his brother, who in later years bought a trailer and took it on road trips across the country

Ben Isaacs gushed about encounters he had with the rich and famous, such as prominent silent film actresses Anita Stewart and Gloria Swanson, while working as a porter. His said his favorite celebrity he met was cowboy singer and actor Roy Rogers.

Ben Isaacs “was a people person,” said his granddaughter Regina Dobbins. “You never heard him say anything negative. He was very kind-hearted … sentimental.”

Isaacs retired from the railroad in December 1968, records from the U.S. Railroad Retirement Board show.

Records kept by the A. Philip Randolph Pullman Porter Museum in Chicago had recognized 102-year-old Lee Wesley Gibson of Los Angeles as being the oldest living Pullman porter, until Isaacs — born five years earlier than Gibson — came forward in 2010.

Andrew Isaacs said his brother’s wish was to be cremated and to have his ashes buried at Evergreen Cemetery in Los Angeles alongside Alene, his last wife of more than 20 years.

How big bodies and sharp eyes killed off the Neanderthals