Neanderthals had sharper eyesight and bigger bodies than our early ancestors, but these traits only contributed to their eventual downfall, new research suggests.
The brains of our now-extinct evolutionary cousins had too much to do managing their vision and the physical demands of their bodies to spare a thought for building communities.
That meant that the more socially adept early modern humans were better able to cope with environmental change and out-compete their Neanderthal rivals for shelter and food. 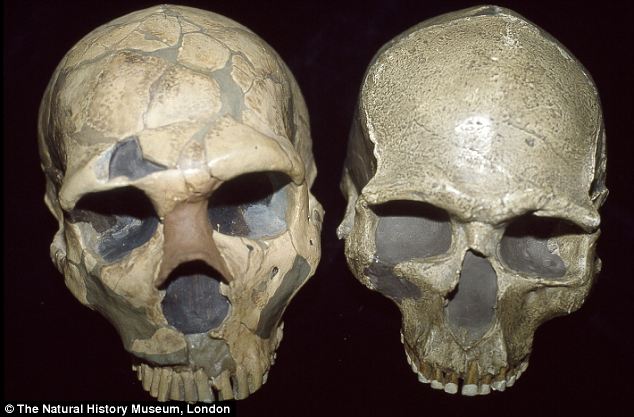 Outmatched by Homo sapiens, they eventually followed in the footsteps of the dinosaurs and became extinct.
Neanderthals had already long occupied Eurasia when early modern humans began migrating out of Africa about 70,000 years ago.
For a time, the two breeds of human lived side-by-side, and many experts believe they even interbred. But by around 30,000 years ago the Neanderthals had vanished.
Although early modern humans and Neanderthals were similar in many ways they also had distinct differences.
Neanderthals were physically bigger and stronger, their foreheads and chins sloped at more of an angle, and their noses were more pronounced.
Significantly, they also had larger eyes, which may have evolved to cope with lower light levels in northern latitudes compared to the sunny plains of Africa from where our ancestors emerged.
Like modern humans, they used tools and weapons, and they may also have worn ornaments and painted cave walls. However, they were culturally far less sophisticated. 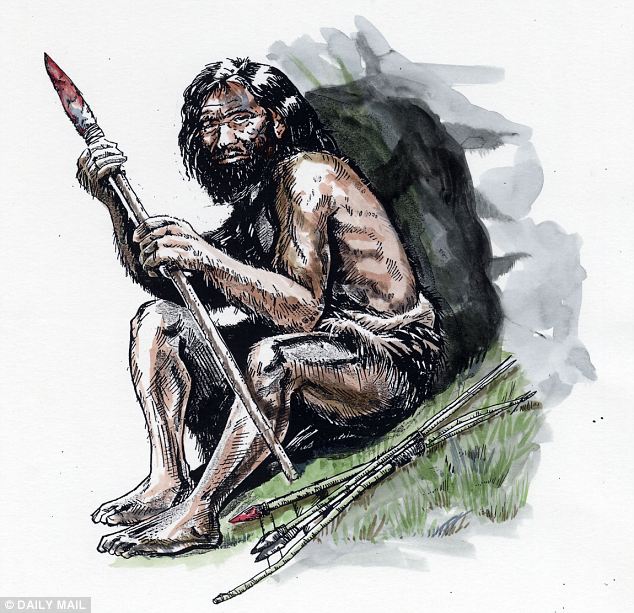 Not clever enough for Facebook: Like modern humans, they used tools and weapons, and they may also have worn ornaments and painted cave walls. However, they were culturally far less sophisticated


The new research, published in the journal Proceedings of the Royal Society B, shows that Neanderthals’ brains were similar in size to those of modern humans, but structured differently.
Analysis of fossil data suggests that larger areas of the Neanderthal brain were devoted to vision and movement, leaving less room for the higher level thinking needed to form large social groups.
‘Since Neanderthals evolved at higher latitudes and also have bigger bodies than modern humans, more of the Neanderthal brain would have been dedicated to vision and body control, leaving less brain to deal with other functions like social networking,’ said lead researcher Dr Eiluned Pearce, from Oxford’s Institute of Cognitive and Evolutionary Anthropology.
‘Smaller social groups might have made Neanderthals less able to cope with the difficulties of their harsh Eurasian environments because they would have had fewer friends to help them out in times of need.
‘Overall, differences in brain organisation and social cognition may go a long way towards explaining why Neanderthals went extinct whereas modern humans survived.’ 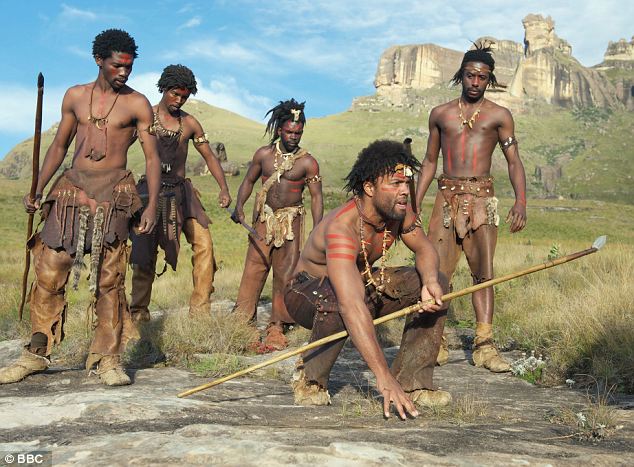 Social animals: Our ancestors emerged from the sunny plains of Africa, meaning they didn’t need such large eyes and bodies, which gave them more mental capacity left for developing social groups


The scientists studied an array of fossils dating back 27,000 to 75,000 years, comparing the skulls of 32 anatomically modern humans with those of 13 Neanderthals.
They found that Neanderthal skulls had significantly larger eye sockets than modern humans, which would once have housed larger eyes.
The Oxford team analysed brain structure by looking at the shape of the skull interiors.

HOW THE SCIENTISTS WORKED OUT NEANDERTHALS’ BRAIN CAPACITY

The researchers calculated the standard size of fossil brains for body mass and visual processing requirements.

They also used the known relationship between the height of the eye socket and the size of visual brain areas in living primates to estimate how much of the brain was dedicated to visual processing in Neanderthals and modern humans.

The difference between the two was then subtracted from the Neanderthal brains.

This created a set of brains the size they would be if all the fossils had the same body mass as a living human and had the same sized visual brain areas.

Once the differences in body and visual system size are taken into account, the researchers were able to compare how much of the brain was left over for other cognitive functions.

After taking account of body mass and visual processing requirements, they were able to calculate how much of the brain was available for other mental functions.
Co-author Professor Chris Stringer, head of human origins at London’s Natural History Museum, said: ‘The large brains of Neanderthals have been a source of debate from the time of the first fossil discoveries of this group, but getting any real idea of the “quality” of their brains has been very problematic.
‘Hence discussion has centred on their material culture and supposed way of life as indirect signs of the level of complexity of their brains in comparison with ours.
‘Our study provides a more direct approach by estimating how much of their brain was allocated to cognitive functions, including the regulation of social group size; a smaller size for the latter would have had implications for their level of social complexity and their ability to create, conserve and build on innovations.’
Professor Robin Dunbar, another member of the Oxford team, said: ‘Having less brain available to manage the social world has profound implications for the Neanderthals’ ability to maintain extended trading networks, and are likely also to have resulted in less well developed material culture – which, between them, may have left them more exposed than modern humans when facing the ecological challenges of the Ice Ages.’
Read more: http://www.dailymail.co.uk/sciencetech/article-2292247/How-Neanderthals-lost-Facebook-Big-bodies-sharp-eyes-left-mental-space-social-networking.html#ixzz2NQiEkhKe

Adele McQueen: A pioneer in and out of the classroom