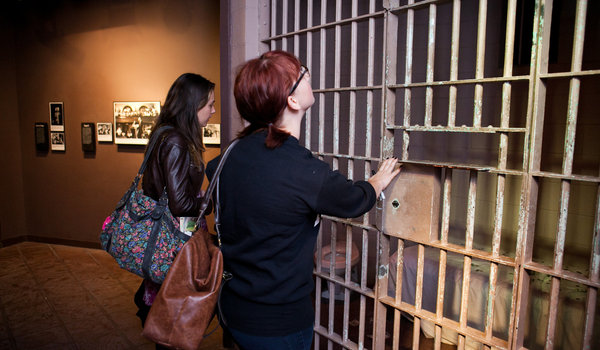 THE visitors were old and young, black and white, from neighborhoods nearby and cities on the other side of the world. But on a recent morning in the Birmingham Civil Rights Institute, they were all stopped in their tracks by one particular display.

“It was unnerving,” said Hollie Pich, 21, a white college student from Sydney, Australia.

“Is that real?” asked Kierra Hutchins, 14, one of a group of students from Smith Middle School here, who clustered around the exhibit — a Ku Klux Klan robe and a cross.

The white, hooded robe was donated to the institute anonymously by someone who found it in a trunk in a house. The crude, partly burned wooden cross planted behind it was given to the museum by the local F.B.I. office. Together they stood in a plexiglass case, illuminated by a ghostly ceiling light, at the head of the museum’s aptly named Confrontation Gallery.

The Klan robe and the cross brought up vivid memories for another visitor, Pat’s husband, Willie Chambers, 67. “I was chased by the Klan,” recalled Mr. Chambers, who grew up in Selma, Ala., another flashpoint of the civil rights movement. “We knew who they were,” he said. “My mother told us, ‘Just don’t let them catch you.’ ”

Alabama, of course, was not the only part of the South involved in the civil rights movement. But some of the most infamous scenes unfolded in the blocks surrounding the 58,000-square-foot institute. Opened 20 years ago, the museum was built directly across the street from the Sixteenth Street Baptist Church, where on Sept. 15, 1963, a bomb planted by segregationists killed four black girls. The blocklong museum faces Kelly Ingram Park, where earlier that same year, the public safety commissioner, Bull Connor, blasted protesters with fire hoses and set dogs on them. Many of the protesters, who were trying to march in protest of racial segregation laws, were children.

The institute is one of the largest and oldest of about a dozen civil rights-themed museums in the South. It was the inspiration of a group of residents led by Richard Arrington Jr., who in 1979 — barely 15 years after the worst of the unrest — was elected the city’s first black mayor. “We felt it was important for people from Birmingham to tell the story of this period and not let others tell it for us,” said Mr. Arrington, who retired in 1999 after five terms as mayor. The initial response from the local business community was not enthusiastic, he said. “I was told that we were only going to reopen old wounds,” he said, and there was concern that it would be a “museum of hate,” or even a magnet for radicals.

Birmingham’s African-American population was supportive of the idea of a museum, Mr. Arrington said, “until I explained that we’d have to raise property taxes in order to fund it.” He chuckled as he recalled the reactions recently while sitting in the institute’s boardroom. “They grew cool very quickly.”

Referendums to pay for the museum were held in 1986 and in 1988. Both were defeated. “That caught me completely off guard,” Mr. Arrington acknowledged. “I was thinking about forgetting the whole idea, but the advisory board encouraged me to continue the fight.”

The mayor decided to do a risky end run around the voters: He was able to sell some city property and, using a loophole in the law, direct the money to building the museum, which opened in November 1992. Twenty years later, the Birmingham Civil Rights Institute attracts about 150,000 visitors annually — including Barack Obama (who visited while he was a state senator), former President Jimmy Carter, the author Toni Morrison and Lynne Cheney, the wife of Dick Cheney, the former vice president. Museum officials said Mrs. Cheney donated $5,000 after her visit.

The institute also houses a growing archive of documents and about 500 recorded oral histories related to the civil rights period.

In 2005, the institute was the second African-American-themed museum in the country to be accredited by the American Association of Museums. It is also an affiliate of the Smithsonian Institution. Perhaps most surprising, at least to its early critics, is that it has become a major tourist attraction.

In 2006, the institute’s president and chief executive, Lawrence J. Pijeaux Jr., was named Alabama’s tourism executive of the year. “Can you imagine that?” said Dr. Pijeaux, a native of New Orleans who has a doctorate in education and became president three years after the institute opened. “A black man who is leading an institution that chronicles all this unpleasant racial history in the state of Alabama” — he paused — “was selected as the state’s tourist executive of the year? It shows you how far things have come.”

The story told to visitors starts with the history of Birmingham, a thriving industrial center in the first half of the 20th century, then explains why it became “Bombingham,” a battleground in the larger civil rights movement.

Exhibits include a stylized rendition of the heavily segregated city in the 1950s, replete with vintage water fountains designated for use by race, and a sobering side-by-side comparison of white and black classrooms of the time. The classroom for white students has a motion-picture projector and glossy textbooks, while the classroom for black students is furnished with little more than beat-up wooden desks.

Many artifacts are on display, like one of the armored police vehicles used by Connor to attack the marchers and a replica of a burned-out Freedom Rider bus. There is also the actual barred door from the city jail cell in which the Rev. Dr. Martin Luther King Jr., arrested in April 1963 during the demonstrations, wrote his “Letter from Birmingham Jail,” a defense of his tactics that is now considered a definitive document in human rights literature.

The Rev. Gordon Gibson, a white Unitarian minister who was arrested in Selma in 1964 along with Dr. King, now leads civil rights heritage tours and considers the institute and the National Civil Rights Museum in Memphis two of the best museums on the period. Still, he can understand the institute’s incubation struggles. “I’m sure they had a lot of resistance, and not just from whites,” said Mr. Gibson, who lives in Knoxville, Tenn. “I’m sure there were some from among the movement who might say, ‘Don’t try to stick me in a museum. That’s not going to tell what it was like to face down Bull Connor.’ ”

Veterans of the Birmingham civil rights campaign — which was led by the Rev. Fred L. Shuttlesworth, the charismatic Baptist minister whose statue is in front of the institute — didn’t always agree with museum organizers. “Some of the foot soldiers didn’t trust us,” recalled Odessa Woolfolk, a former chairwoman of the museum’s board who led its planning committee. “We also got a lot of ‘you didn’t hear the real story about what happened that day.’ ”

Ultimately, the community coalesced around the institute. So has Birmingham’s business sector, which now contributes significantly to the museum’s annual $2.2 million budget and also holds corporate events at the institute.

The interpretation that the institute’s planners settled on — and will celebrate in November with a dinner gala and a weeklong series of educational events — is evenhanded and without a sense of triumphalism.

“It’s a story with a complicated ending,” said Ms. Woolfolk, acknowledging the racial issues that still affect both her city and her country. “But it’s a story in which hope prevailed.”

The House on Shelter Island: The Story of a Northern Slave Plantation

Some Blacks Insist: 'I'm Not African-American'