Last week, 20 African-American women with various connections to athletics met in Harlem at the Schomburg Center for Research in Black Culture. This was a private event — no stage, no audience — but a gathering of accomplished, like-minded women who had come to tackle the vexing issues of gender and race. The topic was “What’s Not Being Said About the Title IX Anniversary.” 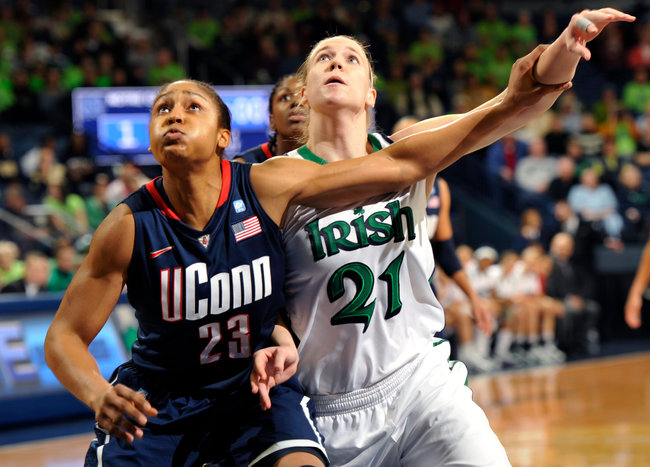 The former Connecticut basketball star Maya Moore, left, recently participated in a Washington symposium, “Title IX and Beyond: How Do We Get the Rest of Our Girls in the Game?”

They were diverse. There was an 88-year-old grandmother and a 21-year-old recent college graduate. They were executives of sports foundations and nonprofit groups. A lawyer, a psychologist, coaches, recently retired athletes and grass-roots organizers. They talked about their experiences — and lack of experience — in sports. But the overriding question of the evening was how to widen sports opportunities for black girls when access increasingly hinges on financial resources and a steep time commitment from parents.

This month marks the 40th anniversary of Title IX of the Education Amendments becoming law. On June 23, 1972, President Richard M. Nixon signed into law the statute known as Title IX, which declared, “No person in the United States shall, on the basis of sex, be excluded from participation in, be denied the benefits of, or be subjected to discrimination under any education program or activity receiving federal financial assistance.”

This legislation has been monumental in women’s and girls’ sports participation. But the focus of Title IX has been gender equity, not racial equity in women’s sports. The most glaring outcome of the legislation is that white women — as athletes and administrators — have been the overwhelming beneficiaries.

“My idea was to make sure that we tell our own story,” said Tina Sloan Green, the co-founder and president of the Black Women in Sport Foundation, based in Philadelphia. Sloan Green was the first black head coach in women’s college lacrosse, at Temple, from 1973 to 1992. “If we don’t advocate for black women, who will we have to be the first to advocate for ourselves? We have to be the first ones at the table. We have to have some proactive measure for making sure there is increased numbers of African-Americans. We’ve got to take charge of our agenda.”

A few days before the Schomburg salon, the Aspen Institute Sports and Society Program held a public symposium in Washington with a similar theme: “Title IX and Beyond: How Do We Get the Rest of Our Girls in the Game?” The focus was broader — women of color — but it dealt with the same issues of a widening gap of opportunity separating white women and nonwhite women.

The Washington panel included the former University of Connecticut basketball star Maya Moore; Benita Fitzgerald Mosley, an Olympic gold medalist in track and field;Anita DeFrantz, an International Olympic Committee member; and Dionne L. Koller, an assistant professor of law at the University of Baltimore and the director of the Center for Sport and the Law.

There was a distinct difference in how the two groups framed the array of problems. At the Aspen Institute forum, the sense was that the inequality of opportunities was an intentional blind spot that could be corrected with good will. In Harlem, there was a sense — among some, although certainly not all — that the gap was in some ways a moat designed to protect white privilege, opportunity and power.

“The value of sports is not only the physical and the mental, but it’s also valuable in terms of preparing you for an administrative opportunity, especially with sport being a multibillion-dollar business,” Green said.

She said she did not think that the inequities in sports opportunities were an accident. “These white women don’t want us to compete with them,” she said. “They want their kids to get the scholarships. They’re thinking about themselves. They give us all kinds of awards, but when it comes time to distributing the money, it’s a whole other story.”

Race is by far the most debilitating limitation of Title IX, yet you barely hear discussion of it. This reflects an old way of thinking about inequality, in which gender was the model. The only model.

“That’s right out of the feminist movement,” said Koller, a panelist in the Washington forum. “To some extent, the sports piece of the feminist equality movement stayed stuck in a 1970s version of the equality axis of oppression, especially experienced by women and girls of color. In the work force, we’ve moved on; in our equality thinking, we’ve moved on. But in the sports construct, we’ve stayed at the 1970s thinking that it’s one way, it’s gender inequality, and that’s it.”

She added: “We should be allowed to say that Title IX doesn’t produce the solutions for all girls, because that’s the next step for advancing to a solution that does.”

Fitzgerald Mosley, of the Washington forum, discovered sports through physical education classes. She was exposed to gymnastics at school, liked it and asked her parents for private gymnastics instruction. After two years, the gymnastics coach — who was also the track coach — invited Fitzgerald to try out for the track team. She became a seventh- and eighth-grade standout, then a high school star, and earned a scholarship to the University of Tennessee.

She made the 1980 Olympic team that boycotted the Moscow Games, and she won a gold medal in the 100-meter hurdles in the 1984 Olympics in Los Angeles. Today Fitzgerald Mosley is chief of sport performance for USA Track and Field and chairwoman of the board at the Women’s Sports Foundation.

“There’s a lot to celebrate,” Fitzgerald Mosley said. “My whole life is indebted to that law and the opportunities it presented to me.”

According to a 2007 report by the United States Department of Education, among high school sophomores, white girls had a 51 percent participation rate in sports, compared with 40 percent for black girls. The percentages were lower for Asian/Pacific Islanders (34 percent) and Hispanics (32 percent).

The lack of access to sports at youth levels becomes manifest at the intercollegiate level, where African-American women are underrepresented in all but two sports: Division I basketball, where black women represent 50.6 percent of athletes, and indoor and outdoor track and field, where they represent 28.2 and 27.5 percent. They are all but missing in lacrosse (2.2 percent), swimming (2.0), soccer (5.3) and softball (8.2). They are an underrepresented rising presence in volleyball (11.6).

According to the N.C.A.A.’s 2009-10 Student-Athlete Race/Ethnicity Report, white women held 166 of the 300 head coaching jobs in N.C.A.A. Division I women’s basketball; black women held 35 of them.

In 2012, 40 years after the passing of a law that focused merely on gender equity, women committed to equality and access for girls to a wider array of sports opportunities must finally confront the vexing issues of race, gender and class.

“Title IX is not the effective tool it has been made out to be for leveling the playing field for all girls,” Koller said. “There is unfinished business, but we’re not talking about it. Until you put it out there, you’re not going to have any real conversation about this.”

The conversation might very well open doors that have been closed for far too long.