Britons Steve McQueen, Idris Elba, Chiwetel Ejiofor and David Oyelowo are behind this Oscar season’s key titles. Has Britain’s film industry shot itself in the foot by not providing the right environment for black actors and directors to flourish?

David Oyelowo was born in Tooting Bec. But if you know the name, it’s likely from the credits of American films – Jack Reacher and Lincoln, Lee Daniels’ The Paperboy and Daniels’ new one, The Butler, which just topped an Oscar tipsters’ chart of the key films of the 2013-14 awards season. Or, rather, it tied for first place, along with David O Russell’s latest, American Hustle, and 12 Years a Slave, Steve McQueen’s take on the true story of a free black man sold into slavery. Lower down the list are Fruitvale Station, Ryan Coogler’s acclaimed drama about the real-life killing of a young African-American man by San Francisco transport police in 2009, and the biopic Mandela: The Long Walk to Freedom. The trend is not hard to identify. But it is hard to unreservedly applaud its implications.
“I think it would be a cataclysmic failure for black film if 2013 was remembered as the year of the black Oscar,” says Oyelowo. “If this year is remembered, it should be as an indictment of the past. Up until now, the British film industry has said: ‘There isn’t an audience for black films. We don’t have the actors. Black doesn’t travel.’ I hope 2013 acts as a defiance for those false pretences.” 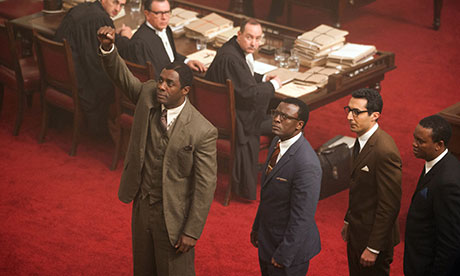 
But in so far as those pretences have taken hold, they’ve triggered something of a brain drain: Fruitvale Station aside, many of the films listed have heavy British involvement, but are set in the United States (or, in Mandela’s case, South Africa). Mandela stars Londoners Idris Elba and Naomie Harris, and 12 Years a Slave is directed by Ealing-born Steve McQueen and stars Forest Gate’s Chiwetel Ejiofor. Both Mandela and Slave premiere at the Toronto film festival, which starts next week. Also debuting there are Half of a Yellow Sun, the debut film from the Brixton-based Nigerian playwright Biyi Bandele; the period drama Belle, about the daughter of a naval officer and a slave in the 1700s, from Streatham-born actor turned director Amma Asante; and The Double, Richard Ayoade’s follow up to Submarine.
“I look for the best films first, and these were the best films I found this year,” says Toronto’s artistic director, Cameron Bailey. “The early 1990s was a great time for black cinema, but then there was a really serious dip. Now there’s a whole generation of new black directors. It’s a really rich time for black British directors in particular.” 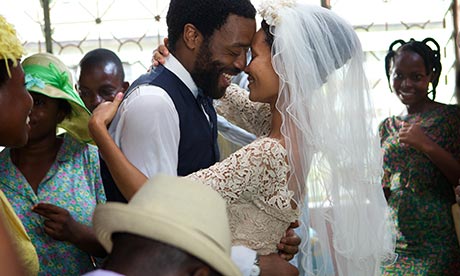 Chiwetel Ejiofor and Thandie Newton in Half of a Yellow Sun.


But can the British film industry take credit for black Britain’s new presence in Hollywood? Many are sceptical. For while Britain has nurtured black talent, many feel the country has yet to fully embrace black storytelling on screen in the same way that was in evidence for decades across the pond.
“When are we going to get films and television about the black British people from our past?” asks Stephen Bourne, a London-based historian of black cinema. “In this country we don’t want to acknowledge that black Britain has a heritage. Mary Seacole is the only black Briton in the primary school curriculum. That’s a terrible thing for our society.”
Glance at the careers of many of our best black actors and directors and a pattern emerges: they have learned at home and sought work abroad. Britain has become a feeder school for the United States – where there is an industry that allows its black stars to tell their own stories in the way they want to. 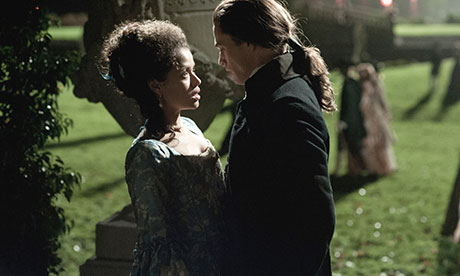 
Says Oyelowo: “I loved living in the UK, and it’s still my home. But it became clear I wasn’t going to be able to tell the stories I wanted to tell. When I went to British film investors with stories of the black experience in a historical context, I was told verbatim: ‘We’re looking for Dickens or Austen. Your story is a hard sell.’ Britain is not inclusive of how I look or who I am, so I looked to America.”
This conservatism, he thinks, stems from a nexus of affluent white men in control of the industry’s finances: “It’s a question of supply and demand. The black British audience hasn’t been served. Britain is a more multicultural place with more cross-proliferation than America, but I think there’s a reluctance in our cinema to accept the real Britain we live in – and that’s because we still operate within the auspices of a class system motivated by nepotism.”
The refrain chimes with Zawe Ashton, star of Channel 4’s Fresh Meat and Carol Morley’s Dreams of a Life, who is about to direct her first film, partly, she says, in response to the paucity of roles on offer: “I feel I’ve had to work a hundred times harder than most actresses because I have to pick through a minefield every time I’m offered a part,” she says. “You want to show your range, but the complexity of roles isn’t there for black actors. We have to make them for ourselves.”
This independent mindset is helped by the cheap production and distribution technologies now common in the industry: “Being a black film-maker in Britain is incredibly difficult, but still possible,” says Bandele, who moved to London from Nigeria in 1990. “When I started writing in the early 90s, the industry was much more inclusive than it is now, and I have absolutely no idea why that is. I have to constantly battle to be allowed to write black characters who are as noble and flawed as any other human being.” 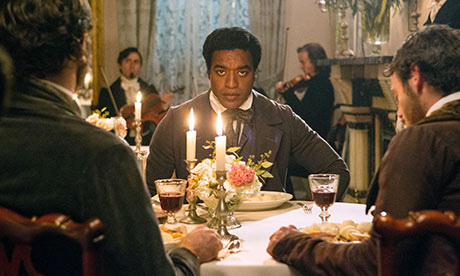 “British people are simply not made aware of how bound up they are with people from the so-called elsewhere,” says John Akomfrah, director of the forthcoming The Stuart Hall Project, a documentary about the influential Jamaican intellectual’s search for his identity in postwar England. “The challenge black film-makers face is to get through that attitude, because no one else is going to do it for them.”
If black storytelling is to gain a permanent foothold in British cinema, then the burden of proof lies with the movie-going public. “I think audiences are only just beginning to recognise that black stories are universal,” says Asante. “It’s still hard, but it means we’re better able to convince film investors we’re not just telling niche stories with narrow concerns.”
In her first interview since assuming the position, Cheryl Boone Isaacs – the first black president of the Academy of Motion Picture Arts and Sciences – said: “We need to really pump up the diversity of minorities that continue to make movies and welcome as many as possible into the Academy.” In March, it looks likely she will welcome many of Britain’s best to her first Oscars. But how many of the winners will stand at the podium and give thanks to the British film industry?

From poverty in Manchester to NFL superstardom: 24-year-old is selected for top American Football team just TWO YEARS after taking up the sport

The Jewish role in the African Slave Trade