Behind The Dixie Stars (Short Documentary)

Published June 13, 2011Associated Press
RALEIGH, N.C. (AP) — As America embarks on four years of Civil War commemorations, it revives an unsettling debate that lingers 150 years after the conflict: how to view the role of African Americans in the Confederacy.
It arose last year when a Virginia textbook was yanked over protests that it inaccurately claimed thousands of blacks served as Confederate soldiers. More recently, a North Carolina community turned down an effort to erect a monument to 10 black men who served the Southern army and later collected Confederate pensions.
Confederate law prohibited slaves from serving as soldiers until March 1865, when it was changed in a last-gasp effort to strengthen troop numbers.
Yet the debate continues bubbling to the surface in many ways.
Gregory Perry of Monroe, N.C., who learned recently that an ancestor was awarded pension for Confederate service, says it’s hard to reconcile that fact with what he knows firsthand about being a black man in the South. “I grew up in the era of  Malcolm X and militancy, and would never have considered something like this possible,” said Perry, 46, reflecting on the life of his great-great-grandfather, Aaron Perry.
“I wonder: If Aaron Perry knew the Union Army was coming to free him, why did he join the other side?”
Most Civil War historians agree black slaves and even some free blacks contributed crucial manpower to the Southern war effort — but it was mostly menial work done under duress or for survival, not out of support for the secession movement.
John David Smith, professor of American history at the University of North Carolina-Charlotte and a member of North Carolina’s Sesquicentennial Academic Advisory Committee, said the South’s 11th-hour effort to recruit black soldiers was “too little, too late.”
“There’s no evidence of any real mobilization of slaves,” Smith said. At most, a company or two — including one of hospital workers — was ever organized.
Yet efforts to depict blacks as Confederates persist.

The Museum of the Confederacy in Richmond once sold black toy soldiers, clad in Confederate gray. They were pulled from shelves in fall 2010 after several complaints.
Historian and library director John Coski posted an explanation in the gift shop.
“There is much wartime and postwar evidence of African-Americans acting in ways that suggest loyalty to the Confederacy — staying ‘home’ even when there was an opportunity to run away, even burying the family silver,” Coski wrote. But as to whether significant numbers of black men enlisted as combat soldiers, Coski says “the answer is a resounding ‘no.'”
Smith says he believes painting African Americans as Confederate sympathizers plays down the real causes of the Civil War.

Wary Clyburn was a Union County pensioner who served in the Confederate Army. Earl Ijames, an N.C. Museum of History curator, said the photo probably was taken in 1913. Clyburn played the fiddle, considered a prime diversion of the time, Ijames said. Clyburn passed the picture down to his daughter. COURTESY OF MILES GARDNER AND MATTIE RICE

“What gets professional historians concerned is when certain people start calling these people soldiers. It all goes back to how you define soldier. And for me, the story of so-called black Confederates is not as important as the story of why it keeps coming back.”
He added, “I think it keeps coming up because there are certain people who resist the idea that slavery and white supremacy were the cause of the Civil War.”
One such group is the Sons of Confederate Veterans, a Southern heritage organization whose members say state’s rights, not slavery, was the primary motivation for succession. Through a steady stream of website commentaries, blog posts and printed articles, Sons of Confederate Veterans members frequently promote the idea of black support for the Southern Army.
The author of Virginia’s recalled textbook, Joy Masoff, said articles by Sons of Confederate Veterans members helped convince her to include information in the fourth-grade history book that said “thousands” of black Confederate soldiers fought in the war.
Slaves undoubtedly worked for the Confederate troops, especially in the early years before food and supplies were scarce.
Workers like Gregory Perry’s great-great grandfather were brought onto the battlefield to drive horses, cook and even serve as valets. Slaves also were occasionally conscripted from their owners to help work on roads and other infrastructure needed by the army, Smith said.

“African Americans built bridges, erected fortifications, worked on the docks — all kinds of support work to free whites up to go and fight,” he added. “That’s nothing new.”
In the 1920s, 2,807 Southern blacks were approved for pensions authorized for black Confederates. In most states, each applicant was required to report the nature of the work performed and to which unit his “master” had been assigned.
In North Carolina, Sons of Confederate Veterans member Tony Way researched historical records and found that 10 black men from Union County received Confederate pensions. All were listed as having served the Southern Army as guards, servants, cooks and in other supporting roles.
Way proposed a marker on the courthouse square to recognize their contributions. He said he wasn’t trying to make a political statement.
“There are no African American monuments in Monroe County, so, being a Civil War buff, I thought the marker might highlight a unique and un-talked-about part of this region’s history,” Way said. 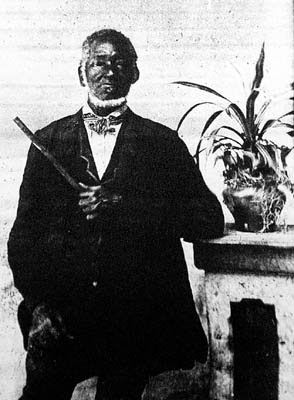 
Jerry Surratt, chairman of the Union County Historical Commission, said the commission voted against the marker mainly because of the existing Confederate veterans’ monument nearby. It bears the titles of local regiments — not individual names as Way wanted.
“If we were going to list the names of those who served from Union County, there could be 1,800 names up there, 500 of whom didn’t return living,” Surratt said.
Earl Ijames, curator of African American and community history at the North Carolina Museum of History in Raleigh, helped Way with his research.
Ijames, who is black, said it is unrealistic to maintain that no people of color took sides against the Union. A seventh-generation North Carolinian, Ijames said some blacks may have pledged allegiance to the Confederates as a means of self-preservation.
This is something Gregory Perry has begun to consider about his ancestor.
“I can only think there must have been something more about this war, something we don’t know about, for him to have had such a connection to the Southern people or to the land,” he said.
Meanwhile, Ed Smith, an American University professor who has spoken widely on the subject, says today’s audiences can’t really gauge the societal, economic and other pressures that played on blacks and whites during slavery.
He said that’s why it is so hard for anyone to imagine that a slave’s Southern identity could have been at odds with his ideas about freedom.
“In today’s world, it’s hard to look back on slavery with any kind of clarity,” Ed Smith says. “Frankly, I think it’s going to be quite messy for the next four years.”

Marlboro Jones, manservant of Confederate captain Randal F. Jones of the 7th Georgia Cavalry, sits for an ambrotype dressed in Confederate uniform. During the Battle of Trevilian Station, Virginia, in June 1864, the captain was mortally wounded and his slave brought him back home to Savannah. The manservant was the basis for a character in the 1898 novel Lyddy: A Tale of the Old South written by Eugenia Jones Bacon.

Courtesy of The Museum of the Confederacy

Sporting badges from a Confederate reunion, three men named Ellis pose for a photographer. The image is part of the Cook collection at the Valentine Richmond History Center, and it was probably made during the United Confederate Veterans’ national reunion that was held in Richmond Virginia in 1907. The two men in uniform wear caps with pins that spell out “CAV,” perhaps a reference to their having served in the Confederate cavalry. The African American man at center, with his arms on the shoulders of the ex-soldiers, shares a common surname with them and perhaps accompanied the men to war as a body servant. The image conveys the Lost Cause point of view that accentuates the role of African Americans as “faithful slaves,” loyal to their masters and the Confederate cause.

How Slavery Shaped America's Oldest And Most Elite Colleges