A former Democratic congressman and leading 2008 supporter of Barack Obama who was often referred to jokingly as ‘the second black President’ has switched his voter registration in preparation for a possible election run as a Republican.

The defection of Artur Davis, 44, Harvard-educated and a one-time rising star in the party who was the first member of Congress outside Illinois to back Obama against Hillary Clinton, is a major symbolic blow to the President.

Perhaps most damaging is Davis’ biting critique of Obama and the way the Democrats have evolved over the past four years. He left the Democratic party last December to become an independent. 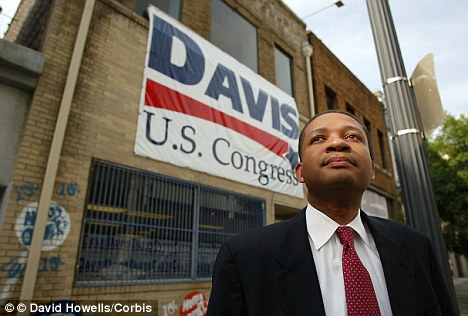 Changing teams: Former Democratic congressman Artur Davis has switched his party registration to Republican in time for his possible reelection campaign in Virginia

Now he is registering in Virginia and has made clear he is now a Republican.

At one time, Davis – like Obama, a Harvard Law graduate – was tipped as a possible Attorney general in the Obama administration.

His dramatic move comes after Mayor Cory Booker of New Jersey, another prominent Democrat identified along with Obama and Davis as part of a new wave of black politicians, slammed the Obama campaign attacks on Mitt Romney’s Bain Capital record as ‘nauseating’. 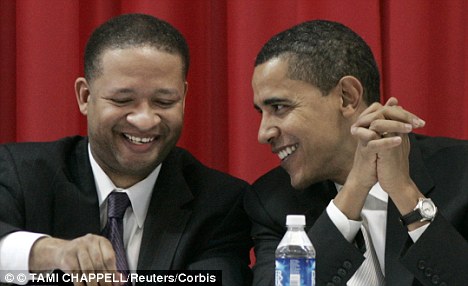 Prior support: Davis, seen in 2007 with the then-Senator Barack Obama, was the first member of congress outside Illinois to support him during his presidential run in 2008

Booker later apologised after the Obama campaign publicly lambasted him with David Axelrod, Obama’s top campaign strategist, describing his comments, quickly made into a Republican ad, him as ‘just wrong’.

Davis left the House of Representatives in 2010 to run for Alabama governor but was defeated in the Democratic primary, a loss that accelerated his disillusionment with his party.

‘Frankly, the symbolism of Barack Obama winning has not given us the substance of a united country‘

In a blog post on Tuesday, he said he was switching his voter registration to Virginia.

In his blog, he took aim at Obama’s agenda and his failure to deliver: ‘I have regularly criticised an agenda that would punish businesses and job creators with more taxes just as they are trying to thrive again.

‘I have taken issue with an administration that has lapsed into a bloc by bloc appeal to group grievances when the country is already too fractured: frankly, the symbolism of Barack Obama winning has not given us the substance of a united country.‘ 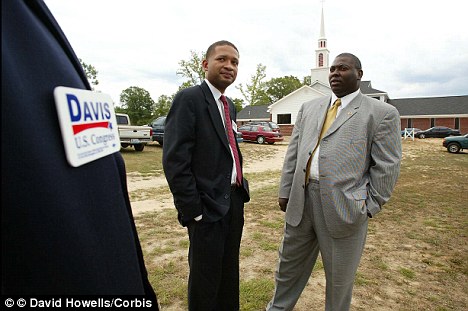 Speaking out: Davis, seen during his 2002 campaign in Alabama, has now turned on the president saying his push to increase taxes will only hurt job creation

The former congressman is understood to be considering challenging Gerry Connolly, a two-term Democrat representing Northern Virginia, just outside Washington, where Davis now works for a law firm. Running against Connolly, however, would be a tough challenge.

Davis portrayed Obama’s Democratic party as having abandoned its more centrist heritage and as dividing America.

‘My personal library is still full of books on John and Robert Kennedy, and I have rarely talked about politics without trying to capture the noble things they stood for.

‘I have also not forgotten that in my early thirties, the Democratic Party managed to engineer the last run of robust growth and expanded social mobility that we have enjoyed; and when the party was doing that work, it felt inclusive, vibrant, and open-minded. But parties change. 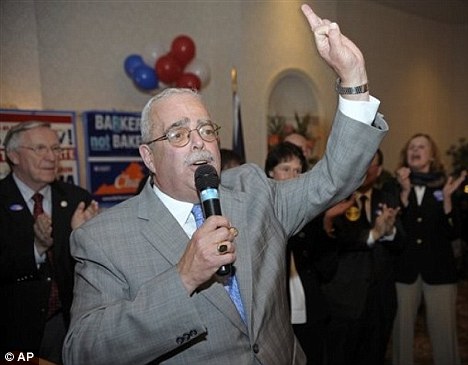 He added that ‘this is not Bill Clinton’s Democratic Party (and he knows that even if he can’t say it)’.

Davis said that he had been encouraged to run for Congress and also the Virginia state legislature.

‘I by no means underestimate the difficulty of putting together a campaign again, especially in a community to which I have no long-standing ties,’ he wrote.

‘I have a mountain of details to learn about this northern slice of Virginia and its aspirations, and given the many times I have advised would-be candidates to have a platform and a reason for serving, as opposed to a desire to hold an office, that learning curve is one I would take seriously.’ 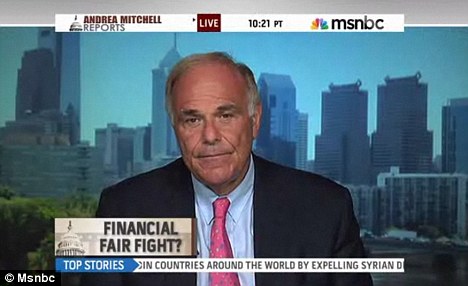 Disappointed: On MSNBC Former Pennsylvania Governor and DNC chairman Ed Rendell said he is neither for against Obama in his upcoming election calling his recent behaviour disappointing

There is growing discontent with Obama and his re-election campaign in some Democrats quarters and an increasing willingness to speak publicly about it.

‘I think they’re very disappointing,’ Rendell, speaking on MSNBC, said when describing the ads that paint Romney as a predatory profiteer who exploited workers and built his fortune on the backs of the poor.

When asked whether he was for or against the Obama campaign, he responded: ‘Neither.’