By VIV BERNSTEIN
Published: March 6, 2013
CHARLOTTE, N.C. — Nascar, which has long struggled to develop minority and female participants, seemed to have a barrier-breaking athlete in its ranks in recent years: Tia Norfleet, a 20-something driver from Georgia. With a savvy marketing campaign, Norfleet garnered attention in several national publications while promoting her accomplishments as the first African-American woman to race in Nascar.
In speaking engagements with students and in news media interviews, Norfleet has for several years portrayed herself as an accomplished driver in the sport. She has sought sponsorships and has a PayPal account on her Web site, which includes articles and videos about her achievements.
Her Web site, Tianorfleet34.com, indicates that she intends to compete in a full schedule this season in Nascar’s Nationwide Series, one rung below the top-tier Sprint Cup series.
But Norfleet is not licensed to compete at that level. In fact, the only sanctioned race that Norfleet has entered, according to the sport’s officials, was a low-level event last year at the Motor Mile Speedway in Radford, Va., where she completed one lap before driving onto pit road and parking her racecar.
The discrepancy between Norfleet’s auto racing accomplishments and her public comments, as well as apparent legal issues revealed in court documents, have drawn objections from racing officials.
“I am uncomfortable with Tia representing herself in the way that she has,” said Marcus Jadotte, Nascar’s vice president for public affairs and multicultural development.
When asked Monday about the nature of her competitive career, Norfleet said: “I’ve been racing in nonsanctioned races before. I’ve been racing forever. For as long as I can remember. I race in nonsanctioned races.” 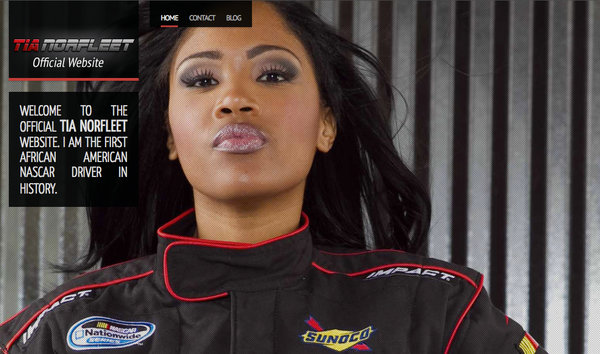 Tia Norfleet in a photo from her Web site. The only sanctioned race she has entered, racing officials said, was a low-level event last year.

For the past four years, Norfleet has purchased a license to race at the lowest level of stock-car racing. There is no vetting process for such a license; individual racetracks must approve drivers for competition.
To move up to a higher level of competition — a regional touring series like the K&N Pro Series East or the K&N Pro Series West — a driver must earn approval from Nascar. Norfleet has not done that yet.
Meanwhile, publications and Web sites like The Washington Post, The Huffington Post and ESPN have heralded her ascent. “Ms. Norfleet is one of thousands of individuals who have purchased licenses in the Late Model Division of our sport,” Jadotte said in an e-mail. “I am uncomfortable with attempts Ms. Norfleet and her representatives have made to forgo the sport’s development process.”
Nascar officials said they were also concerned with questions about Norfleet’s legal record. Public records indicate that Tia Norfleet’s full name is Shauntia Latrice Norfleet, and that she has a criminal record in Virginia and Georgia. (No public records were found with the name Tia Norfleet.) According to her Web site, her hometown is Augusta, Ga.
Court records show that in 2005 and 2009, Norfleet was found guilty of assault and drug-related offenses. Norfleet did not deny having a criminal record.
“People make mistakes in their life and move forward and make a better way,” she said in a telephone interview. “I think things that I’ve done, people make mistakes, as a child, as a teen, and basically, it’s things that you may not be proud of but you move forward and you help others. And they may be in the same situation and you can relate and they can relate to you, and you help them as much as possible.”
Bobby Norfleet, Tia’s father and a former racecar driver, later said that her comments were not an admission that she was involved in a crime. “Somebody’s got something wrong,” he said. “Somebody’s going to eventually have to write a retraction.”
According to public records, Norfleet is 26 years old. Some news reports earlier this year said she was 24. Tia and Bobby Norfleet refused to confirm her birth date.
<nyt_text>

According to a news release distributed by Platinum Sports Entertainment Group, Norfleet is now a good-will ambassador for the National African American Drug Policy Coalition Inc. She was also the safe driving spokeswoman for the SafeTeen Georgia Driving Academy at Atlanta Motor Speedway in May. 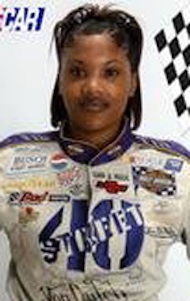 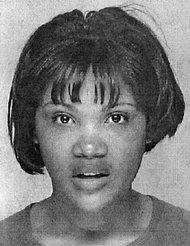 A booking shot of Shauntia Norfleet.

One of the first public mentions of a Tia Norfleet appears to be in a news release in January 2010, a month after Shauntia Norfleet’s conviction in Lincoln County, Ga., for crossing a guard line at a jail with contraband and possession of marijuana.

The release announced Tia Norfleet as “the first and only African-American female driver in Nascar and Arca,” and said she had signed to be represented by Platinum Sports Entertainment Group.

At that time, Norfleet had not raced for Nascar or Arca, another auto racing organization in the United States.

The only sanctioned race that Norfleet entered, according to the sport’s officials, was the late-model stock-car event held at the Motor Mile Speedway in Radford, Va. Norfleet started the first of two Twin 100s races and was credited with completing one lap.

One driver in that field said he was not surprised that Norfleet did not stay in the race for more than a lap. Tommy Lemons Jr., who drove the No. 27 car in that race, said he had watched Norfleet practice the day before and was among several drivers who decided not to go on the racetrack at the same time.

“She was extremely slow, just kind of in the way almost,” Lemons said. “We decided not to go out on the racetrack any time she was out there just to keep from anything possibly happening.”

Jason Grant, marketing manager for Purview Creative Strategy and Design, based in Bridgewater, N.J., built a Web site for Norfleet. He said he used his own company advertisements on the site as “placemats” for potential sponsors. When Grant was informed Tuesday of Norfleet’s past, he pulled his ads from the site.

Norfleet had indicated that she planned to race in an Arca event at Daytona International Speedway last month. But she had not completed an application to race for Arca; had not bought an Arca license; and had not participated in a test at Daytona in December, which was required to race there.

“Our position in the industry is we’re trying to keep that open-door policy for an aspiring driver and we try to err on the side of opportunity,” Arca’s president, Ron Drager, said. Because Norfleet had not completed the evaluation to be allowed to race, he said, “it would be inaccurate for her to say that she’s an Arca driver.”

Norfleet’s Web site indicates that she plans to race a full schedule this season in the Nationwide Series, but she is not licensed to compete at that level.

“My immediate goal is to become a Nationwide driver,” Norfleet said when asked about her plans and the schedule on her site. “And we’re out here every day building my driving skills and everything else so that I can reach that goal this year.”