Rihanna and Beyoncé are world famous, but where are all our dark-skinned sisters? Are their faces not acceptable on film or TV?

This has been a good year for the Hackney-born actor Idris Elba, from playing Luther in the acclaimed TV detective show, to being named eighth in a power-list of Britain’s most influential black people. His performance as Nelson Mandela in Long Walk to Freedom is already picking up Oscar buzz. Elba’s trajectory is a homegrown success story and, as a man of African descent, I am inspired to see another doing so well in the UK and abroad. But it makes me wonder: where are his female counterparts?
There is an undeniable scarcity of black female actors in film and television. Of the female actors that we see, it’s even rarer to see one of a darker skin tone. When British dual-heritage actor Thandie Newton was cast as Olanna, the voluptuous, brown-skinned and beautiful Igbo heroine of the film adaptation of Chimamanda Ngozi Adichie’s novel Half of a Yellow Sun, there was a furore. The 2006 book, which won the Orange prize for fiction, tells the story of the Biafran war. Many saw the casting of Newton as a step in the right direction for Hollywood, which has been notoriously slow to greenlight films featuring black actors in leading roles, but not everyone was happy. An online petition sprang up, demanding the film be recast.
The petitioners wrote: “Thandie Newton is an accomplished and talented actress. However, she is not Igbo, she is not Nigerian, and she does not physically resemble Igbo women in the slightest. This petition is important because we live in a world where mass media sells us the belief that white, and anything close to white, is right, and black is not only wrong, it is unattractive, and undesirable. The casting of Thandie Newton as an Igbo woman is not only false, it helps promote the idea that light skin and curly hair is the only way a black woman can be represented in the media, because that is the only way they are attractive. This casting choice is an abomination to Igboland.”
This reaction seems to highlight a worrying trend throughout the media in which the dark-skinned black woman seems almost non-existent. We rarely see her dancing in R&B videos: she has been replaced as the love interest by her light-skinned or white sisters. We do not even see her in the faces of our black female pop stars. Take Rihanna, Beyoncé and Nicki Minaj, all light-skinned with European features and blond weaves. Even in the world of fashion, the image of the black woman has been all but erased from the catwalk. As Naomi Campbell recently said, opportunities for black models seem scarce. The most successful black female model is now London-born Jourdan Dunn, who has campaigns for Burberry, Calvin Klein, and Victoria’s Secret. Dunn is 5ft 10in, rakishly slender and, most importantly, light-skinned. 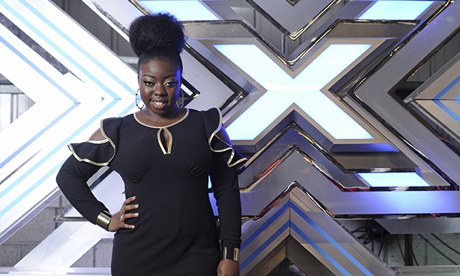 Hannah Barrett on The X Factor: one of the few dark-skinned female artists on primetime TV. Photograph: Jonathan Hordle/Thames/Rex

Where have all our dark-skinned sisters gone? What does it mean that the only acceptable black faces are light-skinned? This is the reality of colourism.
Colourism refers to discrimination based on skin colour. Typically it disadvantages dark-skinned people, and privileges those with lighter skin. Dark Girls, a 2011 documentary by American film-makers Bill Duke and D Channsin Berry, sought to rip the lid off colourism. For more than an hour, dark-skinned black women shared their feelings of rejection, sexual objectification and marginalisation. In one of the more harrowing segments it reported a new version of the 1940s doll experiment byKenneth and Mamie Clark, which had children select a white or a black doll (they typically chose white), and showed how black children had internalised racist ideas. In the updated version, black children favoured light‑skinned dolls over dark-skinned dolls.
It’s not just a theoretical issue. Colourism yields real advantages for people with light skin. A Villanova University study of more than 12,000 African American women imprisoned in North Carolina found that lighter-skinned black women received shorter sentences than their darker-skinned counterparts. Previous research by Stanford psychologist Jennifer Eberhardt found that darker-skinned black defendants were twice as likely as lighter-skinned black defendants to get the death penalty for crimes involving white victims.
Colourism also manifests in the romantic realm. Because fair skin is associated with beauty and status, light-skinned black women are more likely to be married than darker-skinned black women. “We find that the light-skin shade as measured by survey interviewers is associated with about a 15% greater probability of marriage for young black women.” Light skin is so coveted that whitening creams continue to sell well in the US, Asia and Africa. Mexican American women in Arizona, California and Texas have reportedly suffered mercury poisoning after turning to whitening creams to bleach their skin. That skin‑bleaching cosmetics have persisted for decades signals the enduring legacy of colourism.
It is clear that the effects of colourism run deep in our society. I struggled for a whole afternoon to think of a dark-skinned female actor or performer currently on our screens during primetime. The only one I could remember seeing was 16-year-old Hannah Barrett, who has just started her tenure on The X Factor. Hannah, prone to floods of tears, impressed the judges with her mature-sounding soulful tone and she certainly has lots of promise. It will be interesting to see how she deals with the level of scrutiny that comes from being in the public eye. During a recent live show, she sang a note‑perfect rendition of the Christina Aguilera torch song Beautiful. The ever-sage Sharon Osbourne made sure to remind her: “Yes, you are beautiful, you just have to believe it, dear.” Wise words, Sharon.

Black Caucus Leader: We Disagree With Presidents, Even Obama

Zimbabwe’s surprising bid to preserve its colonial past