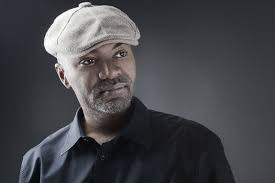 By NELSON GEORGE
Published: February 15, 2013
A black slave is torn apart by dogs as a crowd of white overseers savors the sight and a black bounty hunter watches passively behind shades. A black father makes his little girl crack open a crab with her bare hands then flex her tiny muscles like a pint-size N.F.L. linebacker. A black pilot snorts a line of cocaine after a night of debauchery and, just a few minutes before liftoff, knocks back several miniature bottles of alcohol. A black woman tells President Lincoln that God will guide him as he pushes legislation that will end slavery but not dent notions of white supremacy.
The four films noted here are contenders for a slew of major Oscars: “Django Unchained,” “Beasts of the Southern Wild,” “Flight” and “Lincoln.” In the year America gave its first black president a second term, some of Hollywood’s most celebrated films, all by white directors, dealt with black-white race relations or revolved around black characters, which is rare. For the first time in recent memory race is central to several Oscar conversations. But the black characters’ humanity is hit or miss. These films raise the age-old question of whether white filmmakers are ready to grant black characters agency in their own screen lives.
Looking at these Oscar-nominated films, we should ask: Are black characters given a real back story and real-world motivations? Are they agents of their own destiny or just foils for white characters? Are they too noble to be real? Are they too ghetto to be flesh and blood? Do any of these characters point to a way forward?
TriStar Pictures/Photofest
Denzel Washington in “Glory.”
First a bit of context: Throughout the early decades of the post-civil-rights era black people tended to view their image in media, particularly in movies, through a prism of “positive” or “negative.” These simplistic terms served a kind of Rorschach test of images that could make black folks comfortable or uncomfortable. Denzel Washington as a strong-willed, heroic Union soldier in “Glory”(1989) was considered positive. Denzel Washington as a crooked Los Angeles cop in “Training Day” (2001) was negative. He won Oscars for both, but his corrupt cop was polarizing, since it implicated black treachery, with white indifference, in urban crime.
This dualistic language endured, in part, for generational reasons. People who remembered the racism and paternalism of classic Hollywood movies remained vigilant. Class played a role as well. College-educated audiences, perhaps more sensitive to cinematic subtleties, were more likely to accuse filmmakers, black and white, of negative stereotypes than were working-class viewers. The positive-negative terminology left little room for ambiguity, but since mainstream American cinema rarely afforded black characters complexity, this schematic vision stuck around, especially among older blacks.
A more sophisticated standard for judging a character’s merits has emerged as the most obvious stereotypes have, for the most part, faded and as filmmakers, for better and sometimes worse, have attempted to normalize the black image. In the age of Obama, when a black man is the protagonist in our national narrative, are Hollywood’s fictional characters allowed the same agency in the stories built around them? That’s a fair question to ask of these Oscar contenders.
As Spike Lee, the Hughes Brothers, Julie Dash and John Singleton demonstrated during the brief, resonant black-film boom of the late 1980s and early ‘90s, depicting black characters not as racial symbols but as accessible human beings required creating male and female roles of moral breadth and depth. The legacy of “Do the Right Thing,” “Menace II Society,” “Daughters of the Dust” and others is that audiences can’t respect any thematically ambitious film that delves into race but relies on stick-figure characterizations.

Video by blackandgoldone: Daughters of the Dust Trailer (1991)

Though all these movies are at least 20 years old, they linger in our cinematic culture as standard-bearers for filmmakers. This is particularly true for white directors, writers and producers who venture into this contentious space. (In colorblind roles — think of Will Smith in one of his futuristic ventures — agency is less of an issue. People tend to be more forgiving of the motivations of an actor battling space invaders and rebellious robots.)

Let’s look at Steven Spielberg’s much-lauded “Lincoln.” Despite the film’s two-and-a-half-hour running time, the very first scenes define the role of its black characters. Initially we see black soldiers battling Confederates in muddy, brutal conditions. Dissolve to a railroad station platform with Lincoln sitting on a bench, looking as magnanimous as his statue at the National Mall. Standing below him, looking up, are two black soldiers, a mise en scène that establishes the supporting role blacks play in a film essentially about their path to freedom.

The first soldier, Pvt. Harold Green (Colman Domingo), speaks of the battlefield bravery of blacks in a tone that is quietly proud, yet slightly obsequious. He is interrupted by Cpl. Ira Clark (David Oyelowo), who assertively presses for black officers. This brief moment of tension is broken by two hero-worshiping white soldiers and Lincoln’s humor. The scene ends with Clark walking slowly away while reciting the Gettysburg Address, reminding the president of the promises implicit in his soaring rhetoric. 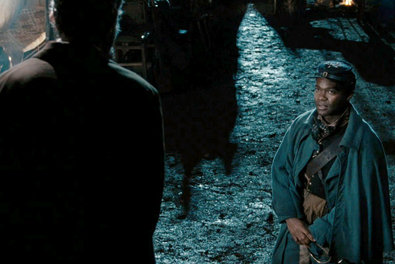 Mr. Spielberg and the screenwriter,Tony Kushner, apparently hope this introduction, showing black soldiers in action and speaking some pointed dialogue, will frame the Congressional debates ahead. The pushy Clark, in a sense, works as a stand-in for the advocacy of abolitionists like Frederick Douglass, whose absence from “Lincoln” looms large in the minds of many black viewers.

Unfortunately that thread is obscured by lengthy, bloodless scenes of political wrangling. Exceptional actors like Stephen McKinley Henderson, as Lincoln’s butler, William Slade, and Gloria Rueben, as Mary Todd Lincoln’s friend and dressmaker, Elizabeth Keckley, mostly stand as mute witnesses to historical acts they are close to, yet have little ability to effect.

A hot topic in the black blogosphere is a scene near the film’s conclusion in which Thaddeus Stevens (Tommy Lee Jones), the longtime Republican abolitionist champion, returns home after the issuing of the Emancipation Proclamation and slides comfortably into bed with Lydia Hamilton Smith (S. Epatha Merkerson), his fair-skinned black housekeeper, suggesting love drove his commitment to ending slavery. If the 23-year relationship of Stevens and Smith was the fire that ignited his antislavery passion, it deserved more screen time than a third-act reveal.

While “Lincoln” depicts its black characters as helpless observers, “Django Unchained” uses pulp fiction tropes to tell the coming of age of a slave turned bounty hunter (Jamie Foxx). Be it spaghetti western, kung fu flick or even “Star Wars,” the hero’s journey is a staple. The director, Quentin Tarantino, uses this template to trace Django’s growth into an avenging lethal weapon.

Putting aside the sometimes hysterical count of a prominent racial epithet, a more fundamental issue for many blacks is Django’s student-teacher relationship with Dr. King Schultz (Christoph Waltz), a dentist turned bounty hunter who trains him in the grisly art of, as Django puts it, “killing white men and getting paid for it.” 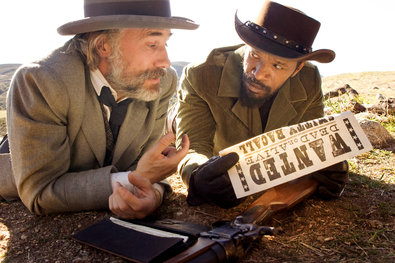 While audiences have enjoyed the film’s revisionist critique of apologist slavery films like “Gone With the Wind” and its celebration of ‘70s exploitation (“Mandingo”), a vocal group of critics sees the Django-Schultz relationship as another sign of black submission to white authority, even though the ex-slave exacts brutal revenge on white oppressors and black sellouts.

The question of Django’s agency is muddled by Mr. Tarantino’s fealty to genre. Lacking, or perhaps denying, the need for strict historical accuracy, “Django” exists both inside the realities of the pre-Civil War South and outside of that history in the fantasyland of Mr. Tarantino’s mind, a contradictory dynamic that both animates “Django” and makes it difficult to take seriously.

Mr. Foxx’s Django is undeterred and implacable in search of his lost wife. But he is not a true human being. Like most action movie heroes he is more an idea of a character, one with no detectable flaws who’s enjoyable to root for. It’s clear that Mr. Tarantino, whose best movies center on people of deeply dubious morality, is more invested in the murderous, funny supporting characters played by Samuel L. Jackson, Leonardo DiCaprio and Mr. Waltz, who was nominated for a best supporting actor Oscar for the role. 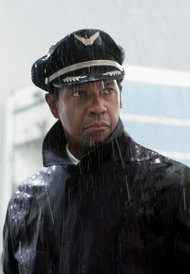 In Robert Zemeckis’s “Flight” Mr. Washington, whose stature and skills made him both the new Sidney Poitier and anxious to break the role-model mold, explores his dark side again. As Whip Whitaker, an alcoholic, coke-snorting, lying but gifted pilot, Mr. Washington adds another reprehensible but redeemable character to a canon that includes his incarcerated basketball genius of “He Got Game” (1998).

Mr. Washington began his career as a positive-image avatar, then masterly steered his career into nuanced roles in which race is not addressed in the plot. Audiences have embraced this strategy, making Mr. Washington one of the only adult movie stars people still reliably pay money to see. In the 2012 Quigley Poll theater owners voted him the No. 1 box office attraction of the year, based on the espionage thriller “Safe House” and “Flight,” for which he received a best actor Oscar nomination.

Whip’s struggle to confront his demons is the engine of “Flight”; he is the agent of his own tortured destiny. But it should be noted that a clever casting choice adds another layer to his story. Having Don Cheadle portray Hugh Lang, the hectoring, cocksure attorney who serves as a superrational yin to Whip’s reckless yang, gives us the pleasure of watching two black peers joust with gusto. Their mutual disdain would play very differently, with a racial edge, if Lang were played by, say, Aaron Eckhart or David Duchovny.

Whip, though beautifully rendered by Mr. Washington, is not the most morally complex black character Oscar voters are grappling with. While Quvenzhané Wallis, now 9, is up for best actress as Hushpuppy in “Beasts of the Southern Wild,” her dance partner in that duet of a film, Dwight Henry, gives a performance of profound hurt, rage and sadness as her father, Wink.

Dying of an unnamed disease (perhaps because he lacks health insurance?) Wink flips between toughening, shielding and ignoring his daughter in preparing her for his inevitable demise. Watching a man clearly better suited to raising a boy than a girl struggle with this responsibility is one of the movie’s chief joys. It is also unsettling to see such a hard-edge view of parenthood. 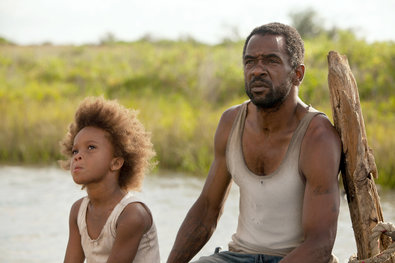 As the center of a dreamy, surreal film that melds fantasy with neo-realism Wink is our connection to the harsh world outside their ramshackle home in a bayou neighborhood called the Bathtub. He is a respected leader in a community of misfits. On the mainland he’s just another poor black man with anger issues. The director, Behn Zeitlin, and Lucy Alibar, co-writer of the screenplay with Mr. Zeitlin, created the platform for a performance that is uncomfortably human, unsentimental and not easily sympathetic.

If judged crudely as positive or negative, Wink’s behavior would be labeled, on the facts of the case, as negative. Which would be silly. Mr. Henry portrays a wounded warrior, a tough-love nurturer and a working-class man who is so rare on screen that, next to Hushpuppy’s brightness, we can barely see his humanity.

Don’t expect to see a lot of characters as tough, dark and loving as Wink anytime soon. Writing and performances this brave are rare, magical occurrences. We can only hope for more.

Nelson George is a filmmaker and the author of “Blackface: Reflections on African Americans and the Movies.”