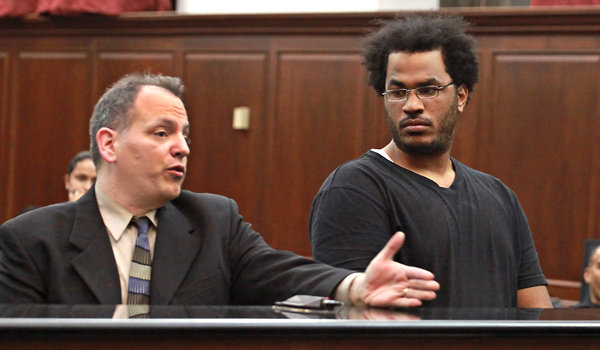 A Manhattan man who became fascinated by the American-born Muslim militant Anwar al-Awlaki was arrested on charges of plotting to build and detonate bombs in New York, city officials announced on Sunday night.

At a hastily called City Hall news conference, Police Commissioner Raymond W. Kelly, who appeared alongside Mayor Michael R. Bloomberg and the Manhattan district attorney, Cyrus R. Vance Jr., said the man, Jose Pimentel, 27, had begun in August to plot a bomb attack. But it was the death of Mr. Awlaki, who was killed in a drone strike in Yemen in September, that refocused his efforts, Mr. Kelly said.

Mr. Kelly said that Mr. Pimentel, a convert to Islam who was also known as Muhammad Yusuf, had been under police surveillance for more than two years and was arrested on Saturday after he had come close to completing at least three bombs.

Holes had been drilled into pipes, sulfur had been scraped off matches, nails were ready to be used as shrapnel, and wires were used to fashion an ignition device, according to a law enforcement official.

Mr. Pimentel planned to test his abilities by detonating mailboxes before embarking on a bombing campaign around New York City, Mr. Kelly said.

“Pimentel talked about killing U.S. military personnel returning home from Iraq and Afghanistan, particularly Marines and Army personnel,” Mr. Kelly said. “He talked about bombing post offices in and around Washington Heights and police cars in New York City, as well as a police station in Bayonne, N.J.

“Once his bombing campaign began, Mr. Pimentel said the public would know that there were mujahideen in the city to fight jihad here.”

Mr. Bloomberg and Mr. Kelly said, however, that Mr. Pimentel was not part of a conspiracy, had no known contacts abroad and, in the mayor’s words, “appears to be a total lone wolf.”

A native of the Dominican Republic and a naturalized American citizen, Mr. Pimentel had spent much of his life in Manhattan, except for five years in Schenectady, N.Y., the authorities said. While upstate, his extremist remarks “made even some like-minded friends nervous,” Mr. Kelly said, noting that Mr. Pimentel considered changing his name to Osama Hussein “to celebrate his heroes.”

Mr. Pimentel spoke about traveling to “Yemen for training before returning to New York to become a martyr in the name of jihad,” Mr. Kelly said. While Mr. Kelly noted that Mr. Pimentel never ended up going to Yemen, at one point Mr. Pimentel had e-mailed Mr. Awlaki in an attempt to open a line of communication. The cleric did not respond, the authorities said.

The intelligence division of the New York Police Department routinely asks smaller departments outside the city for help in identifying would-be terrorists, and it was through this network that the New York police learned of Mr. Pimentel around May 2009, Mr. Kelly said. The Police Department then began doing surveillance on him, the authorities said.

In January 2010, Mr. Pimentel followed his former wife back to New York, officials said, and at some point began maintaining a Web site — www.trueislam1.com — that contained bomb-making discussions taken from Inspire, the English-language magazine published online by Al Qaeda in the Arabian Peninsula, the branch of the terrorist network in Yemen.

Along the way, Mr. Pimentel began making incriminating statements to an informant who was working with the police, investigators said, and those conversations were recorded.

The bomb-making began in earnest in October, with trips to a Home Depot in the Bronx and a 99-cent store in Manhattan during which Mr. Pimentel was under surveillance, according to a criminal complaint. There he purchased a clock, elbow piping and Christmas lights — all bomb-making parts, the complaint states. Mr. Pimentel kept the confidential informant up to date on his progress, and at times the bomb-making sessions took place at the apartment of the confidential informant, the complaint says.

On Saturday, the police videotaped him in the informant’s apartment as he was drilling holes in three pipes, according to the criminal complaint. At that moment, the police, including members of the bomb squad, moved in, arresting him in the apartment on West 147th Street, the authorities said.

“We weren’t going to wait around to figure out what he wanted do with his bombs,” a law enforcement official said. “He was in Harlem about an hour from actually having assembled the bombs,” but had all the “unassembled components ready to go.”

Mr. Pimentel lived with an uncle on West 137th Street, in Hamilton Heights. The uncle said in Spanish that the only recent change he noticed in his nephew was his conversion.

A next-door neighbor, Clara Blood, called the arrest “totally shocking and alarming, and it hits very close to home.”

At his arraignment in Manhattan Criminal Court on Sunday night, Mr. Pimentel, who wore a black T-shirt and baggy pants, was ordered held without bail. An assistant district attorney, Brian Fields, said Mr. Pimentel had been about an hour from completing the construction of his explosive devices when he was arrested.

The case is unusual in that it marks the second time this year that the Police Department and the Manhattan district attorney’s office have brought terrorism-related charges in state court, which in the past have been almost exclusively prosecuted in federal courts.

“We had to act quickly yesterday because he was in fact putting this bomb together, drilling a hole, and it would have been not appropriate for us to let him walk out the door with the bomb,” Mr. Kelly said.

A person who was briefed on the discussions between the Police Department and Justice Department, however, said that the Federal Bureau of Investigation had declined to become involved with the case against Mr. Pimentel because of issues the F.B.I. had with it. The person, who insisted on anonymity, declined to elaborate on what those issues were.

Adam Kaufmann, who heads the investigation division for the district attorney’s office, said, however, that “it was a better state case than federal” because while state law allows for Mr. Pimentel to be charged with a “a conspiracy of one person, the feds cannot charge a unilateral conspiracy.”

An end to the flu? Oral spray 'kills 99.9% of infectious airborne germs'