The aggressive era of stop-and-frisk policing in New York City is, in every sense of the word, on trial: the subject of a high-stakes federal court case, scorching denunciations from civil rights leaders and emotional calls for its dismantlement by liberal lawmakers.

But in a stand that is surprising black leaders and worrying some allies, William C. Thompson Jr., the sole African-American candidate for mayor, is steadfastly unwilling to join the tear-it-down chorus.

Instead, Mr. Thompson is embracing elements of the polarizing crime-fighting strategy and winning praise from an unlikely duo deeply associated with it: Mayor Michael R. Bloomberg and former Mayor Rudolph W. Giuliani.

On Wednesday, Mr. Thompson’s restrained approach paid by far its biggest political dividend when a coalition of unions representing about 100,000 city law enforcement officials voted to endorse his Democratic campaign, making clear that what appealed to its members was his comparatively conservative posture on criminal justice, according to people told of the decision.

But in a city whose racial politics are never far from view, Mr. Thompson’s moderate stance on an issue that has consumed the city’s black and Latino community is inflaming a number of high-profile African-American Democrats, even holding up the endorsement of a party stalwart, the Rev. Al Sharpton.

Mr. Sharpton, who likens opposition to stop-and-frisk tactics to a snowballing social movement, has let Mr. Thompson know that he is displeased with his views on policing and should not assume that black voters will automatically support his candidacy.

“I don’t think it’s wise to be distant from a social movement if you are going to run for mayor of this city, especially as a black candidate,” Mr. Sharpton said in an interview. “I have expressed this to Thompson.”

“This,” Mr. Sharpton added, “is not a marginal issue.” 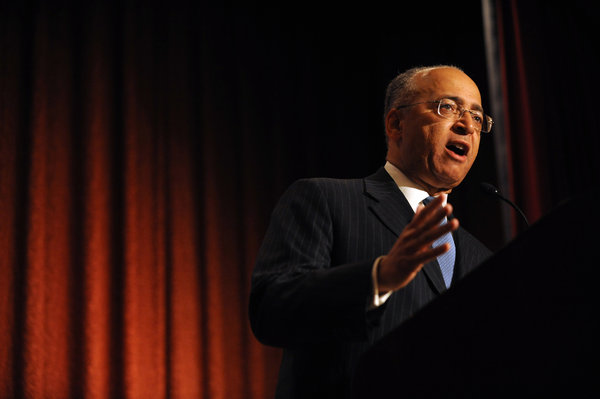 Mr. Thompson’s message, more law-and-order than reactive liberal activist, is upending assumptions about a black candidate for mayor in a city where David N. Dinkins struggled with the perception that he could not control crime and urban decay in the early 1990s.

In an interview, Mr. Thompson spoke of an “overreaction to stop and frisk” that he said glossed over its usefulness as a police tool, even as he forcefully criticized its excesses over the past few years.

As rivals call for the abolition of stop-and-frisk tactics as a routine police procedure, and an independent inspector general to monitor the police, Mr. Thompson said the right way to curb abuses was by asserting his values on the Police Department when he becomes mayor, not through a patchwork of quick fixes that could hamstring him once in office.

His criminal justice platform, he said, “isn’t about running for mayor; it’s about governing.”

Still, Mr. Thompson is now bucking the left wing of his party on three fronts: by pledging to keep stop-and-frisk operations as a crime-fighting tool; proposing an inspector general who operates within the Police Department, rather than outside of it (“I don’t want to create additional bureaucracy,” he said); and opposing a City Council bill that would open state courts to legal claims of racial profiling by the Police Department. (He said it would divert precious city finances to endless legal bills.)

In each case, at least one of his rivals in the mayor’s race — and in some cases, several of them — has staked out territory to his left, forcing Mr. Thompson to defend his Democratic credentials on what are possibly the most emotional questions of the 2013 campaign.

During a candidate forum a few weeks ago, John C. Liu, a Democratic candidate, called on Mr. Thompson to join him in demanding the abolition of stop-and-frisk policing.

The exchange that followed produced the most memorable — and poignantly personal — exchange in the mayor’s race.

“I’m the one who has to worry about my son getting shot on the street,” Mr. Thompson thundered.

In the interview, Mr. Thompson said he was deeply affected watching crime overtake and oppress neighborhoods like Bedford-Stuyvesant, Brooklyn, where he grew up, in the early 1990s.

But his personal experiences cut both ways, simultaneously fueling his fury over what he calls the “misuse and abuse” of the stop-and-frisk policy. Friends and acquaintances have been stopped by police “for no other reason than who you are,” he said.

And Mr. Thompson recalled his discomfort at having to prepare his stepson, then 13, for the likelihood that he could be stopped by the police, a conversation that Mr. Thompson said his own father never had to have with him. “Be calm,” Mr. Thompson counseled.

“Why am I having this conversation with a 13-year-old, who really is just a child?” he recalled thinking to himself.

Though it has won him new political partners, like the United Uniformed Workers of New York, the coalition of 20 law enforcement unions, Mr. Thompson’s measured police plan may have cost him old friends.

The question, for Mr. Thompson, is whether black and Latino voters, who will prove crucial to his Democratic campaign, will share those reservations.

A Quinnipiac University poll, released last month, showed that while 59 percent of white voters approved of the stop-and-frisk tactic, 72 percent of black voters and 58 percent of Latino voters disapproved of it.

Those numbers, combined with the surging rates of police stops in recent years, have left several black leaders scratching their heads over Mr. Thompson’s policies.

Jumaane D. Williams, a city councilman from Brooklyn who has sponsored legislation against stop-and-frisk tactics, bluntly suggested that Mr. Thompson was taking the allegiance of black voters for granted.

“I think he believes that the color of his skin is what’s needed to get to communities of color, rather than standing on the correct substance of issues,” he said.

Mr. Thompson dismissed that claim as “ridiculous.” He added: “I would never take support of black voters for granted. Ever.”

Unlike Mr. Bloomberg, however, he also gives voice to the anger and pain of those who find the tactic dehumanizing.

And, underscoring his desire to reassure those uneasy about a return to lawlessness in post-Bloomberg New York, he has pushed for the hiring of 2,000 additional police officers.

“It’s an extremely tricky balance,” said Representative Hakeem Jeffries, a Democrat from Brooklyn and Queens, who is black and has yet to make an endorsement in the mayor’s race. Mr. Jeffries has repeatedly spoken out against excessive use of stop-and-frisk policing.

“He has to convince one set of New Yorkers that he will continue dramatic declines in crime and keep our city one of the safest in the country,” Mr. Jeffries said, “and on the other hand, he has to convince an aggrieved community of color that the Police Department on his watch will behave in a dramatically different fashion.”

Inside Mr. Thompson’s political operation, there have at times been open disagreements over his policies on policing.

But Mr. Thompson has argued back that every neighborhood deserves the sense of security that has become the new normal in the city’s wealthier precincts.  “I haven’t been shy,” he said, “about making sure that all communities in this city are entitled to safety.”