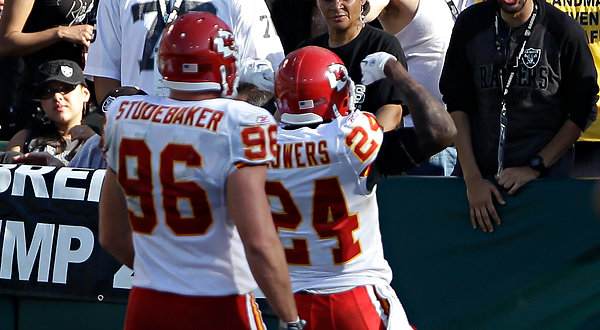 Chiefs cornerback Brandon Flowers (24) was called for a penalty in 2011 after celebrating a touchdown in front of the fans.

A Kansas City Chiefs cornerback returns an interception 58 yards for a touchdown, then flexes his biceps in the end zone with one foot resting on the ball. A Seattle wide receiver makes a throat-slashing gesture after catching a 52-yard pass for a score. A running back for Green Bay lies on his back in the end zone and waves his legs and arms to mime a snow angel after an 80-yard scoring catch. After an 18-yard touchdown catch on Jan. 1, a Buffalo receiver exposes an undershirt that has “Happy New Year” written on it.

Each of these touchdown celebrations last season resulted in a 15-yard penalty for unsportsmanlike conduct. But they had one other commonality: The fouls were called on black players.

It cannot be determined from those few cases and limited data whether race played any role in those penalties for excessive celebration. But a study published in July in The Journal of Experimental Social Psychology by two researchers in psychology at Northwestern University’s Kellogg School of Management tested the question of bias in unsportsmanlike conduct penalties called after touchdowns. The two researchers, Erika V. Hall, a doctoral candidate, and Robert W. Livingston, an associate professor of management and organizations, tried to gather more insight by posing a series of hypothetical situations to a group of people.

They randomly assigned 44 men and women, who were nonblack and qualified as familiar with football after answering a pretest question, to read one of several accounts of a fictional N.F.L. play, each with details that varied slightly. In one version, a wide receiver named Malik Johnson makes a spectacular fingertip catch and sprints into the end zone. Then he spikes the ball in front of a defender named Jake Biermann, goes into his signature touchdown dance, flexes his muscles and waits for a reaction from the crowd. In a second version, everything is the same, except the wide receiver is Jake Biermann and the defender is Malik Johnson.

In other variations, the stories and names are the same but when the wide receiver — either Jake or Malik — scores he calmly flips the ball to the referee and trots to the sideline.

None of the participants were told that the experiment involved race. Instead, they were asked to rate the players for arrogance and to say how much of a salary bonus each should be rewarded with for his catch and score.

Malik and Jake were rated equally for arrogance when they celebrated and for humility when they didn’t. But when it came to rewards and penalties, the differences were stark. Biermann was rewarded about equally whether he celebrated or not. But Johnson incurred a sort of “hubris penalty,” receiving a significantly lower reward if he celebrated with a touchdown dance than if he gave the ball to the official and jogged off the field.

“The same pattern of blacks being punished more than whites seems to hold true both in the N.F.L. and in this experiment,” Livingston said. “I would conclude that the results are generalizable to N.F.L. referees.”

He added: “These football fans reached a conclusion that was based in part on the race of the player, because everything else about the scenarios was identical. All of this happens unconsciously. No one is doing it on purpose.”

But others argue that there is almost certainly not enough data to draw conclusions about whether bias is involved. One expert not involved in the study, Joe Magee, an associate professor of management and organizations at New York University, said it would be a stretch to apply these laboratory findings to the N.F.L. But, he added: “It’s a perfectly adequate and rigorous study. We have different expectations about how people should behave depending on their social or economic group. There’s a backlash when they act in ways that contradict the stereotypes.”

In any case, there has been little chance to test the hypothesis recently. So far this season, no one has been flagged for excessive celebration.