In the wake of the Norway massacre, we should focus our attention on the role racist ideologies have played there.

Felice Blake
Dr Felice Blake is an assistant professor at the University of California, Santa Barbara.

Ingerid S. Straume, vice president of Attac Norge (an independent organisation that seeks to reveal the relationship between global capital and local experiences), argued in a July 29, 2011 column of the newspaper Class Struggle that Norwegian Anders Behring Breivik “did not attack Muslims; he attacked politics. He had a self-proclaimed intention to frighten away young people from participating in political life”.
Breivik is the accused perpetrator of the July 22, 2011 massacre in Oslo, Norway that left eight people dead after a bombing outside government offices, and 69 dead after a shooting rampage at the Labour Party’s summer youth camp on Utøya, an island in the Oslo fjord. At least nine of the shooting victims were people of colour. Straume might deny the connection to race and Islamophobia, but Breivik himself acknowledged the connection between Western politics and race.
In his 1,500-page “manifesto” he writes: “Don’t let multiculturalists define what racism is or isn’t. Keeping an African against his [sic] will in your basement as a slave is racism. Loving your extended family/your ethnic group and fighting for ethnic and/or indigenous rights does not make you a racist; quite the opposite in fact. It makes you a civil rights activist.”
The underlying presumption of Breivik’s thoughts is that White European interests, investments, and identity are what “politics” should protect and serve in a zero-sum game pitted against peoples of other racial and ethnic backgrounds. As it reflects a resurgent racialised European notion of nationalist politics, his perspective – about what racism is or isn’t – remains unchallenged. Instead, many commentators attempt to change the subject away from race and towards youth, immigration, and the economy, as if those issues can be understood without consciousness of their racialised dimensions.
One month after the massacre in Norway, attention now turns to that country’s political parties’ preparation for municipal elections this fall. For all parties, immigration remains a central issue. In a typical “authoritarian populist” inversion of logic, the extreme right wing portrays itself not as the advocates of hate but as the victims of repression, as the race whose rights are under siege.

There is no better antidote to the dust and frustration of living in sub-Saharan Africa than a good dose of Nordic Noir. When I lived in the UK, I consumed almost exclusively African literature and film, but these days – in Ghana and ever seeking contrast – I have spent many a sweaty evening gazing admiringly at Sarah Lund’s woolly jumpers and Saga Noren’s leather trousers, negotiating the apparently prolific spate of serial killings in the Danish and Swedish darkness.
So it was with some excitement that I ventured to Oslo this month. I was born inNorway, but have accumulated little insight since leaving in childhood other than predictable rumours of deep fjords, high taxes, cross-country skiing and blonde eyebrows. Despite my ignorance, I have carried my Norwegian roots around with me – and found them as impractical to package as an open sandwich and as confusing to interpret as a set of Ikea instructions.
There is the endless intrigue at passport control (“You were born where?”), which has made me quite defiant about the perceived impossibility of being a black person from Stavanger (pronounced “Stav-anj-uh” if you are an American immigration officer), and the annoyance of another mispronounced name to add to my list.
So after a lifetime of lugging my open sandwich around, I was curious to see whether I could eat one. Or whether the tendency to devour smoked fish on bread would, like other Scandi stereotypes, be exploded in the crisp Nordic air. 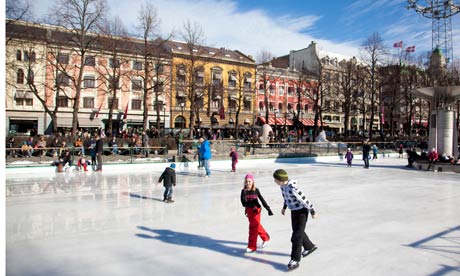 All white in Oslo: skaters on the Spikersuppa rink. Photograph: Jeff Gilbert/Alamy

Mainly I wanted to know what it’s like to be a black Scandinavian. My mother reports being just about the only black person in Norway when we used to live there. She loved it. “I was treated like royalty,” she tells me, and lavished with fresh prawn open sandwiches (no, really). She became a hand model, and although she has lovely hands, there was clearly a bit of a wow factor for Norwegians about seeing a black hand. And I, as a baby, had queues of teenage girls wanting to be my passepiker (a bit like a dog walker for infants) – not necessarily a testament to my outstanding qualities as an infant I’m afraid, but more a matter of novelty.
The opportunity to update my notions of diversity in Norway came courtesy of the Oslo Freedom Forum – an impressive human-rights meeting, a bit like the Davos of freedom fighters. Since there is little the Scandis love as much as human rights, generously heaping some of that bountiful tax revenue on eradicating brutality around the world, it seemed like an appropriate place to compare fact with Norway’s liberal fantasy.
Things have definitely changed in Scandinavia. I should have known something was afoot when I bumped into Neneh Cherry in the loos at Gatwick on my way there. Of course, there are loads of black people in Oslo now. I spoke to a few, who confirmed that being an immigrant in Norway is on the whole an experience of openness, tolerance and fairness – the recent, infamous bout ofmurderous right-wing extremism has simply prompted more naval gazing about the desire to be open, tolerant and fair. The only staring I noticed was at my made-in-Ghana braids.
Liberal and increasingly diverse though it seems, I still detected hints that multiculturalism has not taken complete hold. Despite healthy waves of immigration, a Swedish friend in Oslo was recalling the Swedes’ struggles with racial vocabulary. They have rebranded black people recently, apparently – changing the term from neger, which obviously has unfortunate connotations – to the more politically correct svart, meaning “with an immigrant background”. But black Swedes are svart even if they were born in Sweden. Not sure we would stand for that in London.