African runners may dominate the elite field, but at mass participation level it is rare to see a black runner. Why is this – and what can be done to change it?

In 1980, just 11% of marathon finishers in America were women; last year it was 42%. For half-marathon runners, women are now in the majority (approximately 60%). While those stats are for American runners only, I suspect that the trend is mirrored here in the UK. The number of women taking part in distance running has grown beyond recognition since large participatory marathons started in the 70s and 80s. And let’s not forget, it wasn’t until 1984 that women were even allowed to run the marathon at the Olympics.
But while the gender barrier seems to be tumbling, there seems to be another when it comes to distance racing: black people do not run marathons.
This is all the more surprising considering that nearly all the top marathon runners, both male and female, are African. The one statistic I have found, from Running USA’s biannual National Runner Survey, reveals that only 1.6% of marathon runners in America are African-American, compared with 90% Caucasian, 5.1% Hispanic and 3.9% Asian/Pacific Islander). It is an “opt-in” survey, and so there might be some skewing of results depending on who decides to self-report, but it is the largest national survey of its kind, surveying nearly 12,000 respondents between January and May 2011. 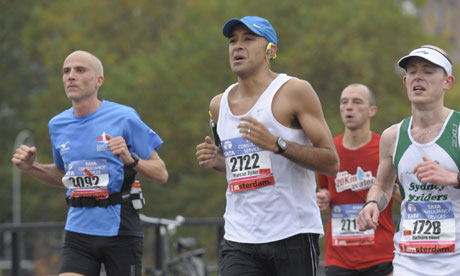 Marcus Ryder feeling very much a cultural minority during the Amsterdam marathon.

It definitely chimes with my own personal experience: I have run two marathons and several smaller distances in the past year, and I would be surprised if even 1% of my fellow runners were black. This includes the Rio de Janeiro marathon – a city with a sizable non-white population.
I am consistently one of only a handful of black people at races, and when I read running blogs and running magazines they are clearly aimed at a well-heeled, middle-class, white demographic. The question is: why? Why aren’t more black people running marathons, half marathons or even 5k fun runs? The barriers to entry are incredibly low. In fact, you could argue that running is the cheapest sport to start, needing only a pair of running shoes, shorts and T-shirt.
I’ve never experienced any racism (overt or otherwise) from my fellow runners. The lack of black runners is definitely not equivalent to the lack of female participation 30 years ago, when the sexism was often overt and crude.
I think the barriers are cultural and self-perpetuating. Black people don’t run marathons because they don’t see people like them at running clubs where they train. Where there are running clubs that make a conscious effort to attract a multicultural membershipm, such as the Run Dem Crew, organised by a black person, black people are disproportionately represented.
Another problem is that black people are often portrayed, and marketed to, as elite athletes. A lot of black people buy into the stereotypes, so it takes a shift in perception to understand that taking part in a race has almost nothing to do with the position you finish or the time you complete it in. This is a way of taking part in sports that has previously not been marketed towards black people. You are definitely not trying to “Be Like Mike” or any other great sports personality when you are running a marathon, you are just trying to be better than the person you were yesterday and the day before that.
But black people do want to run. Every black friend I have tells me how they want to run but always have a reason why they can’t (an old sports injury, lack of free time). Running – and all the sports we do – have a huge cultural dynamic: why pick cricket over basketball? Or basketball over football? Or even chess over poker?
I believe that black participation in running is a sleeping giant. Right now, participation might be only 1%, but given the right running clubs and the right races that could easily change – and hopefully it will.