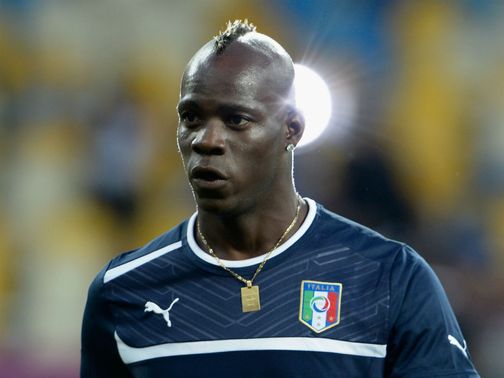 ROME — After two goals Thursday that catapulted Italy to the Euro 2012 final, Italians immediately anointed a new national hero: Mario Balotelli, whose biography neatly encapsulates the changes that have swept Italian society in the past 20 years — as well as its contradictions.

Born in Palermo from Ghanaian parents but raised by an Italian family in Brescia who legally adopted him when he was 18, Balotelli has become an icon of a country still struggling with notions of citizenship and legal rights.

Even as fans and commentators have cited Balotelli as a symbol of Italy’s new multiethnic society, there are some Italians who still believe that nationality is a question of color.

“This young man is called Italy,” the sportswriter Maurizio Crosetti wrote in a front-page article in the Rome daily La Repubblica on Friday. “Because Italy now is also a black man” with a northern Italian accent. He is, Mr. Crosetti wrote, “ a sign of the times.”

As though to confirm his “mammone” street cred, the ultimate manifestation of Balotelli’s Italianness, newspapers and Web sites almost unanimously ran photos of Balotelli hugging his adopted mother after the victory over Germany.

Commentators gushed over his statuesque physique, comparing him to one of the Riace bronzes — the full-size bronzes from the fifth-century B.C. housed in an Italian museum, reputed to be among the epitomes of male beauty (though they are actually Greek, not Roman).

Mr. Balotelli has even been elevated — some would say surpassed — to the ranks of Italy’s Super Marios, alongside Italian Prime Minister Mario Monti, who on Friday wrested concessions from the European Union to stave off speculators, and the much-praised head of the European Central Bank, Mario Draghi.

Yet while he was still playing in Italy, Mr. Balotelli, like other black athletes who play here, was subject to racist episodes. When newspapers reported that he had revealed in June after a visit to Auschwitz that one of his adoptive parents was of Jewish heritage, an Italian extreme right group posted unprintable slurs on its Web site.

“This past year there were 59 racial incidents during the Italian soccer championship, almost all of them linked to color,” said Mauro Valeri, a sociologist and expert in racism in sport. Fines of more than €400,000 were issued, he said. “Even though measures have been implemented to halt the violence, the fact racism persists should make you think.”

Equally telling of Italy’s unresolved issues with immigration has been the resistance among lawmakers to change citizenship legislation, which currently confers birthright citizenship to the children of Italian citizens and not to children born in Italy of foreign parents.

The consequent bureaucracy limits the rights — and aspirations — of non-Italian children living here, including Balotelli, who was unable to play for Italy in the 2008 Olympics because he was still a minor, and so Ghanaian by nationality. There has been much debate over the citizenship laws, and the Italian president, Giorgio Napolitano, has come out in favor of giving children born in Italy citizenship.

Balotelli, incidentally, is not the lone beacon of a changing society. Angelo Ogbonna, whose parents are Nigerian, also plays for the Italian national team.

Valeri, the sociologist, is among those who hope Mr. Balotelli’s visibility will give the citizenship issue new prominence. “Let’s hope we see a Balotelli law,” he said, and soon. “I guess a lot depends on whether Italy wins.”