By RON SOODALTER  May 14, 2013, 12:31 pm
Shortly after the Emancipation Proclamation declared that African-Americans, “of suitable condition, will be received into the armed service of the United States,” the governor of Massachusetts, John Albion Andrew – one of the most aggressively antislavery officials to hold public office during the Civil War – put out a call across the North for men to fill the ranks of an exclusively black volunteer regiment.
The first enlistments took place on May 12, and soon scores of black men from Massachusetts, Pennsylvania, New York, the Midwest states – even Canada – had eagerly signed on. So overwhelming was the response that the governor had to create two regiments, officially designated the 54th and 55th Massachusetts Volunteer Infantry.
Millions of modern-day Americans know the 54th from the 1989 movie “Glory,” which climaxed with that regiment’s gallant, doomed assault on Battery Wagner, on the South Carolina coast. Nearly 300 men of the 54th became casualties, along with their commander, Col. Robert Gould Shaw, in a desperate attempt to seize the approach to Charleston. Failure though it was, the action demonstrated to the North, the South, and the nations of the world that black men could and would fight as gallantly as whites. 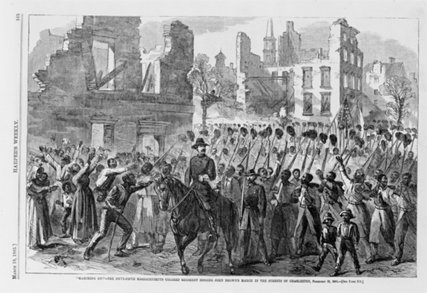 Library of CongressThe 55th Massachusetts marching through Charleston, S.C., in 1865.