America’s bloodiest war could be about to get even bloodier – 150 years after it finished.

Nearly a century and a half after the last shot was fired in America’s Civil War a historian has claimed the body count could be much higher than estimates suggest.

The long-accepted death toll of 620,000 between 1861 and 1865, cited by historians since 1900, was reconsidered by Binghamton University history demographics professor J. David Hacker. 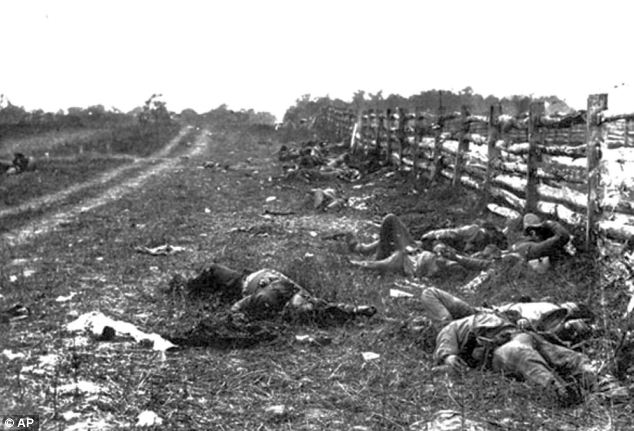 Reconsidered: The bodies of Confederate soldiers killed during the Battle of Antietam lie along Hagerstown Pike, Maryland, on September 18, 1862

In research published in Civil War History, Prof Hacker said he’s uncovered evidence that the toll is actually closer to 750,000.

‘That number just sat there – 620,000 – for a century,’ said Lesley Gordon, a professor at the University of Akron and editor of the journal, a 57-year-old publication considered the pre-eminent publication in its field.

The buzz Prof Hacker’s new estimate has created among academic circles comes in the second year of the nation’s Civil War sesquicentennial.

The event has become a five-year period during which new ways to educate and inform America about its most devastating war.

Fresh exhibits have been presented across the country and living history events that highlight the role Hispanics, blacks and American Indians played in the war. 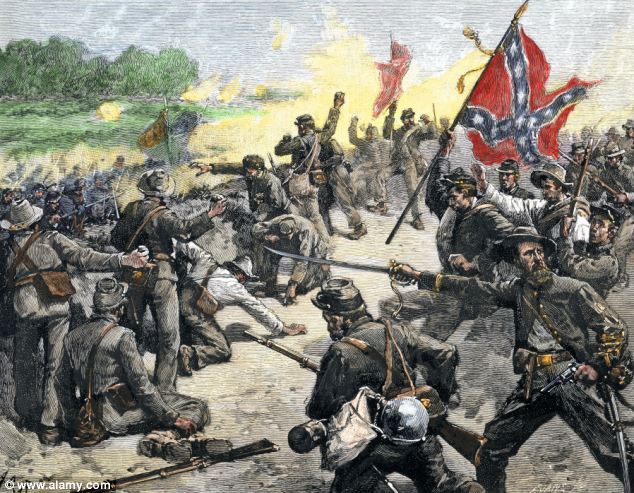 Interest: Painting of the Confederate Louisiana Brigade throwing stones at advancing Federal Army of the Potomac at the second Battle of Bull Run 1862 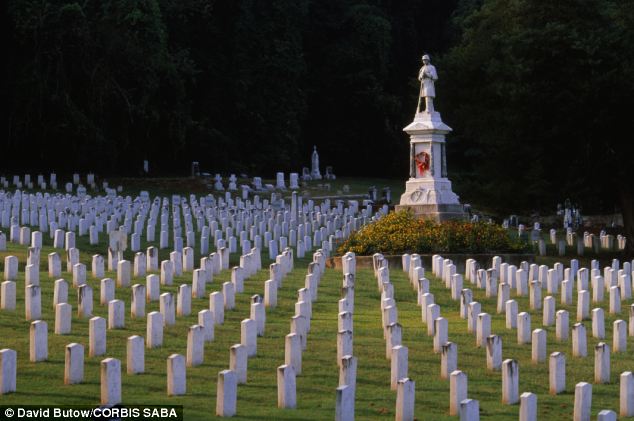 A Confederate cemetery in Vicksburg’s Civil War Site. The long-accepted death toll of 620,000 between 1861 and 1865 is being reassessed 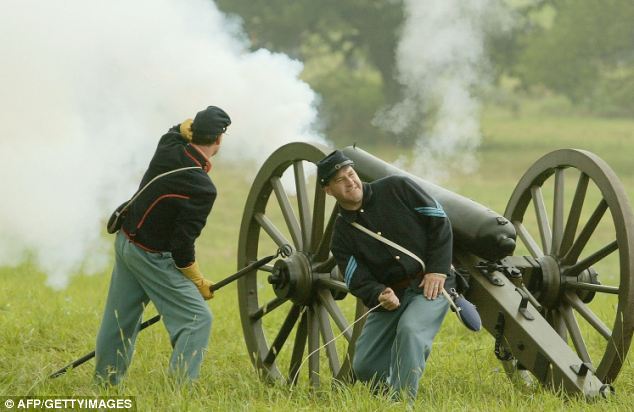 Interest in the Civil War among academics is very high because of the sesquicentennial. Here re-enactors gather at Gettysburg

Among the published material are articles and books that look at guerrilla warfare in the border states, an overlooked battleground where civilian populations often fell victim to the fighting.

Such work represents ‘the new direction’ some are taking in an effort to offer fresh Civil War topics for Americans to examine, Gordon said.

The National Parks Service is featuring some of the lesser-known stories of the Civil War in its commemoration plans. 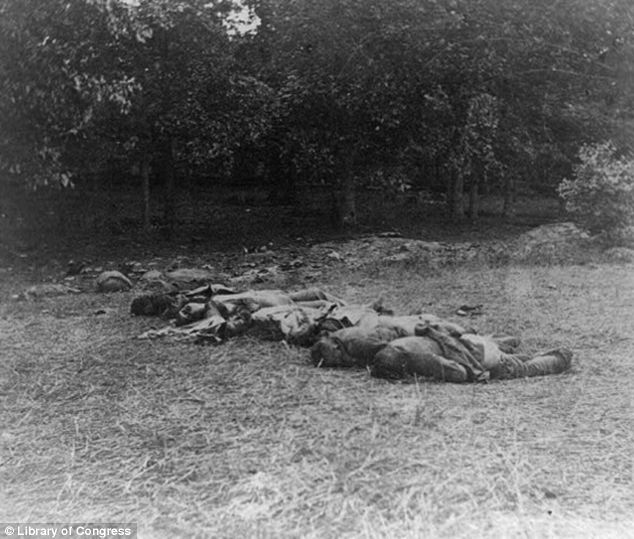 Nearly 150 years after the last fusillade of the Civil War, historians, authors and museum curators are still finding new topics to explore

The parks agency has published a 41-page booklet on the role of the nation’s Latino communities in the war, with another planned from the Native American perspective.

These stories, and those of escaped slaves and free-born blacks who fought for the Union, are an important part of the nation’s history, according to Bob Sutton, chief historian for the National Parks Service.

He pointed to the recent 150th commemoration of the heroics of Robert Smalls, who commandeered a Confederate ammunition steamboat along with several other fellow slaves, picked up their families, sailed out of Charleston’s harbor and surrendered the ship to the Union fleet blockading the South Carolina coast. 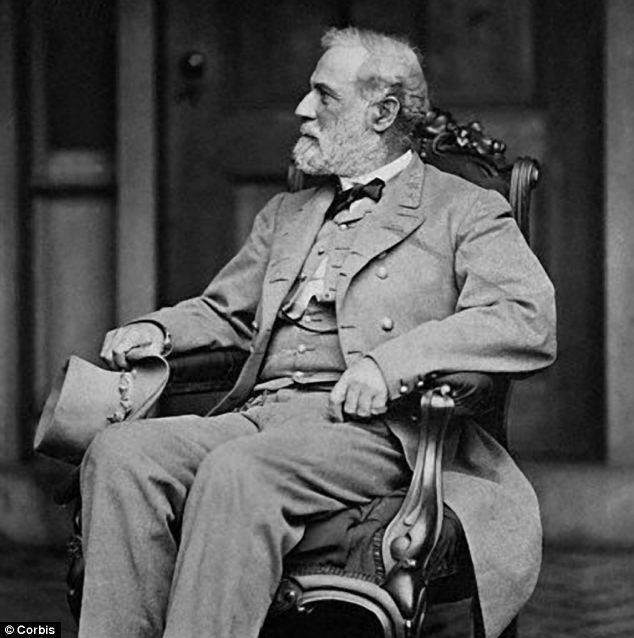 Confederate General Robert E. Lee was commander of the Army of Northern Virginia, the most successful of the Southern armies during the American Civil War

‘The impact of this one incident went well beyond the incident itself,’ said Mr Sutton. ‘It was a major catalyst for the Union to recognise the value to starting to raise black troops. Even that story was downplayed until relatively recently. The impact of 200,000 black soldiers and sailors in the Union war effort was a critical boost.’

As for the death toll, many historians have fully embraced Hacker’s higher number, among them James McPherson, the Pulitzer Prize-winning author of ‘Battle Cry of Freedom.’

‘It drives home even more forcefully the human cost of the Civil War, which was enormous,’ said Mr McPherson, professor emeritus in Princeton University’s history department. ‘And it makes it more understandable why it took the South so long to recover.’

Prof Hacker, an expert in 19th-century demographics, said he was studying the steady decline in United States birthrates when he kept bumping into the Civil War and its impact on the nation’s population growth in the 1800s.

He decided to recalculate the war’s mortality rate for males, using recently digitized Census results from the two national population counts before the war and the two after.

‘If there’s one figure you could use to measure the war’s cost, this is the one statistic,’ said Prof Hacker, an associate professor in the university’s history department. ‘It’s the death toll. Hey, let’s get that one right.’

Prof Hacker didn’t try to differentiate each side’s total deaths, and he doesn’t know how many of the additional 130,000 fatalities were Union and how many were Confederate. His new estimate includes men who died of disease in the years immediately after the war, and men who died of war wounds before the 1870 census. It also includes thousands of civilian men and irregulars who were casualties of widespread guerrilla warfare in Missouri, Kansas and other border states.

Prof Hacker’s work, unlike some other Civil War topics, is being hailed both in the North and in the South.

‘It finally gives substance, with some really fine research, to what some people have been saying for years, that (620,000) was an undercount,’ John Coski, historian at The Museum of the Confederacy in Richmond, Virginia.

Prof Hacker’s new estimate has its share of critics who question some of his methodology, but there’s been no groundswell of opposition from fellow historians, Mr Gordon said.

The Quiet One: 1948 documentary about the rehab of an emotionally disturbed black child