A Blanche Ely High School teacher has been suspended for a week without pay and ordered to attend diversity sensitivity training — punishment for calling a black student a “little chocolate boy” in front of a full classroom.
The school district’s discipline comes more than a year after teacher Leslie Rainer was accused of making the comments. That delay was due to Rainer fighting any potential discipline in court. One of Rainer’s key legal defenses was her own race: as an African-American, Rainer argued that it was merely friendly banter for her to call another black person “chocolate.”
“It’s not a slur, it’s not in any way racist,” Rainer’s attorney, Robert McKee, told School Board members on Monday. 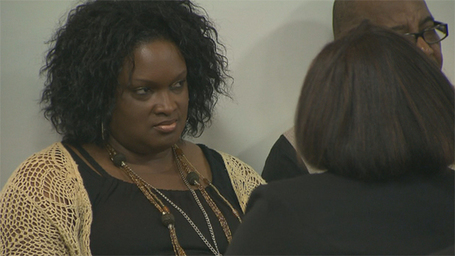 Court documents identify the student as being of both African-American and Caribbean descent. Reached by phone, the student’s grandmother on Monday said the boy’s father hails from the tiny island nation of Dominica. The woman said that her grandson was troubled by the teacher’s “chocolate” comments.
“He didn’t like it,” she said.
School Board members were also unhappy, and voted unanimously Monday to adopt the recommendations of a Tallahassee administrative law judge, which called for a five-day suspension and the mandatory diversity training. That penalty was slightly less severe than the 10-day suspension that School Board members approved a year ago, prior to the court battle.
Rainer, who attended the board meeting, declined to comment.
The school district’s attorney in the court dispute, Carmen Rodriguez, told board members Monday that the “chocolate” comment was hurtful to the student and prompted the entire class to laugh at him.
“He found it offensive, he found it hurtful, and he was so frustrated because he couldn’t respond, because this was a teacher,” Rodriguez said.
Countered Rainer’s attorney: “They weren’t laughing at him; they were laughing with him.”
School Board members said little when voting to suspend Rainer, who could still opt to further appeal the case in court. The Broward Teachers Union has been paying the attorneys fees associated with Rainer’s dispute.
Rainer called the student “chocolate” several times on that particular day, according to court documents. It began when Rainer, in an attempt to warn him to behave in class, told him, “You’ve got one time, chocolate.” The student secretly recorded that exchange on a portable electronic device he brought to school.
“He was frustrated at what was a pattern of treatment of him,” Rodriguez said. “And he was confident that no one would believe him.”
After his device stopped recording, Rainer called him “a little chocolate boy” and “the dark chocolate nobody likes to eat.”
This is not Rainer’s first high-profile disciplinary case. In 2010, she and another Ely teacher made headlines after they were accused of dousing holy water on a fellow teacher at the school who was an avowed atheist. Though initially removed from the classroom in that case, Rainer was later cleared of any wrongdoing and returned to teaching.
Rainer was not removed from the classroom over her use of the word “chocolate,” her attorney said.
During the court battle over that word, Rainer convinced Tallahassee judge Claude Arrington that she should not face discipline for a separate racially charged statement that had been attributed to her. Three Ely students complained in writing that Rainer told Haitian-American students, “I wish they would put you in a boat and send you back where you came from.”
Arrington, however, found that there was not “competent evidence” that Rainer made the statement.
After Monday’s vote to suspend Rainer, her attorney insisted that the entire “chocolate” remark has been misconstrued. McKee said it was the student who first uttered “chocolate” that day, as he noticed Rainer had chocolate on her desk, and he called his teacher “fat chocolate” in an apparent reference to her weight. Rainer simply responded by telling the student that he, too, was “chocolate,” McKee said.
Ultimately, McKee said the student’s entire complaint was retribution for a failing grade he received in the class. While McKee insisted “chocolate” was not a slur in this case, he said it could “more likely” have been considered discriminatory had it been uttered by a white teacher who was addressing a black student.
Superintendent Robert Runcie, who is black, said “it’s not even the term itself, it’s the context in how a term is used, that determines whether it’s derogatory or not.”
In this case, Runcie said there was enough evidence to show that the teacher’s comments were deserving of punishment.