The Civil War era revolutionized the still-nascent game of baseball in America – and not just for whites. During the war black baseball clubs increased; in the postwar period they sought recognition and equal treatment by white clubs and state and national baseball associations. But as in so many parts of national life, those achievements were ultimately limited and soon foreshortened: While black players gained respect from some members of the ball-playing fraternity, racist stereotypes, discrimination and segregation barred them from achieving equality on America’s diamonds.

Black ballplayers shared in the baseball mania that began in the 1840s in Manhattan and Brooklyn and then spread, during the late 1850s and early 1860s, to dozens of cities and towns. During these years most Northern blacks were impoverished, but a few of the more privileged could afford the time and expense of baseball. African-Americans founded their own clubs from New York to New Orleans. Most of these clubs recruited members from the upper ranks of black society, especially artisans, shopkeepers, clerks and teachers.

The start of the Civil War disrupted ball playing by both whites and blacks, but the following year brought a baseball revival. But if baseball playing by blacks increased, so did discrimination against them. Newspaper reporters used racist stereotypes to describe blacks playing baseball: On Oct. 17, 1862, The Brooklyn Daily Eagle published a brief account of a match between the Unknowns and the Monitors. Its headline introduced the contest as a novelty: “A New Sensation in Baseball Circles – Sambo as a Ball-Player and Dinah as an Emulator.” The reporter observed that everyone in the large crowd was “as black as the ace of spades.” 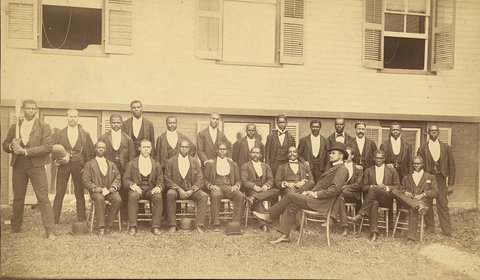 A black baseball team in Danbury, Conn. in 1870.Credit Library of Congress

But the report also gives some clues about the history and scope of black baseball. The reporter’s comment that the spectators included “a number of old and well known players, who seemed to enjoy the game more heartily than if they had been the players themselves,” suggests that baseball had long been a familiar pastime in African-American communities. He added, “The assemblage included women and children: Dinah, all eyes, was there to applaud. … All appeared to have a very jolly time, and the little piccaninnies laughed with the rest.”

Before, during and after the Civil War black baseball was inextricably linked to the campaign for African-American civil and political rights. On July 4, 1859, Joshua Giddings, a white antislavery Republican congressman from Ohio, showed his support for desegregation and equality in baseball by playing in a game with African-Americans. During and after the war members of Philadelphia’s Pythian Base Ball Club (an elite African-American association) were activists in local and state campaigns for black equal opportunity. In 1863 the club’s secretary, Jacob C. White Jr., and the shortstop and captain of its first nine, Octavius V. Catto, served on a committee that recruited soldiers for the Union Army and joined a local African-American militia. During the late 1860s Catto campaigned for the desegregation of Philadelphia’s streetcars and for blacks’ right to vote. After voting on Election Day of 1871, he encountered Frank Kelly, a Democratic Party supporter; the two got into a fight, and Kelly shot and killed Catto.

In 1859, in Rochester, Frederick Douglass Jr., son of the renowned abolitionist, played baseball with the integrated Charter Oak Juniors; after the war he was one of the founders of the Alerts Base Ball Club of Washington. Another son, Charles Douglass, third baseman for the Alerts, spent three years with the Freedman’s Bureau before earning a position as a clerk in the Treasury Department. In 1869 he joined Washington’s Mutual club and became its corresponding secretary. In August of that year, the Mutuals (with Charles Douglass on its first nine), headed north for a tour of upstate New York towns that had provided safe houses on the Underground Railroad.

The 13th, 14th and 15th Amendments, ratified after the war, redefined state and federal citizenship and extended civil and political rights, but they included no provisions for equality in private, voluntary activities. Nevertheless, officers of the leading black clubs of Brooklyn, New York City, Philadelphia and Washington sought equal treatment by the white ball-playing fraternity. Some of them were on good terms with white club officials and frequently obtained permission to use their grounds for feature contests. White umpires sometimes officiated at their games. The Pythians enjoyed harmonious relations with the officers of the city’s powerful Athletics Base Ball Club, who gave them permission to use their field for major matches.

All of the premier white clubs that competed for unofficial state and national championships drew the line at interracial competition; according to The Spirit of the Times of Wilkes-Barre, Pa., the Athletics “would have nothing to do with the dark votaries of the bat and ball.” (A few lesser-known white teams did, however, play black teams.) Exceptions included an 1869 match arranged by Col. Thomas Fitzgerald, editor of another local paper, The City Item. The historic encounter attracted a large crowd, who watched the Philadelphia Olympics rout the Pythians, 44-23. The Spirit praised the experiment, declaring that “old-time prejudices are melting away in this country.” It noted that interracial sporting contests were common in England and other countries, adding, “It is not considered outside our own territory a lessening of dignity nor in the least disparaging to white men that they contend with blacks.” That journal hoped that “now that the prejudice has been broken through here, it will be entirely swept away.”

A few weeks later the Pythians defeated The City Item’s first nine, 27-17, at the Athletics’ ball field. In September the Washington Olympics manhandled the black Alerts of that city on the grounds of the Washington Nationals, 56-4, in front of a large assembly of men and women of both races, including federal government officials. The Brooklyn Eagle observed that the game provided:

A striking illustration of the social change of the last eight years. … Until now when a question of color has arisen, it has been solely on a claim of equal civil and political rights for the negro. … It is not a political or civil right or a privilege of citizenship that a colored base ball club shall be permitted to challenge a white base ball club, and that the challenge shall be accepted. It is purely a voluntary matter, having nothing to do with any law of Congress or amendment to the Constitution. The peaceful way in which this new war of races is carried on is significant. How long is it since such a game as that proposed to be played to-day would have provoked a riot?

In September 1870 in Boston, a white club and a black club, both called the Resolutes, competed for the right to use that name. The “colored” Resolutes triumphed, 25-15. The New York Clipper described the outcome as a victory for the “sons of Ham, who fought nobly for their cherished title, out-playing their fair-faced friends at every point in the game, especially in the field.”
Despite these occasional interracial matches, white baseball clubs excluded black clubs from participation in tournaments and membership in state and national baseball associations. The sponsors of an 1870 Chicago amateur competition barred that city’s Blue Stockings Base Ball Club, an African-American organization composed mainly of hotel and restaurant waiters. The Blue Stockings thought that the white clubs feared the humiliation of losing to a black nine. The Chicago Tribune denied that allegation, but conceded that the white teams included some young men of high social standing who “were not disposed to burlesque the tournament by the admission of a colored club of inferior capacity, even though the gate receipts should suffer thereby.”

State meetings followed the same segregationist policy. In the fall of 1867 the Pythians sent White to Harrisburg to present the club’s credentials to the Pennsylvania State Association of Base Ball Players. He reported to the members that “whilst all expressed sympathy for our club, a few only … expressed a willingness to vote for our admission … numbers of the others openly said that they would in justice to the opinion of the clubs they represented be compelled, tho against their personal feelings, to vote against our admission.” Supporters advocated a discreet withdrawal to avoid a humiliating rejection by ballot, and White reluctantly concurred. Similarly, in 1870 the New York State Base Ball Association approved a motion that if any of the clubs admitted were found to be composed of people of color, their association membership would be voided. The Clipper objected and advised black clubs to organize “a National organization of their own.”

The Pythians faced the same resistance at the national level. In December 1867 they applied for admission to the National Association of Base Ball Players. Its nominating committee “unanimously reported against the admission of any club which may be composed of one or two colored persons.” It added, “If colored clubs were admitted there would be in all probability some division of feeling whereas, by excluding them no injury could result to anybody, and the possibility of any rupture being created on political grounds would be avoided.”

By 1870 baseball was widely recognized as America’s national pastime – and was, like much of the national culture, tightly segregated. While a few African-American ballplayers joined professional clubs during the 1880s, another six decades passed before Jackie Robinson broke the color barrier and revived the campaign to achieve equal opportunity on America’s diamonds.