By RANDAL C. ARCHIBOLD
Published: March 23, 2013
COLÓN, Panama — On one end of the Panama Canal, the nation’s capital gleams with new skyscrapers; a subway, the first in Central America, is under construction; and new malls and restaurants fill with patrons. The city fancies itself a mini-Dubai on the Pacific.
Forty miles away on the other end of the canal, in the city of Colón by the Caribbean, rotting buildings collapse, sewage runs in alleyways, water service is jury-rigged, and crime and despair have sent protesters into the streets. Recently, Hollywood filmmakers made Colón, Panama’s second-largest city, a stand-in for Haiti, the poorest country in the hemisphere.
Panama is booming, with an average economic growth of 9 percent in the past five years, the highest in Latin America. Banking and financial services and big public works projects like the subway and multibillion-dollar expansion of the canal have fed the good fortune.
Panama City, the capital, has the tallest building in Latin America, a 70-story Trump hotel and condo tower, and its skyscraper forest reflects the rush of foreign investment, real estate speculation, well-heeled foreign transplants and, American officials have said, some measure of drug money. 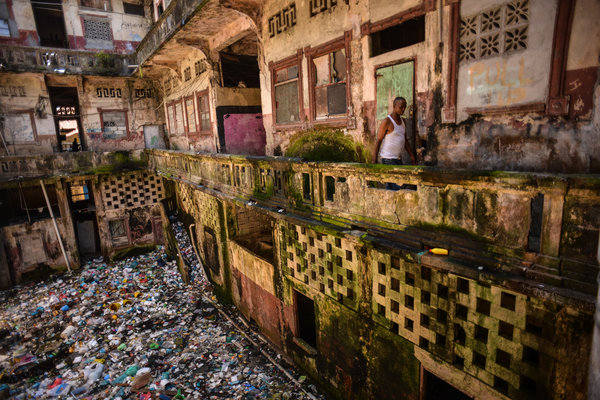 Meridith Kohut for The New York Times—–The Wilcox building, once an architectural landmark in Colón, Panama, is now condemned.

But Panama can also lay claim to some of the starkest disparities of wealth in Latin America, according to the World Bank, and the persistent poverty in Colón, an hour’s drive from the symbols of wealth in Panama City, remains a glaring, festering example inflaming friction here.
Colón, wedged between a busy port and a handsome cruise ship terminal, is a crowded, cacophonous city of 220,000, with street after street of faded colonial facades and concrete-block buildings with peeling paint and weeds growing out of some upper floors.
“There are hardly any jobs here,” said Orlando Ayaza, 29, who works occasionally at the dock. “Not ones with regular salary and benefits that we need here.” He has a two-inch scar on his face that he attributes to a policeman’s baton during unrest here last year.
When asked why he does not move to Panama City, he touched the dark skin on his arm. “They see this, and you say you are from Colón, and they say, no way,” he said. “They think we are all thieves there.”
Colón is predominantly black, whereas Panama City’s population is more of European descent, and many residents and analysts say they believe that racial discrimination has contributed to Colón’s stagnation.
Such disparities are growing starker in rising economies like Peru, Brazil and Ecuador, said Ronn Pineo, a senior research fellow at the Council on Hemispheric Affairs who studies economic change in Latin America.
“Not every urban area has gone along with the growth,” Mr. Pineo said. “And if there is any kind of racial divide, it is hard for affluence to cross, with the poorer area tending to be one color.”
Mr. Pineo said he recently visited Colón and found it “really depressing.” 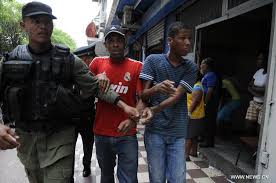 Colón used to shine. In the early 1900s, during the construction of the canal, and after, it blossomed with theaters, clubs, restaurants and finely manicured boulevards. Old-timers recall distinguished visitors like Albert Einstein.
West Indian immigrants surged in, finding jobs at the canal and in American military instillations because they spoke English. But even then, discrimination was a given, with the black West Indians paid at a far lower rate — silver roll versus gold roll, in the vernacular of the time — than white workers.
“Racial exclusion has been a burden on the development of public policy related to black Panamanians in general and Colón in particular,” said Jorge Luis Macías Fonseca, a professor of history at the University of Panama in Colón.
But as Panama City grew and modernized in the post-World War II era, Colón’s luster wore off. The reduction and ultimate closing of American military bases with the canal’s transfer to Panama in 1999 accelerated Colón’s tailspin. Crime and poverty swelled, and middle-class strivers moved to the suburbs, Panama City or abroad.
Colón’s duty-free trade zone, the largest in the Western Hemisphere, has done little to lift the town’s fortunes. Recent development, including a hotel, an upgrade to an airport and a cruise ship dock that allows visitors to shop without entering the city’s squalor, have benefited mostly the businesses in the zone, long a source of friction.
Surse Pierpoint, a vice president of the free-trade-zone business association, said the central government receives $100 million in annual revenue from the zone and spends it as it pleases. He said he did not know how many of the zone’s 30,000 employees live in Colón, but acknowledged that many come from the suburbs and from Panama City.
“The free zone was never designed to carry the fate of Colón,” Mr. Pierpoint said, suggesting that it would take “out of the box thinking” from the government, residents, businesses and others to revive the city’s fortunes.
Last October, there were protests when President Ricardo Martinelli, a supermarket tycoon who has made business development a centerpiece of his term, pushed through a law allowing the sale of state land next to the free zone. Residents interpreted the move as a prelude to expanding the zone and displacing them, and several people died in the unrest.
Mr. Martinelli has since backed off the idea, and this year he began a dialogue with Colón residents, who presented a 33-point list of demands including new housing, jobs and an end to the city’s perennial flooding, sewage seepage and chronic lack of potable water. Just last week, several schools were closed in and around the city because of problems at a treatment plant. Spider webs of plastic tubing and wires hang from buildings, signs of improvised water and power connections.
The dialogue hit an impasse in January, said Edgardo Voitier, the president of the Broad Front for Colón, a group of residents that has held more protests. A main sticking point, he said, was the government’s refusal to guarantee that the proceeds of the land sale would stay in Colón.
Mr. Martinelli’s office did not respond to messages seeking comment.
The government has argued that projects like a new highway connecting Panama and Colón, the expansion of the canal, construction of a new hospital in Colón and other public works have reduced unemployment and poverty. This month, the government announced a $9 million project to rehabilitate Colón’s seaside park.
But Mr. Voitier dismissed such projects as sources of only temporary employment that would do little for the large number of people with informal jobs.
Some Colón boosters have mustered their own piecemeal efforts, tired of waiting for a government rescue. Kurt Dillon, an architect and urban planner, has led a coalition to save and restore some of the crumbling buildings in the city’s historic core, recently drawing dozens of preservationists to write a plan with the help of the World Monuments Fund, an independent nonprofit group. “Civil society has to get things done here,” he said.
Despite the lures of Panama City, many residents have no interest in abandoning a place that is home.
“If we all go to Panama City, what’s left here?” said Alma Franklin, 25. She has worked at fast food stores and struggles to feed her three children, but has no faith that the government will help her. “This country,” she said, “would prefer to forget Colón.”

Revolutionary Language: More extremist groups since Obama has been President