By DOUGLAS MARTIN
Published: March 28, 2013
Bob Teague, who joined WNBC-TV in New York in 1963 as one of the city’s first black television journalists and went on to work as a reporter, anchorman and producer for more than three decades, died on Thursday in New Brunswick, N.J. He was 84.
The cause was T-cell lymphoma, his wife, Jan, said.
Mr. Teague established a reputation for finding smart, topical stories and delivering them with sophistication. Though he later criticized TV news as superficial and too focused on the appearance of reporters and anchors, his own good looks and modulated voice were believed to have helped his longevity in the business.
Mr. Teague followed in the footsteps of Mal Goode, who became the first black network TV reporter in 1962. Mr. Goode was assigned to the ABC News United Nations bureau because network executives feared his presence in the main studio would be too disruptive, TV Guide reported. WNBC, the NBC-owned station in New York, hired Mr. Teague, a seasoned newspaper reporter, the next year. As racial tensions mounted in the 1960s, he was often sent into minority neighborhoods. In July 1963, he was a principal correspondent for “Harlem: Test for the North,” an hourlong network program prepared after riots broke out in the neighborhood. 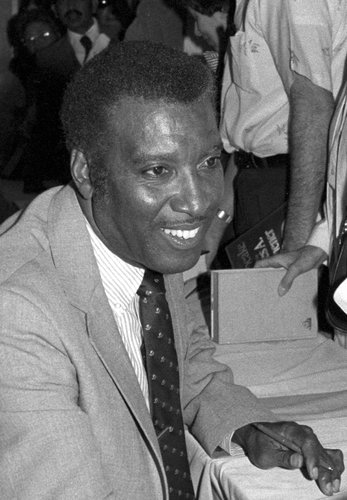 “They felt black reporters would be invulnerable in a riot,” Mr. Teague said in an interview with The Associated Press in 1981. They were not, but he and others proved themselves to be good reporters. He won praise in September 1963 for his first-person report about protesting racial injustice on a picket line.
Just two years after being hired, Mr. Teague was given his own weekly program, “Sunday Afternoon Report.” He also became a frequent replacement on NBC network news and sports programs.
But even as he carved a niche at NBC, including occasional service as anchor, he grew disillusioned with many aspects of the TV news business. In his 1982 book, “Live and Off-Color: News Biz,” he complained that executives’ lust for ratings led them to prefer spectacle over serious news.
“A newscast is not supposed to be just another vehicle for peddling underarm deodorants,” he wrote. “The public needs to know.”
He criticized the major stations’ practice of scheduling their news programs at the same time of day, saying that by doing so they were all essentially providing the same information. He suggested that each channel present the news in a separate time slot. The slots could then by rotated so that all would get access to the most popular times.
Robert Lewis Teague was born in Milwaukee on Jan. 2, 1929, to a mechanic and a maid. He was a star football player at the University of Wisconsin, winning all-Big 10 honors. A journalism major, he passed up offers from four professional football teams to become a reporter for The Milwaukee Journal. He joined the Army in 1952.
In 1956, he moved to New York and found work as a radio news writer for CBS. He soon joined The New York Times as a sports copy editor and went on to cover major sporting events as a reporter.
He left The Times for the NBC job.
In 1968, he published “Letters to a Black Boy,” written in the form of letters to his 1-year-old son, Adam, many about race. The letters were meant to be read when Adam was 13.
At the time he wrote the book, Mr. Teague’s views were growing more conservative. “Government handouts constitute the most damaging assault on black pride and dignity since the founding of the Ku Klux Klan,” he wrote. He generally supported conservative candidates, including Herman Cain for the Republican presidential nomination in 2012. He retired from NBC in 1991.
Mr. Teague lived in Monmouth Junction, N.J. His first marriage, to the dancer Matt Turney, ended in divorce. In addition to his wife, the former Jan Grisingher, he is survived by his son and three grandchildren.
The changing public response to Mr. Teague and others in the first wave of black television journalists was suggested in a letter he received that he described in an article in The New York Times Magazine.
“When you first began broadcasting the news on television, I watched you every night, but I realize now, years later, that I was so conscious of the fact that you were black that I didn’t hear a word you said about the news,” it read.
“Now, I am happy to say, I still watch you every night, but only because you are a damn good newscaster.”