Dr Marlize Lombard, a researcher and lecturer in Anthropology at the University of Johannesburg (UJ), worked with a team of South African researchers and scientists under the leadership of Prof Lyn Wadley(University of the Witwatersrand (Wits)), who have unearthed 64, 000 year-old “stone tools”, believed to be the earliest direct evidence of human-made stone-tipped arrows. A bone point, that could have been an arrow tip was also excavated from the site and published in 2008 by Lucinda Backwell and colleagues from Wits.

The arrow heads were excavated from layers of very old sediment in Sibudu Cave, a sandstone cliff cave in northern KwaZulu-Natal, South Africa. Closer inspection of the stone tools revealed remnants of blood, bone and other use-traces, that provided clues about how it were used.

According to Lombard the shape of the geometric pieces indicated where it had been impacted and damaged, and how they were hafted. “ This showed that the pieces were very likely to have been the tips of projectiles – rather than sharp points on the end of hand-held spears,” says Lombard.
The arrow heads also contained traces of glue – plant-based resin that the scientists think was used to fasten them onto a wooden or reed shaft.
“The presence of glue implies that people were able to produce composite tools – tools where different elements produced from different materials are glued together to make a single artefact,” says Lombard.
According to Professor Larry Barham from the University of Liverpool “This is an indicator of a cognitively demanding behaviour.”
The discovery, together with other evidence, pushes back the development of “bow and arrow technology” by at least 20,000 years.
The team’s findings were published, this week, in the journal Antiquity 84:635-648.
Ancient engineering
Researchers are interested in early evidence of bows and arrows, as this type of weapons engineering could indicate technological and cognitive abilities of humans living at that time.
The researchers wrote in their findings paper: “Hunting with a bow and arrow requires intricate multi-staged planning, material collection and tool preparation and implies a range of innovative social and communication skills.”
Lombard explained that her ultimate aim was to explore the “big question”: When did we start to think in the same way that we do now?”
“Together with additional evidence from Sibudu produced by Prof Wadley and her team, and other South African sites such as Blombos, under the direction of Prof Chris Henshilwood, we are becoming more and more confident that 60-70,000 years ago, in Southern Africa, people were behaving, on a cognitive level, very similarly to us.”
Professor Chris Stringer from the Natural History Museum in London said the work added to the view that modern humans in Africa 60,000 years ago had begun to hunt in a “new way”.
Neanderthals and other early humans, he explained, were likely to have been “ambush predators”, who needed to get close to their prey in order to dispatch them.
Professor Stringer said: “This work further extends the advanced behaviours inferred for early modern people in Africa. But the long gaps in the subsequent record of bows and arrows may mean that regular use of these weapons did not come until much later.”
“Indeed, the concept of bows and arrows may even have had to be reinvented many millennia [later].” 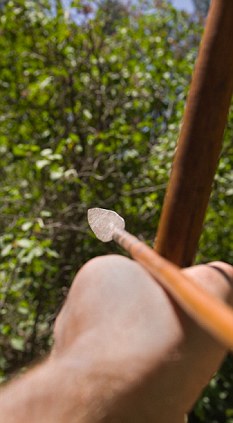 Human beings were able to create tools around 2.5 million years ago – but we first made bows and arrows 64,000 years ago

It took more than two million years to create the bow and arrow after man started making tools.

Human beings were able to create tools around 2.5 million years ago – but we first made bows and arrows 64,000 years ago.
The invention of the weapons was a huge leap for our ancestors, enabling them to hunt far more effectively.

Researchers reconstructed the process by which our ancestors invented bows – and found that the ‘giant leap’ in our history only occurred relatively recently.
Other primates such as chimps are able to use tools, but complex processes such as making bows are beyond them.

Early man first started using tools to manufacture other tools around 2.5 million years ago, scientists say.
But the bow was not first used until 64,000 years ago, when its invention greatly increased the flexibility of their activities.
Researchers from the University of T|bingen say that manufacturing the bow was a challenge to early man and reconstructed the steps he would have needed to take.
They say the bow and arrow made up a complementary tool set – with the interchangeable arrows working in tandem with the ‘controlling element’, the bow.
Making the bow took 22 raw materials and three semi-finished goods (binding materials and multi-component glue) as well as five production phases.
Further steps were needed to make the complementary arrows, reports the Cambridge Archaeological Journal. 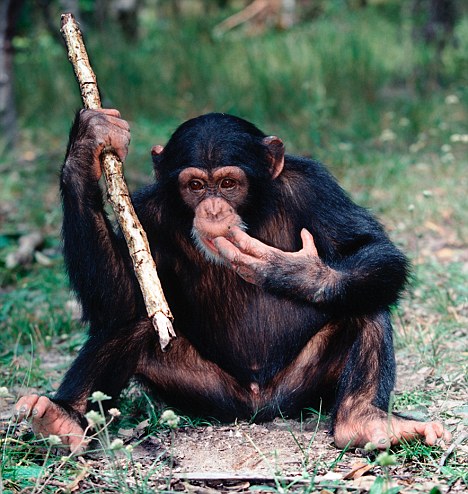 Other primates such as chimps are able to use tools, but complex processes such as making bows are beyond them

Researcher Miriam Haidle said: ‘The bow and arrow have long been regarded as a possible indicator of culture in prehistoric times. Bows and arrows appear to have been in use for some 64,000 years, given evidence from South Africa.
‘Until recently, their significance in human cognitive ability was unclear.
‘This study was able to show a high level of complexity in the use of tools at an early stage in the history of homo sapiens.’

The Herero and Namaqua Genocide from 1904 to 1907: Germans murder Africans