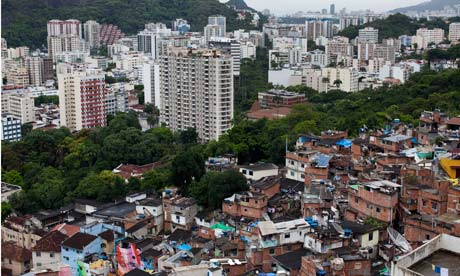 A view over Rio de Janeiro, where archaeologists believe they have unearthed the ruins of a notorious slave wharf. Photograph: Rodrigo Abd/AP
Tom Phillips in Rio de Janeiro

It was one of the busiest slave ports in the Americas, a filthy, bustling harbour where hundreds of thousands of Africans were sold into a life of exploitation and abuse.

Famished, exhausted and with their heads half-shaved, the slaves were herded off ships, groomed in “fattening houses” and dispatched to sugar and coffee plantations across Brazil.

Now, nearly two centuries after Rio’s notorious Valongo wharf began operating, local archaeologists believe they may have located the slave port’s ruins during a multibillion-dollar, pre-Olympic renovation of the city’s harbour. “As soon as the discovery was made I went there,” said Washington Fajardo, Rio’s secretary for cultural heritage. “It is a moving experience, seeing an existing city and then another city two metres below. You feel a bit like Indiana Jones.”

The possible discovery of the Cais do Valongo, or Valongo wharf, was made during the regeneration of Rio’s port area.

With the 2016 Olympics in mind, authorities are steaming ahead with a project known as Porto Maravilha or Marvellous Port, intended to transform Rio’s dilapidated port into a vibrant tourist and business hub.

Tania Andrade Lima, an archaeologist from Rio’s National Museum who has been leading the hunt for the Valongo, said 10 local archaeologists had been digging since February and now believed they had started unearthing “structures” connected to the notorious slave market.

Her team has confirmed discovery of Rio’s Empress’s wharf, believed to have been built on top of the slave port in the 1840s by the French architect Grandjean de Montigny and designed to welcome Brazil’s future empress, Teresa Cristina. A 19th-century sewerage system, created by British architect Edward Gotto, was also found.

Lima said the Valongo represented a crucial part of the city’s history that had been erased as Brazil sought to cover up the “brutal period of enslavement”. It is believed that some 3 million African slaves were shipped to Brazil between 1550 and 1888, when slavery was officially abolished.

“This area played an important role in Rio’s history – the Valongo wharf area has a strong symbolism for Afro-Brazilian descendants in our city,” Lima added.

Historians say the Valongo slave market operated from 1818 to 1830.

During those 12 years men, women and children from across west Africa were shipped into the port on squalid ships, packed into warehouses and sold.

The British clergyman Robert Walsh detailed the horrors of Valongo wharffollowing a visit in 1828. “The poor creatures are exposed for sale like any other commodity,” he wrote in Notices of Brazil in 1828 and 1829, describing how slave buyers would manhandle the slaves as if “buying a dog or mule”.

“They were all doomed to remain on the spot, like sheep in a pen, till they were sold; they have no apartment to retire to, no bed to repose on, no covering to protect them; they sit naked all day, and lie naked all night, on the bare boards, or benches, where we saw them exhibited.”

In another section Walsh, then chaplain at the British embassy, recalls: “The miserable slaves of Rio, employed only as beasts of burden in the streets, are, of all classes of the human race, by far the most abandoned and degraded.”

Maria Graham, a British writer who also visited the Valongo, described “rows of young creatures … sitting, their heads shaved, their bodies emaciated, and the marks of recent itch upon their skins.

“If I could, I would appeal to their masters, to those who buy, and to those who sell, and implore them to think of the evils slavery brings.”

Lima hopes her team will be able to officially confirm the Valongo’s discovery “over the coming months”. Fajardo, the heritage secretary, said the authorities planned to integrate the finds into the new port’s design. In the lead-up to the Olympics, changes to Rio de Janeiro’s urban landscape were likely to reveal further archaeological sites, he added. “We have high hopes,” he said.

Rio’s mayor, Eduardo Paes, vowed to build a square where the 19th century ports once stood. “These are our Roman ruins,” he said.

Arkansas Democrats control the Governor Mansion, House, and the Senate, Yet Republicans lead in Presidential Polls

South Sudan president to meet with PM in J'lem