By CATE LINEBERRY    June 21, 2013, 10:36 pm
On Jan. 7, 1863, just six days after the Emancipation Proclamation authorized African-American men to serve in the Union Army and Navy, Dr. Alexander T. Augusta, a freeman born in Norfolk, Va., wrote to President Lincoln requesting to serve as a surgeon “to some of the coloured regiments, or as physician to some of the depots of ‘freedmen.’” The 37-year-old Augusta had attended Trinity Medical College in Toronto; as he explained in his letter, “I was compelled to leave my native country, and come to this on account of prejudices against colour, for the purpose of obtaining knowledge of my profession; and having accomplished that object … I am now prepared to practice it, and would like to be in a position where I can be of use to my race.”
Lincoln sent the letter to the Army Medical Board, which initially ruled against allowing Augusta to serve. Refusing to give up, Augusta traveled to Washington to personally appeal his case, and he finally persuaded the board to overturn its decision. In April 1863, Augusta became the first African-American commissioned as a medical officer in the Union Army and was awarded the rank of major. He was one of only 13 African-Americans to serve as surgeons during the war, out of a total of 12,000.
Augusta was assigned as the surgeon in charge of the Contraband Hospital in Washington. The hospital, a collection of mostly tents and barracks, had been established to provide medical treatment to thousands of former slaves, known as “contraband,” who had fled to the capital after Lincoln ended slavery in the District of Columbia in April 1862. By the time of Augusta’s selection a year later, the hospital was also treating African-American soldiers. 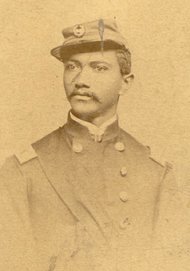 
Shortly after his appointment, Augusta was viciously attacked on a train in Baltimore, while in uniform, by a group of white men. He later responded to the attack in a weekly African-American newspaper, writing, “My position as an officer of the United States, entitles me to wear the insignia of my office, and if I am either afraid or ashamed to wear them, anywhere, I am not fit to hold my commission.”
After six months with the Contraband Hospital, Augusta left to become a regimental surgeon for the Seventh Infantry of United States Colored Troops in Maryland. (He was soon transferred to an African-American recruiting station after several white surgeons objected to his serving as their superior officer.) With Augusta’s decision to leave the hospital, William P. Powell Jr., the son of an African-American father and American Indian mother, who had received his medical training in England, became the surgeon in charge.
In all, 7 of the 13 black surgeons worked at the Contraband Hospital. Among these men were Augusta’s protégé, Anderson R. Abbott, a Canadian whose parents had emigrated from Alabama to Toronto, who joined the Union as a contract surgeon in 1863, as well as the abolitionist Charles B. Purvis, who first served at the hospital as a nurse before graduating from Wooster Medical College in Cleveland in 1865. 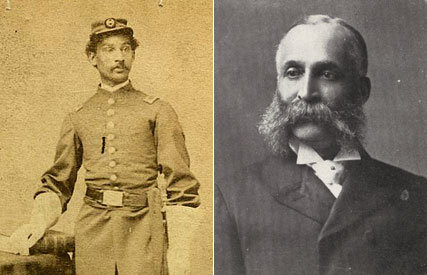 John V. Degrasse, who had studied at Maine Medical College and who, like Augusta, was a commissioned officer, was the only African-American surgeon to serve in the field with his regiment. The other five surgeons who did not work at Contraband Hospital were assigned to various military hospitals and recruiting stations.
In addition to these remarkable men, who overcame almost insurmountable obstacles to care for wounded soldiers, countless other African-American men and women, with no formal training, worked as nurses in black-only and white-only hospitals and on battlefields. Some of them had been born free; others were former slaves. Charles Purvis’s cousin Charlotte Forten, born free in Philadelphia in 1837, had traveled south to St. Helena Island, S. C., in 1862 to help teach former slaves to read and write. When soldiers of the 54th Massachusetts Regiment of the United States Colored Infantry in South Carolina were defeated at Fort Wagner during brutal hand-to-hand combat in July 1863, she volunteered as a nurse to care for them.

The Red Rover, a captured Confederate paddle steamer that was converted into a naval hospital.——United States Naval History and Heritage Command

Ann Stokes, a former slave, was the first African-American woman to serve on a United States military vessel when she began her work as a nurse in 1863 under the Sisters of the Holy Cross. She worked aboard the Red Rover, a former Confederate paddle steamer that had been converted into a naval hospital. Stokes was paid for her work and eventually became the only black woman awarded a pension from the Navy for her service during the Civil War. 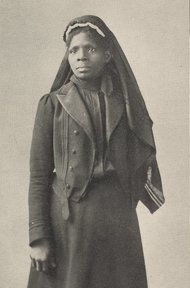 Another former slave, Susie King Taylor, who had been taught to read and write at secret schools while a child living with her grandmother in Savannah, Georgia, spent more than three years working for the Union’s First South Carolina Colored Volunteers while her husband served as a sergeant in the regiment. Officially a laundress, she tended to the wounded while teaching others to read and write. She was never paid for her work.
In 1902, more than three decades after the war, Taylor published “Reminiscences of My Life in Camp with the 33d United States Colored Troops Late 1st S.C. Volunteers” — the only published memoir by an African-American nurse during the Civil War. In the opening she explains her reasons for writing the book:

So I now present these reminiscences to you, hoping they may prove of some interest, and show how much service and good we can do to each other, and what sacrifices we can make for our liberty and rights, and that there were ‘loyal women,’ as well as men, in those days, who did not fear shell or shot, who cared for the sick and dying; women who camped and fared as the boys did, and who are still caring for the comrades in their declining years. So, with the hope that the following pages will accomplish some good and instruction for its readers, I shall proceed with my narrative.

The Union wasn’t alone in depending on African-American nurses. Some Confederates hospitals relied on black nurses to help care for the overwhelming number of sick and wounded. The largest Confederate hospital, Chimborazo Hospital in Richmond, Va., used hundreds of African-Americans, most of them male slaves, to provide care to thousands of patients. The surgeon in charge of the hospital in 1862, James Brown McCaw, wrote, “It will be entirely impossible to continue the hospital without them.” After Richmond was captured in April 1865, the Union turned it into a hospital to treat black soldiers. 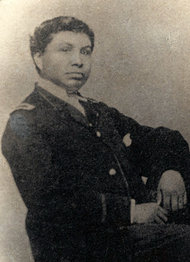 When the war ended, the contributions of many of these African-Americans were largely forgotten. In fact, when William P. Powell Jr., who served as the surgeon in charge of the Contraband Hospital after Augusta’s departure, retired from medicine in 1891 because of poor health and a disability, the government denied his request for a pension, citing his role as a contract surgeon rather than a commissioned officer and determining that he did not have enough proof of his disability. Powell spent the next 24 years fighting the decision, and even wrote letters to Presidents William McKinley and Theodore Roosevelt asking for their assistance, until his death in 1915 at the age of 81. He never received his pension.