By ALAN COWELL
Published: June 6, 2013
LONDON— In a remarkable admission that imperial forces tortured Kenyans fighting against British rule in the 1950s, Foreign Secretary William Hague on Thursday announced that the government would pay about $30 million in compensation to more than 5,000 victims of abuse in its former East African colony.

While Mr. Hague said the government regretted the abuses, some analysts said his words — the first such admission — fell short of a full apology to the Kenyans who confronted British colonial forces during the Mau Mau uprising, which British forces suppressed several years before independence in 1963. About 12,000 Africans died in the revolt.

Mr. Hague’s words seemed to rewrite a narrative of essentially benevolent colonial rule relayed to generations of Britons back home, raising the possibility that citizens of other outposts of an empire that once spanned much of the globe could seek compensation. 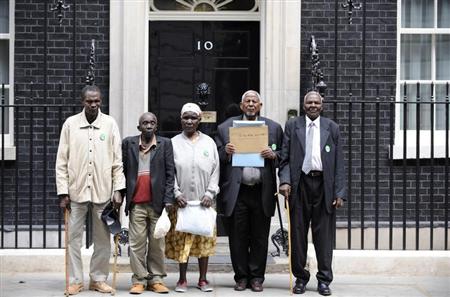 “The British government recognizes that Kenyans were subject to torture and other forms of ill treatment at the hands of the colonial administration,” Mr. Hague told Parliament, reading from a prepared statement. “The British government sincerely regrets that these abuses took place and they marred Kenya’s progress toward independence.” He said the compensation package totaled £19.9 million to 5,228 claimants.

Mr. Hague’s announcement came after the government settled out of court with lawyers representing the claimants following a landmark court ruling last October in which three Kenyan torture victims won the right to sue the British authorities after legal battles starting in 2009.

The claimants accused British forces of beating, torturing, raping and even castrating people as they sought to put down a revolt begun by the Mau Mau, an anticolonial group, that targeted white settlers and sought to end British domination.

Martyn Day, a lawyer for the Kenyan claimants, said he hoped that Mr. Hague’s statement would prove to be “the final resolution of this legal battle that has been going on for so many years.”

He added that the victims “now at last have the recognition and justice they have sought for many years. For them, the significance of this moment cannot be overemphasized.”

Britain also agreed on Thursday to pay for a memorial to be built in Nairobi, the Kenyan capital, to commemorate colonial abuses.

“This is a great day for us Mau Mau people,” Gitu Wa Kahengeri, a leader of the Mau Mau War Veterans Association, told Reuters in Nairobi.

“This is confirmation we were freedom fighters and not terrorists. We have been waiting a long time to hear the British say, ‘What we did in Kenya was wrong.’ ”

Britain’s first African colony to win independence was Ghana in 1957, but in the 1960s, a string of other territories run by European powers demanded freedom. One of the most intractable confrontations was in Zimbabwe, formerly Rhodesia, where a white minority of settlers unilaterally declared independence in 1965 and later fought a bloody war with nationalist guerrillas that ended only with independence in 1980.

Fearful of setting a precedent that would open a floodgate of claims, the British government has always insisted that the legal responsibility for actions of the colonial administration lies with its successor; in other words, the government established at independence.

“We continue to deny liability on behalf of the government and British taxpayers today for the actions of the colonial administration,” Mr. Hague said in his statement on Thursday. “Indeed, the courts have made no findings of liability against the government in this case.”

The British announcement may resonate much further afield, since President Obama’s Kenyan grandfather, Hussein Onyango Obama, worked for many years as a servant for white colonialists and served as a cook for a British captain in the King’s African Rifles during World War II.

On his return to postwar Kenya, the grandfather was said to have been sympathetic to the Kenyan African Union movement, a forerunner to the much more radical Mau Mau rebellion. There are reports that he was arrested and tortured by the British in 1949, although subsequent accounts cast doubt on that assertion.
http://www.nytimes.com/2013/06/07/world/europe/britain-colonial-torture-kenya.html?_r=0

What makes a 'real African'?