Kate Mossman The Observer, Saturday 1 June 2013
A few weeks ago in these pages, Birmingham rapper Lady Leshurr asked why there had been no high-profile female rappers in the UK since Ms Dynamite.Akala seems a good person to consult – one, because he’s her brother, and two, because you can ask Akala just about anything and you’ll get a pretty comprehensive answer. In the course of 68 minutes in a London community centre under the Westway, he talks about 16th-century explorers, Biggie Smalls, the universities of 13th-century Timbuktu, tai chi, the Black Wall Street of Oklahoma, the African city portraits of Olfert Dapper, Eminem, peanuts, Napoleon’s generals, traffic lights and golf. But 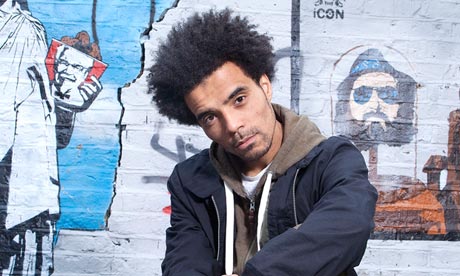 back to Ms Dynamite.”I remember the Daily Mail wrote an article about my sister at the time,” he says, “and essentially their argument was, ‘Well, she’s not really black, is she – she’s quite clever and she’s got a white mum!’ It was so funny the way they tried to co-opt us. Remember that big story about Bob Marley and his ‘white dad’ last year? He was unequivocally black power, but he’s rewritten as this fun-loving Rasta. Mark Duggan [the Tottenham man shot by police in August 2011] was also mixed race, but no one’s ever going to co-opt Mark Duggan!”
Ms Dynamite (Niomi Arleen McLean-Daley) made a mixtape, A Little Darker, with her brother in 2006, the year he won a Mobo award for best hip-hop act. They grew up in Kentish Town, north London (she’s 32, he’s 29 – real name Kingslee James Daley). Every year they’d write and perform plays in honour of their Scottish mum’s birthday; three or four times a week they’d go to the Hackney Empire where their Grenadian stepdad, Tony Gulley, was stage manager. Back then, Akala recalls, it was all Caribbean and African drama – or the Russian circus. As a teenager, Akala spent most of his time playing football (for West Ham under-18s) but he also excelled academically. Only in adulthood did he notice that the complex culture in which he’d been raised was ignored in mainstream visions of what it means to be black and British.
“There’s an intellectual culture among young, working-class African-Caribbean children that comes from a certain strain of hip-hop – Gil Scott-Heron, Rastafarianism – and it’s completely absent from any narrative of that world,” he says. “My sister was worshipped in a way I can’t tell you; when we went to Brixton or Tottenham they wouldn’t let her pay for anything. And although no one said it out loud, we all knew it was because she was representing a side of intellectual black culture that is never usually acknowledged.
“I hate to say it, but this country is not comfortable with the idea of young, intelligent black people – especially men. They’re treated as the exception to the rule. It’s the same with chavs – I have plenty of white, working-class friends from east London who read Max Planck and Niels Bohr and Albert Einstein. But their story is never going to be told because they’re not supposed to be like that.”
Akala once called rap “the misogynistic, materialistic handmaiden of American capitalism”, but he’s a lot more lighthearted than that makes him sound. “A lot of hip-hop is about getting people to eat McDonald’s,” he says. UK rappers remain relatively non-commercial because they maintain strong connections with their cultures, and for many reasons – the class system being the biggest – their views are not what society wants to hear. He mentions Scottish-Iraqi rapper Loki: “Millions of hits on YouTube but no record company is knocking down his door.”
Akala’s fourth solo album, The Thieves Banquet, is a colourful onslaught of emotionally charged, socially conscious hip-hop recorded with a live band. His background in drama is clear from the title track, an entertaining masque of a rap in which four allegorical evils compete for a place in hell in the presence of a priapic Satan. His comical voices are reminiscent of Busta Rhymes or Darth Vader, and there’s a lot of mounting, guitar-rock tension. He’s unafraid of psychological talk (“Change the way you look at yourself, the self changes” – Another Reason) and nostalgia: Old Soul conjures the ghosts of Gregory Isaacs and Hendrix, looking back to the days “when Miles Davis was a commercial artist”.
http://www.guardian.co.uk/music/2013/jun/02/akala-thieves-banquet-rap-interview