By SIR TREVOR MCDONALD
PUBLISHED: 17:00 EST, 5 January 2013 | UPDATED: 18:47 EST, 5 January 2013
Fredrick Baer once claimed to be so soft-hearted that he cried if a butterfly hit his windscreen. He is devoted to his pet cat Lucky, whom he describes as his ‘heart, soul and world’. Yet one chilling day last year I sat with him in his cell on Death Row in the Indiana State Prison and listened to him describe how he had slit the throat of a young mother and partially decapitated her four-year-old daughter.
It had been a random attack while Baer was high on crystal meth and marijuana. His victims were strangers to him, a woman and a child simply unlucky enough to answer the door when he knocked at their home.
His wickedness makes him an outcast even among other Death Row inmates at this notorious maximum security penitentiary. As Baer himself told me: ‘I think I probably deserve to die.’ 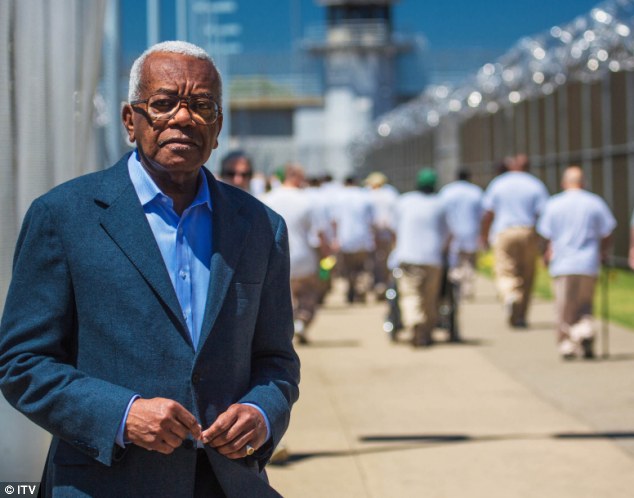 Moving tales: Trevor McDonald in Indiana State Prison where he came face to face with some of America’s most dangerous prisoners and every-day life on Death Row

By the time he had finished speaking even the hardened legal professionals alongside me were ashen. Although his guilt was not in doubt, Baer had never divulged such detail before, and while he was securely handcuffed, I could not wait to get out of his cell. I was, I admit, terrified. I thought: ‘What the hell am I doing in here? Why am I sitting on the bed of a man  on Death Row with absolutely nothing to lose?’
The answer was to make a ground-breaking documentary about a subject that divides the civilised world: capital punishment. What does it mean to exist in the shadow of a death sentence, or a jail term of a century of more?

There are 1,900 inmates in Indiana State Prison. Twelve are on Death Row and many others have sentences far in excess of their natural life span. I was invited to spend two weeks among them, given unprecedented access to multiple murderers, cop killers, gang members, drug-runners, hitmen and sexual deviants.

I needed a lot of convincing to say yes, and if my mother had been alive, she’d have told me I was crazy.
It was a fortnight filled with surprises. The first was that I thought I would find, as in the iconic prison film The Shawshank Redemption, that ‘everyone is innocent’. That was not the case. 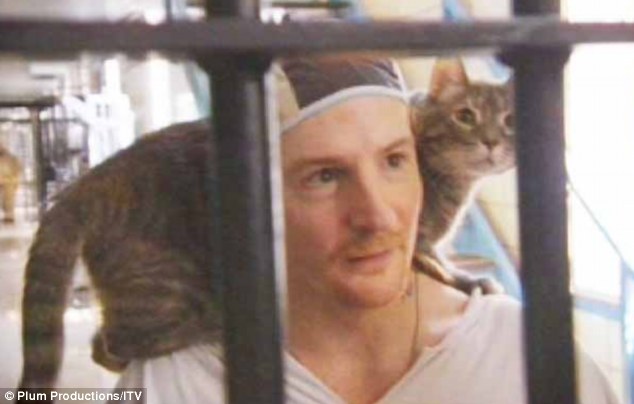 Softer side of a kill: Death Row inmate Frederick Baer lives for his pet cat Lucy, yet this is the same man who slit the throat of an innocent young mother and nearly decapitated her child

Here were dozens of men talking freely about their crimes. There was a lot of blunt self-assessment and some profoundly sad reflections such as from one Death Row inmate whose criminal career began with stealing the cookie jar in kindergarten. He was always last in the queue for a cookie and was often missed out, so one day he simply stole the jar. When he grew up he shot and killed a policeman.
They were articulate, knowing men, perhaps none more so than double murderer Ronald L. Sanford. He killed two pensioners when he was aged just 13. He escaped Death Row but got a 170-year sentence. He will only be eligible for parole in 100 years. He’s never been to a school prom, never driven a car or travelled abroad.
In his cell I found him reading books about eugenics and metaphysics, a way of escape for a man who has none. He’s a bit of a poster boy for Indiana Prison – yet I still had to interview him in a steel cage. That’s the reality of life lived in lockdown 23 hours a day. About the one place where there is an air of normality is the prison barber’s shop. It’s for inmates and staff alike but is run by prisoners who handle scissors and razors.
It was cosy and filled with easy banter and bonhomie. The barbers were in perfectly ironed tops, their leather wallets in breast pockets. 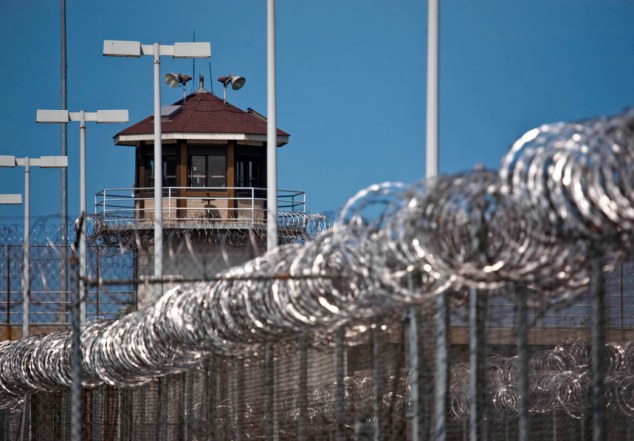 Indiana State Prison: The perimeters of the prison are enforced, covered in barbed wire and kitted out with cameras and the constantly watching eyes of the guards

One was apologising that his moustache was not properly waxed that day. He looked like your favourite uncle, or someone who might turn up with your gifts at Christmas, yet he had been a hitman. Despite this, and despite the feuds and fights which are a potent undercurrent to prison life, there has never been an incident in the shop.
And it was while in there that I came closest to understanding prison life. The prisoners had a powerful work ethic and were busy and fulfilled doing something for others. They were, I suppose, the maximum security equivalent of model citizens and were leading, insofar as they could, complete lives. Yet at the end of the day they returned to cells within shouting distance of Death Row.
The inmate who runs the barber’s shop had a wall of photographs. He’d mounted them on cardboard so he could take them with him if he ever gets out. He won’t, of course, which raises another question about America’s judicial system: what is the difference between being given 150 years or being on Death Row?
The answer, I suppose, is hope and arriving at some kind of modus vivendi. One inmate was married to a woman in St Albans, while Baer had a girlfriend in Germany and spent his time imagining her pottering around her kitchen cooking dinner. 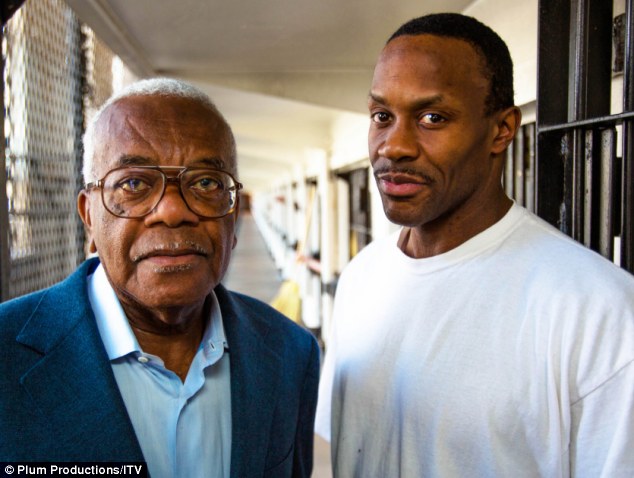 Growing up behind bars: Sir Trevor McDonald with Ronald L. Sanford who is serving a 170-year sentence for committing a double-murder at the age of 13

One Death Row prisoner was obsessed with the late Princess Diana and had papered his cell with pictures of her, including the famous Mario Testino portrait of her in a strapless white dress and tiara. He said he believed in her goodness and likened her to Jesus Christ or Mother Teresa of Calcutta. Another, who had killed his wife and two children, had never learned to read or write, so he polished his cell and its contents until they shone. A lot had turned to religion for solace.
Several, including Baer, had joined a pet adoption programme and been given cats to look after. The idea is to make inmates more passive because ownership encourages a sense of responsibility. And there’s real affection there. One cat called Rascal had made friends among other prisoners besides his owner: no one from that gang of murderers would kill a cat. They would kill each other perhaps, but not a cat.
The men’s common fate has given rise to some unusual friendships, most of the ‘he’s got my back and I’ve got his,’ nature. Inmates have their own codes of conduct and specific hatreds. The cop killer described some of the other inmates as ‘sharks circling’, yet his bravado gave way to vulnerability when he spoke to me about his past.
I am no amateur psychologist, but it struck me that their early lives were not ideal. I didn’t particularly like any of them but it was impossible to cut yourself off entirely from a sense of sadness at the circumstances which brought them to prison. I was horrified by what they had done, but you’d be lacking any humanity and empathy if you did not feel for someone preparing to be put to death by the state. 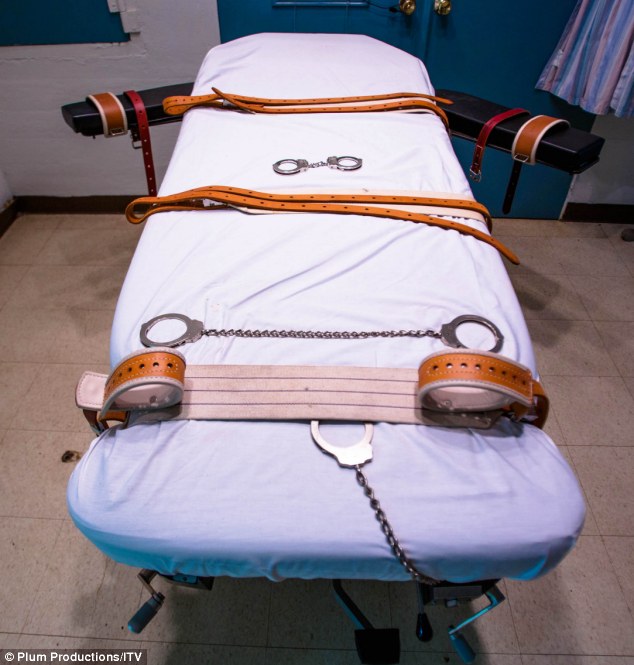 Final rest: The trolley to which Death Row prisoners are strapped prior to the lethal injection

The time we saw the gurney – the trolley on which a condemned man is strapped prior to execution – was, I think, the defining moment for me. Imagination is even more powerful than reality and the real fear lay in the Superintendent (the prison governor) saying: ‘These are the steps the condemned man would take, this is the isolation room where he would wait to be taken to the gurney . . .’

I was left imagining someone’s last hours in that room with just  a pair of slippers, a TV screen, a clock on the wall, and their every movement watched.
I wrestled with that: how does one come to terms with the final hour of life in a room adjoining an execution chamber? The gurney itself is just nuts and bolts, straps and handcuffs, but what goes through the mind? I saw an image of that room when  I went back to my hotel and I can see it now. I can still visualise the yellow slippers waiting for the feet of a condemned man.
The Superintendent is a fascinating character. He visits the men on Death Row every week and – this was another shock – gets to know the men over whose executions he will eventually preside.
He says: ‘Our course in life throws us together. At one particular juncture we will participate in the same event.’ He means the death of one  of them.

I am not a religious person but the Superintendent told me he had made peace with God about his job and I took him at his word. 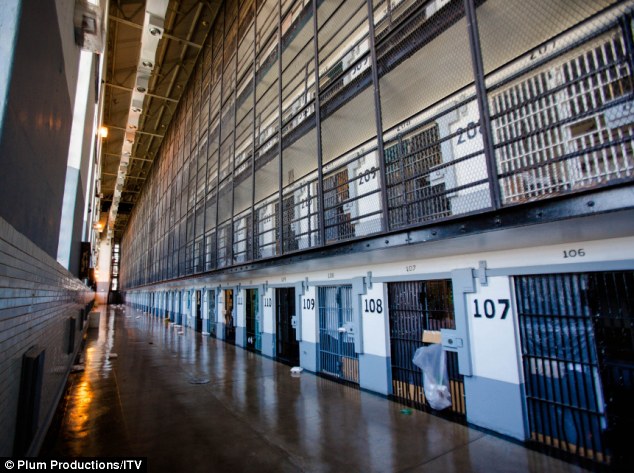 End of the road: Death Row at Indiana State Prison currently hosts 12 of the prison’s 1,900 inmates

I have never accepted the philosophy of state killing and my mind has not been changed by this experience. But I do understand why that system is in place for people like Fredrick Baer, and why American voters continue to support it.
When I emerged from Baer’s cell after hearing him speak in such detail, there was absolute silence. Usually there is professional banter common to all TV jobs: bad jokes and teasing and chat, but after that there was just a hush.
I was deeply affected by the depth of evil described in the interview and, like everybody on the crew, I found myself in need of a stiff drink.
Baer, who committed his double murder in 2004 and was sentenced a year later, is likely to be the next man at Indiana sent for execution.
There is a natural momentum to human life, to our work and relationships but the men I met on Death Row exist in a state of stasis. They are prisoners of the past, trapped in the present, with no true future.
It was that which scared and  saddened me the most. Not the locks and keys or cages, or even the gurney. It was the fact that all they have left in their lives is time, and for some of them even that is running out.
Inside Death Row With Trevor McDonald starts on ITV1 at 9pm on Thursday January 17.
Read more: http://www.dailymail.co.uk/news/article-2257579/My-nightmare-Death-Row-IN-gribbing-dispace-Indiana-State-Prison-veteran-broadcaster-Sir-Trevor-McDonald-shocked.html#ixzz2HEDyBF4n