As a child in Chicago, Tarrus Richardson clipped newspaper articles about Reginald Lewis, a financier who would become the first African-American to run a billion-dollar business. Mr. Richardson’s father, a Vietnam veteran, started a popcorn business, and made Tarrus a shareholder at age 8. Mr. Richardson went on to Harvard Business School, and with his friend, Willie Woods, opened an investment firm, ICV Capital Partners, specializing in inner-city companies, in 1998. They were among the firms chosen during the past decade to invest a portion of New York State’s $250 billion pension fund assets.
Mr. Richardson was a young capitalist on the rise.
In 2010, he helped organize a broad coalition to support legislation to open doors for blacks, Latinos and women in the nearly all-white worlds of finance, including establishing goals for minority and female participation in pension investments. Dozens of young black financiers lobbied in Albany.
The New York State comptroller, Thomas P. DiNapoli, a liberal Democrat, had reservations about the legislation. Testy words were passed, but compromises were reached. Then Gov. David A. Paterson, legislators and Mr. DiNapoli smiled as it was signed into law.
The next day, a senior official with the comptroller’s office tried to get Mr. Richardson fired.
Tyson A. Pratcher, an assistant comptroller who helps oversee state pension funds, summoned Mr. Woods, the managing partner of ICV, to his office and got blunt. “Hey, it’s going to be tough doing business with somebody who has somebody like Tarrus on their team,” Mr. Pratcher reportedly said. 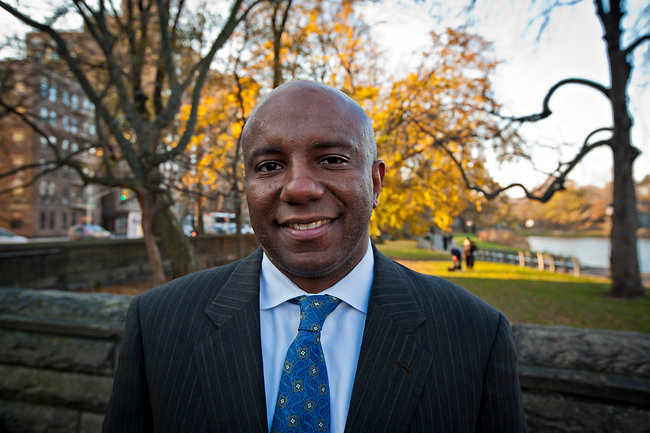 Tarrus Richardson was fired from the investment firm he opened in 1998.

In the same conversation, Mr. Pratcher complained that Mr. Richardson pushed too hard for the legislation. “How’s he doing this job and doing all this legislation?” Mr. Pratcher reportedly demanded of Mr. Woods. “How’s he effective in his job?”
Mr. Richardson, in fact, was one of the top investment performers in his firm.
A short time later, Mr. Woods recalled, another official with the comptroller’s office told him that lobbying against “your largest investors” was a big problem.
Within a month, Mr. Woods fired his friend Tarrus Richardson.
All of this is laid out in a lawsuit that Mr. Richardson filed last week in federal court in Manhattan, and in a deposition that Mr. Woods gave several years ago in an arbitration case. The arbitrator directed Mr. Woods to pay $4.7 million to Mr. Richardson in compensation for his dismissal.
Asked about Mr. Richardson’s lawsuit, the comptroller’s office released a distancing statement: “The New York State Common Retirement Fund was not involved in any decision about his employment status at ICV.”
But two sources familiar with this case said that the comptroller’s office’s displeasure with Mr. Richardson was widely known, and that high-ranking officials in that office complained vigorously about other professionals who lobbied for the bills. These sources asked to remain unnamed for fear of retaliation.
There was a legitimate policy debate to be had over the 2010 proposals. The comptroller feared that targets would amount to setting racial and gender quotas, and he persuaded legislators to strip these from the bill.
And Mr. Richardson speaks well of Mr. DiNapoli. “To be frank, he had one of the more progressive investment policies,” he said. “We sought to codify it so that we didn’t have to depend on Mr. DiNapoli.”
But none of this explains why top public officials apparently tried to undermine investment professionals who spoke openly on questions of public policy. Mr. Richardson, in particular, is widely respected in black investment circles for his insistent commitment to social responsibility.
When Mayor Michael R. Bloomberg gave his keynote speech in 2011, at the beginning of a $130 million effort to encourage young black men to get an education, he chose the offices of the Council of Urban Professionals, which Mr. Richardson helped found.
A person close to the comptroller, speaking on the condition of anonymity, suggested that if you invest the state’s money and take a policy stand that annoys staff members, you risk some blowback.
“His arguments did not conform to our legal reading of what was possible,” this person said. “Just hypothetically, that could call into question his credibility and stewardship.”
No one has ever accused me of possessing an excess of financial acumen, but that strikes me as a leap into the abyss. If Goldman Sachs took a position that conflicted with the comptroller’s legal reading, would Goldman Sachs lose credibility as an investment adviser?
To ask that hypothetical question is to answer it.
Mr. Richardson has a round face with close-cropped hair, flecked gray. His voice is corporate-suite soft. He lives in Harlem with his wife and two children. He pauses for long seconds before answering questions about his fall.
“There’s a greater chance this harms my future prospects more than it helps me,” he says. “I’m super anxious about that.”
“But they’ve harmed me and a much larger cause,” he adds. “And there’s not a soul in the world who will speak up.”