By BEN RATLIFF
Published: January 29, 2013
Butch Morris, who created a distinctive form of large-ensemble music built on collective improvisation that he single-handedly directed and shaped, died on Tuesday in Brooklyn. He was 65.

The cause was cancer, said Kim Smith, his publicist and friend. Mr. Morris, who lived in the East Village, died at the Veterans Affairs Medical Center in Fort Hamilton.

Mr. Morris referred to his method as “conduction,” short for “conducted improvisation.” He defined the word, which he trademarked, as “an improvised duet for ensemble and conductor.”

He would often begin a performance by setting a tempo with his baton and having his musicians develop a theme spontaneously and then seize on the musical ideas he wanted to work with, directing the ensemble with a vocabulary of gestures and signals. An outstretched upward palm, up or down to indicate volume, meant sustain; a U shape formed with thumb and forefinger meant repeat; a finger to the forehead meant to remember a melodic phrase or a rhythm that he would summon again later. 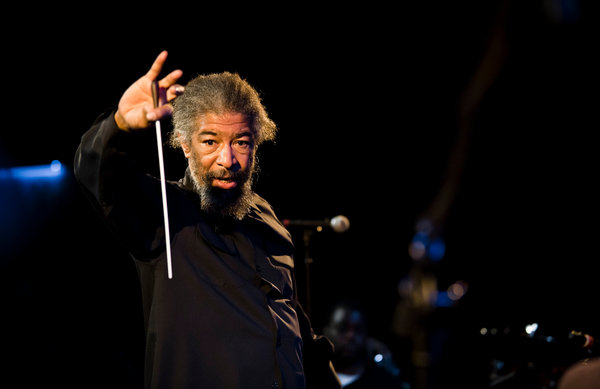 Butch Morris at the NYC Winter Jazzfest in 2011. He defined and trademarked “conduction.”

He introduced this concept in 1985 and at first met resistance from musicians who were not willing to learn the vocabulary and respond to the signals; he was often in a position of asking artists to reorient themselves to his imagination and make something new out of familiar materials. But he demanded to be taken seriously, and he was. After 10 years he had made enough recordings to release “Testament,” a well-received 10-disc set of his work. After 20, he had become an internationally admired creative force, presenting conductions at concert halls worldwide and maintaining regular workshops and performances at the East Village spaces Nublu, Lucky Cheng’s and the Stone.

Mr. Morris, who also played cornet, began his career as a jazz musician in Los Angeles. After settling in New York in the early 1980s, he took his place among both the downtown improvising musicians of the Kitchen and the Knitting Factory and the purveyors of multidisciplinary, mixed-media art flourishing in the city.

Though the bulk of his conductions were with those trained in jazz or new music, many different kinds of performers could take part, as long as they had learned his method. (Five days of rehearsal was his preference.) Conduction No. 1, “Current Trends in Racism in Modern America,” was performed in 1985, at the Kitchen, with a 10-piece ensemble including the saxophonists John Zorn and Frank Lowe, the turntablist Christian Marclay and the singer Yasunao Tone. Others were for full classical orchestras; electronic instruments and music boxes; dancers, actors and visual artists; and gatherings of 19 poets (No. 27) or 15 trumpets (No. 134).

Mr. Morris occasionally used written music or texts, by himself or others — he did this with the saxophonist David Murray’s big band and octet in the early 1990s, and in more recent years with the group Burnt Sugar, an ensemble influenced by his methods, for which he conducted a version of Stravinsky’s “Rite of Spring” — but most often he used no written material at all.

In decades of workshops around the world, and for a stretch, from 1998 to 2001, at Bilgi University in Istanbul, he taught his signals and gestures. Some of these were common to all conductors; some were adapted from the California jazz bandleaders Horace Tapscott and Charles Moffett, whom he had known early in his career (he also cited Sun Ra, Lukas Foss and Leonard Bernstein’s “Two Improvisations for Orchestra” as influences); many were his own.

He said he didn’t care whether people thought his music was jazz or not, although he himself saw it as derived from jazz but not beholden to it. “As long as I’m a black man playing a cornet,” he reasoned, “I’ll be a jazz musician in other people’s eyes. That’s good enough for me. There’s nothing wrong with being called a jazz musician.”

Lawrence Douglas Morris was born in Long Beach, Calif., on Feb. 10, 1947, and grew up in the Watts neighborhood of Los Angeles. The son of a career Navy man, he played trumpet in school orchestra, and after high school copied big-band arrangements for a Los Angeles music studio. In 1966 he served in the Army, as a medic in Germany, Vietnam and Japan. Once back home, he joined Mr. Tapscott’s big band, a creative and social hub in the Los Angeles experimental-jazz scene.

After studying music at Grove Street College in Oakland, Calif., he briefly moved to New York. In 1976 he left to play and teach music in France and the Netherlands. In 1981 he relocated permanently to New York, not long after his brother Wilber, the bassist through the 1980s and early ’90s in David Murray’s octet, did.

Wilber Morris died in 2002. Mr. Morris is survived by a son, Alexandre; a brother Michael; and a sister, Marceline. His marriage to Therese Christophe ended in divorce last year.

Conduction, with all its logistical complications and no institutional system to support it, was never a steady source of income. Mr. Morris also taught and sought commissions; he wrote music for dancers, including Min Tanaka, Diane McIntyre and Yoshiko Chuma; he worked as musical director for the short-lived ABC crime series “A Man Called Hawk”; he wrote original music for Ntozake Shange’s play “Spell #7” and for the Wooster Group and the Folger Shakespeare Theater in Washington.

One of his projects, in the early 1990s, was writing music for windup music boxes, for which he asked visual artists he knew — including David Hammons, A. R. Penck, Betye and Alison Saar, and Michael Hafftka — to create the outer shells. But he insisted that the artists not think of them as music boxes. “I tell them, ‘I don’t want to think in terms of boxes,’ ” he explained. “I want to think of them as resonating containers.”