LOS ANGELES — The police here were preparing for another night of protests on Tuesday, and community activists were working to maintain the peace after anger over the acquittal of George Zimmerman in the shooting death of Trayvon Martin turned violent in South Los Angeles on Monday night.

A group of about 150 mostly young people broke away from a peaceful demonstration on Monday in the Crenshaw district, long home to many of the city’s black residents. Protesters ran through the streets, blocking traffic, hitting cars, assaulting pedestrians and ransacking businesses, the police reported.

Hundreds of police officers in riot gear descended on the area to quell the unrest. Fourteen people were arrested, the police said, half of them juveniles.

Two decades after the acquittal of white Los Angeles police officers in the beating of Rodney King sparked deadly riots in the same part of the city, residents and public officials agreed that the more muted anger over the Zimmerman verdict — and the much smaller outbreak of violence — showed how much, and how little, has changed.

“Twenty-one years ago we witnessed what could happen when there’s a reaction to a verdict,” Mark Ridley-Thomas, a Los Angeles County supervisor who represents South Los Angeles, said at a news conference on Monday night. “Similar sentiments are being expressed here in this space, but the response of the L.A.P.D. is qualitatively different.” 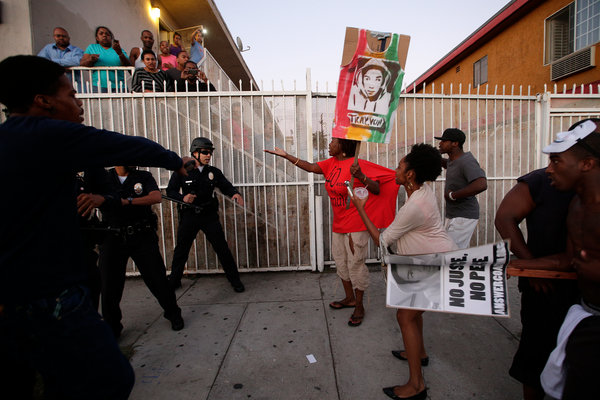 Many in the neighborhood, while remaining wary of law enforcement officials, agreed that relations between black residents and the Police Department had vastly improved. The police allowed the demonstration to continue until the violence began.

“The police did a top-notch job,” said Trebien Bellows, 46, a lifelong neighborhood resident. “Before things got crazy, they jumped right on it.”

Despite his praise for the police, Mr. Bellows said he understood the frustration expressed by the group that broke away from the protest in outrage. Young black people continue to be perceived as threats and targeted by the police, he said, and the Zimmerman case showed how they often paid with their lives.

“What happened after the peaceful protest was basically just kids lashing out,” he said. “Young African-American and Latino kids, they’re the ones being targeted.”

Darnell M. Hunt, a sociology professor at the University of California, Los Angeles, who studied the 1992 riots, said that five years after the election of the country’s first black president, race relations are at a critical point.

When Barack Obama was elected, he said, crowds gathered in Leimert Park to celebrate. “They really did see it as a new day in terms of race, and most importantly for black youth, who for generations never seriously thought they could become president,” Dr. Hunt said.

Now, the same community is protesting instead of celebrating. “People were hoping their view of justice would be served, and it wasn’t,” Dr. Hunt said. “They’re having a hard time believing in the American dream and the idea that African-Americans had finally become full-fledged citizens.”

Attorney General Eric H. Holder Jr., in a speech Tuesday at the N.A.A.C.P. convention in Orlando, Fla., condemned Florida’s Stand Your Ground law. “It’s time to question laws that senselessly expand the concept of self-defense and sow dangerous conflict in our neighborhoods,” he said.

The unrest in Los Angeles followed consecutive nights of largely peaceful protests in cities like Atlanta, Chicago, New York and Washington. In Oakland, Calif., demonstrators blocked traffic along Interstate 880 for a brief period during the afternoon rush Monday before authorities cleared the road.

The protesters made varied demands. Some wanted the federal government to prosecute Mr. Zimmerman. Others hoped for an overhaul of the entire American justice system.

“This is much bigger than just this one trial,” said Oriana Sly, 20, of Los Angeles. She carried a sign that read “Justice for Trayvon” as she marched up Crenshaw Boulevard here on Sunday night. “People of color have not received our fair share with the American justice system.”

On Monday night, however, some protesters’ frustration boiled over. They stormed a Walmart and other stores. They ran through the streets, blocking traffic and jumping on stopped cars, kicking them and dancing on the hoods. A television news crew was attacked.

As the city’s new mayor, Eric Garcetti, called for calm on the streets on Tuesday, he acknowledged the echoes from the Rodney King riots, but insisted the city had come a long way.

“This is a different moment in time; we can see how much change for the better the city has enjoyed since 1992,” Mr. Garcetti said. “For somebody born after 1992, they just see the world the way it is before them. I think the importance of seeing this through the youth’s eyes is to see what’s left undone.”