Video of incident at bottom of page:

Black community leaders in Houston, Texas, are alleging racism after an all-white jury acquitted a white police officer of beating a black teen.

The beating of 15-year-old Chad Holley in 2010 was caught on tape and outraged the black community. Holley, now 18, was fleeing from a burglary, though the video shows him put his hands behind his back as officers surround him and kick him.

Andrew Blomberg, 29, was the first of four police officers to stand trial for their roles in a beating that prompted fierce public criticism of the police department by community activists who called it another example of police brutality against minorities. 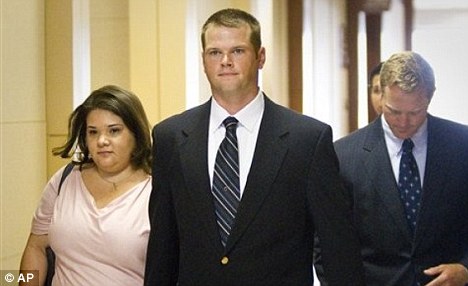 Relieved: Andrew Bloomberg walks out of court a free man after being acquitted of beating a teen with other police officers 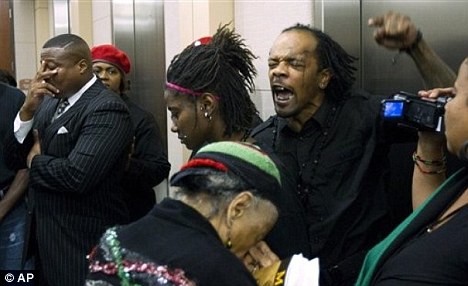 Outrage: Members of the black community were furious when the jury acquitted Blomberg of the beating

Blomberg fought back tears after the verdict was read, then hugged his attorneys and started to cry as he embraced his parents. He could have faced up to a year in jail if convicted of official oppression, a misdemeanor that alleged Blomberg as a public servant intentionally mistreated Holley by kicking him.

‘This is the only thing I’ve ever wanted to do in my entire life,’ Blomberg said, referring to being a police officer.

‘And I’m just glad this part is finally over.’

He said he will ‘take a deep breath’ before deciding whether to pursue another job in law enforcement.

During his trial, Blomberg, who is white, testified that he didn’t mistreat Holley and denied kicking or stomping on the teen’s head or neck. He said he only used his foot to move Holley’s arm after he refused to comply with an order to put his hands behind his back. 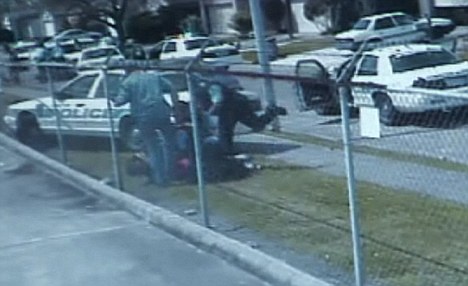 Caught on camera: The beating, which was captured by an activist with a cell phone camera, shows several officers surrounding the teen

Jurors declined to comment after the verdict and have asked that their identities be sealed.

Community activists who were gathered in the hallway outside the courtroom yelled ‘Racism!’ and ‘injustice!’ after hearing the outcome.

‘It is pathetic. It is unacceptable,’ the Rev James Dixon of the Community of Faith Church said of the jury’s decision.

‘This kind of expression says to me, to my children and to every black child in the city, “Your life is not worth manure.”‘

Quanell X, the community activist who had released the video of the alleged beating to the media, called the verdict ‘wrong’ and criticized the lack of blacks or other minorities on the six-person jury. 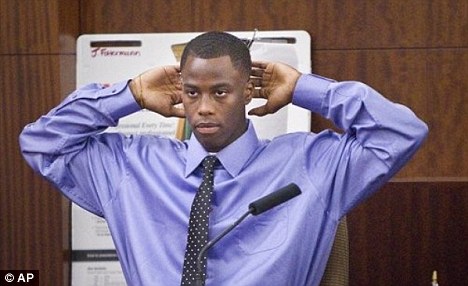 Surrender: Chad Holley, now 18, testified that he put his hands behind his head and did not resist the officers who beat him

‘They knew what they were doing with an all-white jury,’ he said.

Blomberg denied that his actions during the arrest were racially motivated. To those who insist Holley was treated a certain way because of his race, Blomberg said, ‘They weren’t out there that day.’

His attorney, Dick DeGuerin, also said, ‘It is not and was not a racial thing.’

‘It’s been made into that by others for their own reasons,’ he said.

Asked why there weren’t any blacks or minorities on the jury, DeGuerin said most of the African-Americans in the jury pool had already made up their minds that Blomberg was guilty.

Holley was convicted of burglary in juvenile court in October 2010 and placed on probation.

A federal lawsuit Holley filed against Blomberg, the other fired officers and the city of Houston is pending.