After a campaign of terror in the 1990s, in which civilians had their limbs cut off by rebels, Sierra Leone has thousands of disabled people. They are generally marginalised by the rest of society but now, the police force has recruited its first ever disabled officers, as Martin Davies reports from the capital, Freetown.
Four men have been taken into the force – a decision welcomed by rights activists who have longed campaigned for an end to the discrimination that disabled people face in Sierra Leone.
About two-thirds of disabled people are unemployed, forcing many of them to turn to begging on the streets, the activist says.

So, it is not surprising to find one of the recruits, PC Shecka Conteh, beaming as he peaks out from his over-sized brand new officers hat alongside fellow recruit PC Paul Diabate.

Both men contracted polio when they were children. It left them with weakened legs causing them to limp.
PC Conteh remembers the day he read a list of candidates recruited into the force.
“I saw my name and address and I was a very happy man. The lecturers [at a police college where he trained] and my colleagues have welcomed me with open arms,” he says.
For now, the new officers will not be seen on the beat. They work at the Police Communications Centre in the capital, Freetown, where they are deployed on the force’s new telephone system, taking calls from the public, as well as undertaking other desk jobs.
Cyber crime
The recruits were helped in attaining their jobs by organisations working with disabled people.
One of these groups is the Leonard Cheshire Foundation (LCF).
In a survey carried out mainly in urban areas in 2009, LCF found that 70% of disabled people had no access to income and a similar number were without jobs. 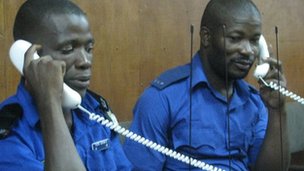 The first recruits have been given desk jobs

LCF regional programme manager Osman Bah said he was delighted the organisation’s prodigies were now in the police force.
“These disabled officers are the first in the history of Sierra Leone and perhaps the first in West Africa,” he said.
The officers joined the police after qualifying with professional IT and computing skills.
The scheme was created by Abs Dumbuya, who contracted polio as a young man in Sierra Leone, left to study in the UK and then returned to create opportunities for disabled young people, through his organisation, the Dorothy Springer Trust.
“As IT specialists they [the recruits] are serving a purpose in the force,” he says.
“We are telling Sierra Leonean society that it doesn’t matter if you are disabled or not. If you have got the qualifications and the ability and the competency, then disability shouldn’t matter.”
It was an argument that Mr Dumbuya used on Sierra Leone’s police chief, Inspector-General Francis Aliou Munu.
Attracting attention

The force has more than 11,000 policemen and its senior officers acknowledge that not all of them need to be on the streets, especially when a good deal of modern crime concerns computer-based fraud and security.

Inspector-General Munu says disabled policemen will help the force win public trust.
“When you see a disabled officer you do not have a perception of any immediate threat. The police should be looked at as not only using force but using persuasive and other non-confrontational methods,” he said.
The recruitment of disabled officers also owes something to the fact that a Disability Act was passed in Sierra Leone last year.
Police acknowledge that the law helps create a climate in which disability rights are considered more favourably.
“Since the passage of the Disability Act, we wanted to put into practice what the Act seeks to achieve on behalf of disabled people,” Inspector-General Munu says.

When I am in my uniform on the streets, people – disabled and able-bodied people – ask me questions”

Since so many disabled people are on the streets – begging and living in squalor, we wanted to make a U-turn for them and give them a purpose.”

The Act also calls for the creation of a national commission on disability.
It is still to come into effect and is designed to collect information about discrimination and abuse faced by disabled people, and to hold the perpetrators to account.
When it was put to him that recruiting disabled officers could be construed as a public relations exercise, Inspector-General Manu said that his was a modernising force and that, along with every member of staff, the disabled officers’ performance would be managed to ensure they were assisting the force in achieving its aims.
The disabled officers might not be on the beat but when out and about they are attracting attention and challenging perceptions.
PC Conteh says he was stopped on the street by the minister of defence who wanted to engage him in conversation.
PC Diabate also finds that his presence as a disabled man in a uniform, with a walking stick, is provoking interest.
“When I am in my uniform on the streets, people – disabled and able-bodied people – ask me questions and I explain how, as a disabled person, I have managed.”
http://www.bbc.co.uk/news/world-africa-20677639