By RICHARD SHEARS
PUBLISHED: 06:25 EST, 22 March 2013 | UPDATED: 08:29 EST, 22 March 2013
A convicted rapist and cult leader known as Black Jesus, who was accused of murdering three girls and then eating their flesh and drinking their blood, has escaped from jail with 48 other prisoners.
A huge manhunt is underway in Papua New Guinea’s jungles for Stephen Tari and the other inmates, who broke out of prison in Madang in the north of the country while a guard changed shift.
Police have warned that some of the escapees are very dangerous and stressed officers are working ‘around the clock’ to catch them. 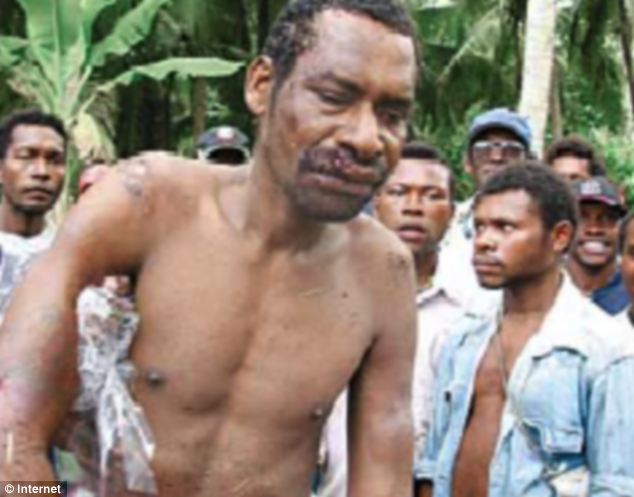 ‘Black Jesus’: Notorious cult leader Stephen Tari after he was captured in Papua New Guinea in 2007

Tari, 40, a failed Bible class student, called himself Black Jesus as he travelled through the highland jungles in 2006, gathering thousands of disciples who moved with him, following his instructions to increase his ‘flock’.
But he was also accused of raping three young girls, murdering them and then drinking their blood and eating their flesh.

Villagers eventually captured him in March 2007, beat him into unconsciousness, tied him up and handed him over to police.

In 2010 he was convicted of four counts of rape but was not charged with murder due to lack of evidence, despite protests by the relatives of three dead girls.
Now the enigmatic figure, who wore long white robes as he stood on a rock in a jungle clearing and preached his own gospel to his disciples, has sparked fears that he plans to look for new followers with his escape.

Capture: The feared Tari was beaten by villagers and tied up before being handed over to the police

‘While the shift was taking place, the detainees used a tool to cut through a fence and they left for freedom.’

‘We’re working around the clock to find Stephen Tari and the other men,’ said Madang’s Acting Provincial Police Commander Inspector Jacob Bando.
During his days of freedom he gathered more than six thousand disciples by telling them they would recieve gifts from heaven if they followed him. 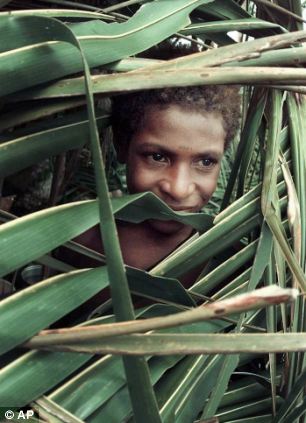 Followers: Tari gathered more than six thousand disciples with his preaching in the jungles (library image)

But jungle communities were horrified to be told that Stephen Tari had sacrificed three young women, drinking their blood and eating their flesh as part of his bizarre religious ceremonies.
In one case, a mother who had fallen under his influence, drank her daughter’s blood, according to relatives who the Daily Mail spoke to at the time. He gradually became a figure of fear.
Tari was eventually captured in the small village of Matapi, a seven-hour walk from the nearest road.
Church pastor Paul Makura said it had been difficult for police to catch Tari as he never stayed for long in one place and was always warned by his disciples when police were in the area.
When he turned up in Matapi villa, frightened villagers pounced on him while he was sleeping in a hut and tied him up.

Messages were passed through villages until one man with a mobile phone was able to get a call to police in the town of Madang.

Heavily-armed officers found the badly-beaten Tari tied to a makeshift stretcher when they arrived in the village.

There was no sign of Black Jesus’ bow-and-arrow bodyguards who on an earlier occasion when Tari escaped had engaged in a fight to the death with police.

Student who introduced the President at graduation reveals gritty reality of the projects where he grew up plagued by drug addicts, prostitutes and poverty